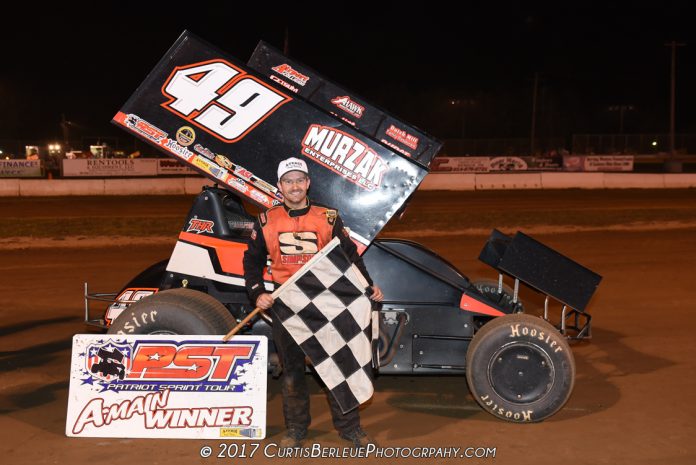 MERCER, PA – It has been quite the year for Scott Kreutter since teaming up with Trey Hoddick in the No. 49 as the team picked up $4,000 and their second Patriot Sprint Tour win of the season at the Mercer Raceway Park over Steve Collins and Dylan Westbrook.

Kreutter and Collins would bring the field to the initial green flag, with the two breaking away from the field until they met lap traffic. Collins would remain in second through the balance of the race as he was unable to get by Kreutter.

Westbrook, who started sixth began to make his way to the front to challenge Collins for the runner up spot but failed to complete a pass.

Kreutter would pull away in the second half of the race and take his second Patriot Sprint Tour win of the season. Steve Collins takes another podium run holding off Dylan Westbrook. Ryan Coniam and Dennis Wagner would complete the top five.

After succumbing to rain on the originally scheduled date back in July, a rare August appearance for the Patriot Sprint Tour at the Mercer County oval saw 18 360 sprints in the pits for the make-up event presented by Bonnell’s Collision Centers.

After taking the win at Ransomville the night prior, Chuck Hebing was unable to make it into the redraw but would take the Evingham Site Excavation Dash for Cash win.

Current point leader and defending champion Jared Zimbardi would bounce back from a slow start to his night and earn the Casey’s Truck Salvage ‘Salvage of the Night’ award worth $50. Darrell Bragman took home the $50 Prestige Pool and Spa Final Finisher Award, and Mike Koehler would finish 11th earning him the Shuttleworth Asphalt Sealing 11th place finisher award, also worth $50.

Going into the final four point paying events of the 2017 season, Steve Collins has yet again closed the margin in the standings. Jared Zimbardi now only leads Collins by 22 points – the closest margin since the May 14 of this season.