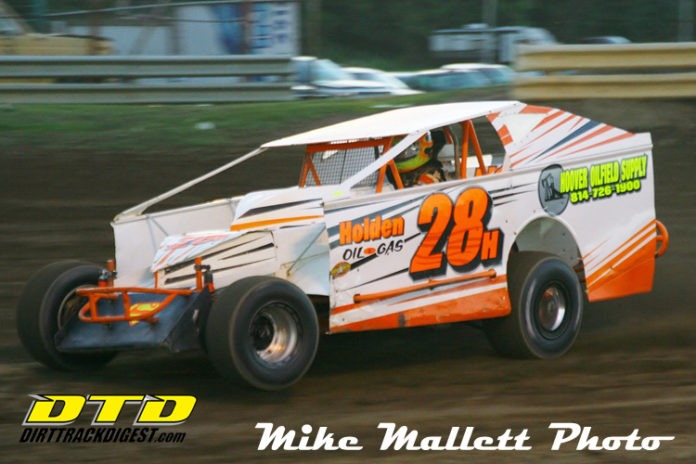 After methodically working his way into the top five, Jimmy Holden used two fantastic restarts to get to the front in the Turn 4 Toilets 358 Modified featured feature. The first was a powerful drive on the outside to take second away from Jeff Schaffer, Sr. on lap 12. The final move was two laps later, when he got the jump on leader Lonny Riggs.

Riggs and Schaffer Sr. were locked in a battle for the lead over the first half of the race. Riggs took over the point on the lap eleven restart. Meanwhile, Holden was quietly coming forward from his ninth place starting position. As he did so, Tom Glenn and Jason Sines remained firmly in the top five.

At the checkers, it was Holden, Riggs, Schaffer, Glenn, and Greg Martin. Phil Vigneri edged out Sines for sixth. Tommy Kristyak came from fifteenth to get eighth. Kevin Hoffman and John Smith were also top ten runners.
Glenn and Holden were first to cross in their respective heats. There was no B Main.

In the Bonnell’s Rod Shop 305 Sprints, the Ohio contingent took the podium spots, with Dustin Rull going flag to flag. Matt Foos came on late in the race for second, and Bobby Clark came along for third. Cody Bova, who split time between Mercer Raceway Park and the Ohio tracks in 2017, was the first local to cross the line. Gregg McCandless was fifth. Andy Priest, Devin Litwiler, C.J. Jones, Frank Neill, and Jeremy Kornbau were the next five finishers. It was bittersweet for Kornbau, who spun off the top of turn four as he was making a bid for the lead in the early stages of the race. McCandless and Litwiler copped the preliminaries. There was no B Main.

In the Open Stock Cars, Tim Bish snatched the lead away from Bobby Heim on the opening round, and held control over the course of the twenty lap affair. Heim kept former track champion Bill Hurrelbrink at bay, while Jacob Billyk and Mike Miller held top five positions throughout. The battles were for positions six through ten, with Bob McCann, Andy Thompson, Pat Fielding, Charlie McMillin, and Jamie Sharba mixing things up through most of the contest. However, when the checkers flew, it was Andy Thompson in sixth, Mark Thompson up to seventh, then McCann, Terry Wheeler, and Troy Norman completing the top ten. Hurrelbrink, Brent Johnson, and Bish were heat winners. Fielding took the B Main.

In the maiden voyage for the RUSH Sportsmen Modifieds at Mercer Raceway Park, Chaz Wolbert took the lead at the outset, and was never headed in the twenty lapper. However, Justin Shea made several challenges for the the top spot over the second half of the contest. Shea even tried to loosen him up in the final corners, but Shea could not take advantage of the bump and run tactic. Kole Holden was third, after racing up to second around the middle of the race. Brandon Ritchey and Rocky Kugel completed the top five. Sid Unverzagt, Jr., Chad Gump, Jerry Schaffer, Kyle Martel, and Alan Dellinger rounded out the top ten. Gump, Steve Slater, and Brian Shaffer topped their respective qualifiers, and Josh Deems was best in the B Main.

Jeff Heafke tracked down early leader Ryan Fredericks and went on to victory in the 270 Micro Sprint feature. Brandon Fredericks was second, with Ryan in third at the finish. Todd Reusser and Tim Eakin were fourth and fifth. John Walker, Austin Pasquerella, Brandon Hawkins, Noah Wirgini, and Chase Matheny were sixth through tenth. Dave Hawkins, Metheny, and Luke Kroboth were fastest in their heat races. There was no B Main.

Josh Ferry inherited a front row starting position in the Two Barrel Econo Modified feature when leader Gary Miller spun in turn four before the first lap was completed. Ferry made the best of the opportunity, claiming the top spot when the race officially started. Brandon Blackshear chased him the entire fifteen laps, but could not make a move for the win. Steve Haefke, Brad Blackshear, and Nate Young rounded out the top five. Josh Mueller, Mitchell Wright, Keith Felicetty, Miller, and Ray Gregory were the next five across the finish line. Heat victories went to Brandon Blackshear and Ferry. There was no B Main.

Evan Darby started on the pole and led the entire distance to claim the Young Guns Junior Sprint feature event. Mike Lutz, Jr. took second from Jordan Simmons with one lap down, and he held the position to the finish as well. Tyler Allison, Stone Lapcevich and Luke Mulichak completed the top five. Simmons was sixth despite spinning on the final lap of the contest. Jaren Dye, Samuel Darby, and Alston Randall were the remaining competitors. The heat victory belonged to Samuel Darby.

Alan Dellinger, who has dominated just about every class that he has raced in throughout Western Pennsylvania, picked up his second win of the season in the Rock Concrete Supply Modified Lites. He overtook Doug Stanley, another seasoned racer, on lap nine. The race was marred by a major crash in turn one with eleven laps completed. While heavy damage was inflicted on several machines, all of the drivers were reported to be without harm. Chris Logan grabbed third soon after racing resumed, and kept it for the remainder of the race. Rod Jones finished a notch ahead of his daughter, Vivian. Jeff Davis, Cole Petrelle, Brent Begolo, Josh Wyer, and Bobby Springer completed the top ten. Mark Marcucci, Tracy Fritter, and Shawn Sliter were tops in their respective heat races. There was no B Main.

In the finale for the Mini Stocks, offered by Ray’s Racing Collectibles and Eperthener’s Auto Wrecking, J.R. Shaner earned his first career win, over Dillon Speer, who was also seeking that cherished first victory. Shaner took the lead from his front row starting spot, but he had to hold off Speer, who was closing fast. Mike Porterfield was third, ahead of Jason Shaw and Rick Feely. Darrell Lawson, Jr., Chris Knight, Will Aley, Ed Haylett, and Tyler Young finished sixth through tenth. Aley, Lawson, and Shane Shook took heat wins. There was no B Main.