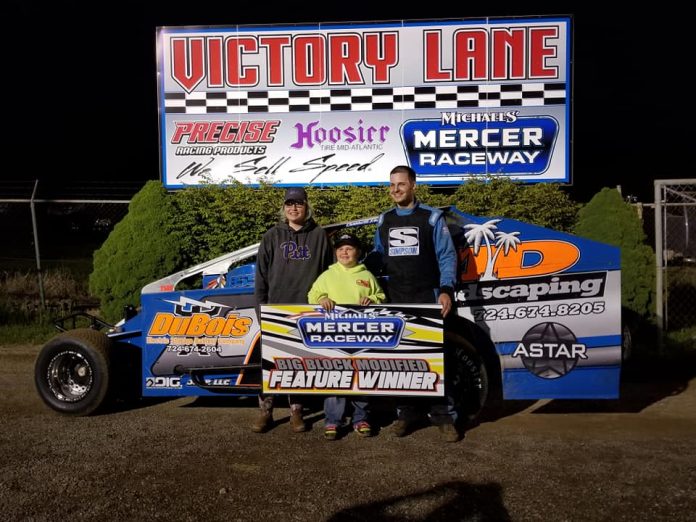 Krummert, a very tired but happy driver, owns his own Big Block but is a hired gun in the Fastrak division. He gave props to his Fastrak car owner, Jerry Schaffer, and all of the family, friends, and crew that helped him get to victory lane twice. Krummert thought that he would run second to Rex King, Sr. when he saw the starting line-up, “I’ll be honest, when I saw Rex on the outside front row, I figured if we could run second, it would be a good night, and early on, we went to the top in one and two and it sucked.” But, after switching lines, he developed a lead over King Sr. “I thought that we’d be alright, so anytime you beat the Kings here, you beat the best. I was so tired, so maybe the old saying is slower is faster is probably true.” Krummert summed things up by thanking the fans and the Michaels family for reopening the track. “You can’t win two if they’re not open.”

Some of the division’s heavy hitters started at the front of the 25 lap feature for the Diehl Ram Big Block Modifieds. Kyle Fink was on the pole, with Rex King, Sr. on his flank. J.R. McGinley and Krummert were in the second row. Tommy Glenn and Jeremiah Shingledecker were in row three. Two-time winner Rex King, Jr. lined up in the seventh spot, with Erik Martin beside him. Lonnie Riggs and Dave Murdick rounded out the top ten for the start.

When the green flag was displayed, Rex King Sr. seized the lead, but a caution on lap one set up a restart.
This time, Krummert was up for the challenge. He led King into turn one, with Fink, Shingledecker, McGinley, and King Jr. in tow. Krummert maintained the advantage through the next caution, on lap five, for another two-car tangle.

On the ensuing restart, Krummert led, but King Sr. was applying the pressure. Fink raced along in third, but McGinley and Shingledecker were swapping the fourth spot. Riggs entered the picture, dicing with King Jr. for sixth. Murdick, Kevin Hoffman, and Jimmy Holden were also fighting for positions in the top ten. Holden’s run was impressive to that point as he started in the eleventh row after suffering a motor problem in his heat race.

With nine laps remaining, the race had its final stoppage for another two-car jingle. Krummert took the lead again, but King Sr. got is nose ahead to lead lap 18. Fink was third, and challenging. Shingledecker held down fourth, and Riggs was up to fifth after McGinley pitted for a fresh tire unded that caution. Krummert regained the point, and now Fink was working over King Sr. for the second spot. Their battle would rage until the end of the race.

Krummert stretched his advantage to over 1.7 seconds at the checkers. King Sr. was second, with Fink, Shingledecker, and Riggs completing the top five. King Jr. led the second batch to the finish line. Murdick, Hoffman, and Holden were next across. Will Thomas grabbed the tenth spot.

There were three heats for the 23 cars on hand. Wins went to King Sr., Riggs, and Krummert. There was no B Main.

In the Turn 4 Toilets Fastrak Modifieds, Brandon Ritchey and Garrett Krummert had the first row. Lined up in the second row for the 20 lapper were Gage Priester and Jerry Schaffer. Michael Kristyak and Brian Sadler were in the third row. Erik Martin, Tom Urey, Shayne Izzo, and Jim Bryce were the other starters in the top ten.

Krummert jumped out front, followed by Ritchey, J. Schaffer, Kristyak, and Sadler. Five laps into the race, J. Schaffer took second away from Ritchey. Martin worked his way up to fourth, while Kristyak was fighting with Brian Schaffer for fifth. On lap ten, Martin’s strong run came to an end, as he brought out the second caution of the race.

The racers reeled off another six rounds without interruption. While Krummert and Ritchey ran out front, there was a family feud between Jerry and Brian Schaffer for the third position. Izzo and Sadler were racing in fifth and sixth when the final caution was displayed.

There were no changes in the running order at the front of the field over the final four laps, which was a bit of a surprise given the fact that Izzo was driving a wounded car. His mount sustained a bent rear wheel.
Following Krummert, Ritchey, B. Schaffer, J. Schaffer, Izzo, and Sadler were Jason Huffnagle, Dillon Barr, Josh Hinchberger, and Clayton Deems.

The pair of heats went to Krummert and Izzo. No B Main was needed for the 18 cars that registered.

Greg Dobroski led wire to wire in the Hards Welding and Fabrication/River Valley Butcher Block Racesaver 305 Sprints. He started on the pole, with Kyle Colwell on the outside. Chad Hill made his first start of the season in third, with Will Fleming next to him. Andy Cavanaugh and Nathan Kline were in the third row for the start of the 15 lap contest.

At the green, Dobroski surged ahead. Fleming immediately went to second, followed by Colwell, Hill, and Cavanaugh. Johnny Walker brought out the first yellow on lap four, but the more significant incident was the two-car incident on lap six involving Hill and Cavanaugh. Hill was done, but Cavanaugh was able to continue.

Over the final nine laps, Vince Daugherty was moving forward. He reached third by the time the checkers were shown to the field. Dobrosky and Fleming saw them first, of course. Colwell was fourth and Jacob Gomola in fifth. Kline, Chase Matheney, Cavanaugh, Walker, and Toby Hanlon completed the top ten.
Preliminaries went to Hill and Gomola. There was no B Main for the dozen competitors.

It was a father and daughter front row for the Barris Trucking Modified Lites. Vivian Jones had the pole and Rod the outside. Cole Petrelle and Logan Lewis were in the second row and Ayden Cipriano and Chris Robinson in the third.

Rod led Vivian into turn one, followed by Petrelle, Lewis, and Cipriano. Cipriano brought out the first of several cautions. On the restart, Robinson, Petrelle, and Lewis moved ahead. A handful of laps later, Robinson took the lead. Rod Jones continued in second fo4r another lap before retiring from the race.

Robinson led the rest of the way. Teddy Williams raced up to second from tenth on the grid. Shane Webb was third. Jeff Davis nipped Jacob Isenhart at the finish line by the slimmest of margins, .001 seconds, to claim fourth. Dusty Frantz, Jordan Simmons, Charlie Armstrong, Tiffany Williams, and Eric Marsh completed the top ten.

Three heats sorted the twenty-four car field. Ted Williams, Petrelle, and Rod Jones were the winners. There was no B Main.

Another big field signed in for the Ray’s Racing Collectibles and Eperthener’s Auto Wrecking Mini Stocks. DeWayne Redinger led the first two laps from his front row starting spot. But Shane Shook climbed from tenth to take the lead on lap three, while Mike Porterfield came from sixth to third. He took second on lap five and gave chase until the final laps of the race.

There will be no racing on the oval at Michaels Mercer Raceway over the Memorial Day holiday weekend. Instead, the pulling pit will be the center of attention. An exciting program will be presented for all sorts of trucks and tractors under the leadership of the Northwest PA Pullers Association and Power Pull Productions. Racing will resume on the track June 1. It will be a Fast Five program, along with Junior Sprints and bicycle races for the children presented by Ray’s Racing Collectibles. It will also be Twin State Auto Racing Club night.