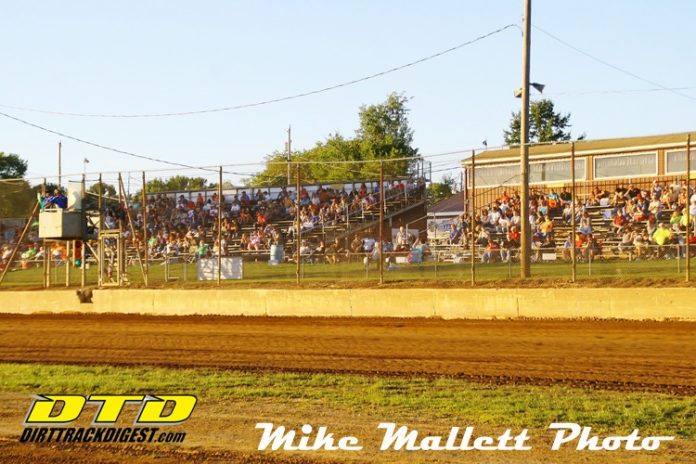 MERCER, PA – This Saturday, June 1, will be one of the busiest nights at Michaels Mercer Raceway, plus it will be Twin State Auto Racing Club Night. Joining the Fast Five will be the Junior Sprints and bicycle races for the children. The action will start at 7 p.m., with gates opening for the racers at 4 p.m. and the spectators at 5 p.m.

Garrett Krummert, of New Castle, will lead the charge. With multiple wins in the Turn 4 Toilets Fastrak Limited Modifieds and one in the Diehl Ram Big Block Modifieds, Krummert has been the most successful racer at the track so far this season. Plus, he has scored a Big Block win at another area speedway.

More than two dozen rivals will challenge Krummert for the honors in the Diehl Ram Modifieds. Rex King Jr. has a pair of wins, but his father has been in the hunt also. Jimmy Holden and Lonny Riggs have showed plenty of speed, as have Kyle Fink, J.R. McGinley, Dave Murdick and Jeremiah Shingledecker, to name just a few.

The competition will be just as fierce in the Turn 4 Toilets Fastrak division. Steve Slater, a winner once this season, will be looking to rebound from a disappointing outing. Jerry and Brian Shaffer, Brian Sadler, and at least a dozen more want their moment of glory, too.

Greg Dobrosky, Rob Felix, and Jacob Gomola will each try to get their second victories in the Racesaver 305 Sprint Cars presented by Hards Welding and Fabrication and River Valley Butcher Block. Will Fleming , Kyle Colwell, and Vincent Daughtery have been impressive of late, but they have yet to grab the checkers. Maybe they can do it this week.

The Barris Trucking Modified Lites have been have been highly competitive so far this season. Chris Robinson won the last time out. Vivian Jones and Alan Knepper have also graced victory lane. But veterans like Rod Jones, Shayne Webb, Cole Petrelle, and many others will battle hard for the win.

The Mini Stocks presented by Ray’s Racing Collectibles and Eperthener’s Auto Wrecking have brought huge fields and thrilling action to the track every week. More than thirty competitors, including Shane Shook, Todd Hanlon, Joe Campbell, Pete Blaczak, Tim Callahan, and Steve and Karlee Longwell will go door to door for the win.

The Junior Sprints will make their first appearance of 2019 at the speedway. The division, which was created to introduce a newer generation into the world of motorsports, has already graduated several racers into the higher ranks at Michaels Mercer Raceway, including Chase Metheny, Ayden Cipriano, Roman Jones, and Mike Lutz, Jr., to name a few. Come out to see who will be next.

Ray’s Racing Collectibles will also present the children’s bicycle races this Saturday night. Parents and guardians, please note that the all children must have helmets to be able to race.