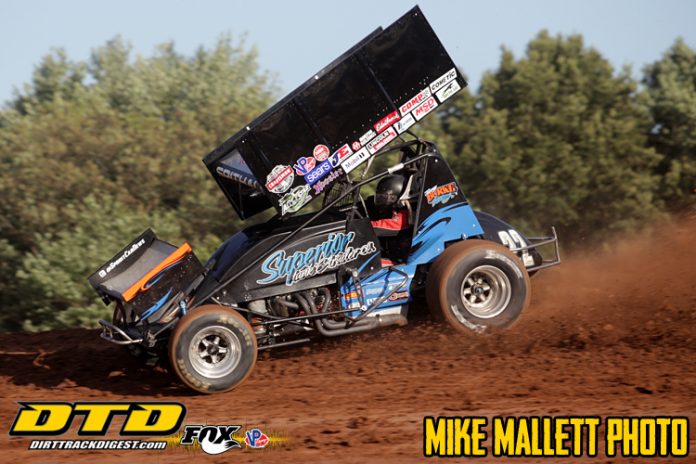 MERCER, PA – Sporting teal accents on his black machine, Brandon Spithaler proved that pretty race cars can also be fast ones. The driver from nearby Evans City, PA romped to victory in the Buddy Barris Trucking Memorial Summer Nationals for 410 Sprint Cars at Michaels Mercer Raceway.

Also getting prized passes to victory lane were Todd Reusser in the 270 Micros, Vivian Jones in the Barris Trucking Modified Lites, and Joe Campbell in the Ray’s Racing Collectibles and Eperthener’s Auto Wrecking Mini Stocks.

Spithaler, who has returned to the local racing scene for the 2019 season, said “it feels amazing; it’s been two years since we’ve been in victory lane; there’s been a lot of awesome times. We traveled all over the place with the All Stars, and came back to Western PA.”He ran hard throughout the race, not knowing how close his pursuer, Jack Sodeman, Jr., was.”I got through traffic better than he did.” When he got to some open track, Spithaler continued to pour it on. “If you say we had a big lead,” as his voice trailed off. Then, he exclaimed, “we need 410s here next year!” The crowd roared in approval.

Using the format made successful in the Central Pennsylvania Sprint Speedweek, Spithaler was joined by the other two heat race winners, Gary Kriess and Sye Lynch, and the three fastest qualifiers, Dan Kuriger, Jack Sodeman, Jr., and Michael Bauer, for the blind draw that would set the first three rows for the thirty lap feature. Kriess was the lucky one, getting the pole, but Spithaler was his running mate. Sodeman and Bauer were next, followed by Kuriger and Lynch. Other quick cars lined up behind them, that being Carl Bowser, Andrew Palker, Brandon Matus, and Jordan Ryan.

Kriess got the early lead, with Spithaler, Sodeman, Bauer, Kuriger, and Lynch in tow. They ran in that order through lap five, when the leaders started to encounter the slower traffic. Spithaler snagged the lead on lap seven, and Kriess began to fade from the lead group. That moved Sodeman up a notch, but Spithaler had several lapped cars separating himself from the second place car.


A caution on lap twelve for Leyton Wagner and Arnie Kent realigned the field and put Sodeman on Spithaler’s rear nerf bar for the restart. Once again, Spithaler took the lead and Sodeman was giving chase. Bauer, Lynch, and Kuriger had worked their way past Kriess, and they were wresting for the third spot. Lynch got control of that by lap fifteen. Kuriger slipped by Bauer, and Bowser was now in the picture, too.

Palker brought out the final caution, on lap seventeen. That bunched the field back up again, and gave Bowser the opportunity to take over fifth. He did so on lap nineteen.

Over the final ten laps, the battle was on for positions in the top ten. Andy Priest picked up several positions, as did Russ Sansosti, and Jimmy Morris. Cody Bova was on the charge, too, coming up from his nineteenth starting spot after capturing the B Main. While Bova obviously recovered from his hard crash during time trials, he did not reach the top ten by the time the checkers flew.

Spithaler got the $4,000 win, followed by Sodeman, and Lynch. Kuriger and Bowser were next. Priest had the sixth spot. Jordan, Sansosti, Morris, and Joe McEwen rounded out the top ten.

Thirty Sprints signed in for the only winged 410 race of the season at Michaels Mercer Raceway. Remember that there will be another winged sprint special, this time for the Patriot (360) Sprint Tour, coming on August 10, 2019.

Rebounding from some misfortunes the night before, Todd Reusser charged from fourth to the front on the opening lap of the 270 Micro feature. Jeff Haefke raced in second, followed by C.J. Davis, Lonnie McConahy, and Wes Libert. Eight laps into the fray, Libert came to a stop for the first of two cautions.

Soon after the restart, Brian Borawiec moved into second, a position that he would hold until the finish. Haefke continued in third until the final lap when he pulled into the pits unexpectedly.

Following Reusser and Borawiec across the finish line were McConahy, Noah Wirginis, Dustin Young, Ivan Johnson, and Paul Young. Then came Haefke based on laps completed. Garth Focher and Luke Hails were ninth and tenth.

Libert and Reusser topped the qualification heats. There was no B Main necessary fo the seventeen cars on hand.

In the Barris Trucking Modified Lite feature, Cole Petrelle took the lead when the green flag waved. He was followed closely by the Jones family. Vivian was the first to give chase, by Rod took up the cause on lap six. The third member, Roman, remained in the top five through lap six.

On lap six, Jeff Davis passed both Petrelle and Vivian Jones to take the lead. Rod Jones was shuffled back a few positions, as Dusty Frantz, Jordan Simmons, and Tyler Purnell entered the picture.

Davis’ bid for victory ended on lap eleven when he spun while leading. That put Vivian Jones on the point for the restart. Meanwhile, her father worked his way into second.

The final several laps were ragged, and the race was called to curfew as the drivers were having troubles stringing laps together without incidents.

The trio of heats were won by Vivian Jones, Shane Webb (form last on the grid), and Rod Jones. There was no B Main for the twenty-one machines.

The Ray’s Racing Collectibles and Eperthener’s Auto Wrecking Mini Stocks brought twenty-six cars to the party. Tim Callahan and Joe Campbell fought for the lead throughout the twelve lap nightcap. Callahan led until the final lap, when he went low to block Campbell’s inside move. Campbell switched to the high line, though, and went on to victory.

Preliminaries belonged to Romanko, Bill Fuchs, and Porterfield. There was no B Main.

The Big Block Modifieds will be back to Michaels Mercer Raceway after nearly a month off. The Diehl Ram racers will take on the stars of the BRP Modified Tour in a July 20 race that will pay a top prize of $3,000. This will be the Michaels Memorial Show sponsored by Erme’s Inc. Also returning to the card will be the Turn 4 Toilets Fastrak Limited Modifieds. The Racesaver 305
Sprints will be on the card as well, along with Mod Lites, Mini Stocks, and Vintage Cars. There will be an autograph session, allowing the fans to meet and greet the heroes, both old and new. The race will carry a rain date of July 27. If the rain date is not used, a regular Fast Five program will be held in its place.