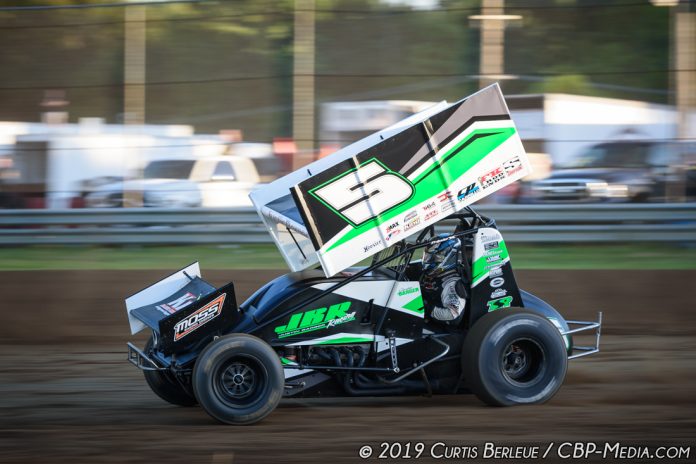 MERCER, PA – It has been since 2015 since Justin Barger has won a Patriot Sprint Tour A-Main but all of that changed Saturday night at Michaels Mercer Raceway when the Cornelius, NC driver led all 25 laps and held off rookie Matt Farnham and veteran, Jared Zimbardi.

“We were able to move around a lot and I think that’s what got us the win” stated Barger. “Usually when you get to lap traffic and you are the leader, you don’t really want that but we had a few chances to get a couple good laps in to pull away and we did.”

Barger started alongside Matt Farnham who was making his first ever start in a 360-sprint car after a couple starts in a Crate Sprint at Ohsweken.

Barger would pull out to an early race lead but Farnham would still be in the striking distance as they encountered lap traffic early on lap five which allowed Farnham to show Barger his nose wing a couple times in the first half of the race.

The only caution that occurred in the 25-lap affair was on lap 12 with Steve Glover spun in turn two and that would restack the field. Barger would lead Farnham, Zimbardi and Davie Franek who started tenth.


The clean air would play in Barger’s favor on the restart as he would build an advantage once again on the restart, but that lead would be all but gone on lap 16 when he again met lap traffic and both Farnham and Zimbardi would be right there racing for top position.

Barger would continue to weave through lap traffic which would only help him because Farnham and Zimbardi would also have their own battle for that runner up spot. The track began to get narrow which did not help a hard charging Davie Franek as he was stuck in fourth after advancing six positions early.

Farnham and Zimbardi had one last opportunity on lap 23 to challenge Barger but just could not get by the race leader. Barger would take home the win, followed by rookie Matt Farnham, Jared Zimbardi, Davie Franek and NRA competitor, Hud Horton.

For Barger, this was career win No. 14 which ties him for ninth all time in tour history and his first win with the Patriots since 2015 when he was a winner at Woodhull.

“This win feels good, we are eight hours south of here now in Charlotte, so it makes things tougher to come north” Barger Continued. “We always love it when we do and its even better when you pick up a win!”

Matt Farnham had to settle for second, but he certainly exceeded his expectations being his first ever start in a 360-sprint car racing for Trey Hoddick.

“The car was really good, I can’t thank the entire Hoddick racing team enough” Farnham said “Me and Justin had a lot of good racing out there and for my first time in a 360, I couldn’t ask for anything better.”

Jared Zimbardi take home yet another top five and finishes on the podium for the fourth time in 2019.

“Mercer has always been big on track position and a lot depends on where you start.” Zimbardi commented. “The top kind of went away on us in one and two, but you still cant make mistakes when you are out front.”

Davie Franek would settle for fourth who has been a bit of slump with PST as of late with no podium finishes since July 12. NRA competitor Hud Horton would finish fifth. Other notable finishes for the Patriot Sprint Tour is Joe Trenca finishing 14th and Jordan Thomas would finish 15th.

The Patriots will challenge the NRA Sprint Invaders for the second consecutive night at Eriez Speedway. Please be sure to visit patriotsprinttour.com for continued info and to also connect with us on Facebook, Instagram and Twitter.