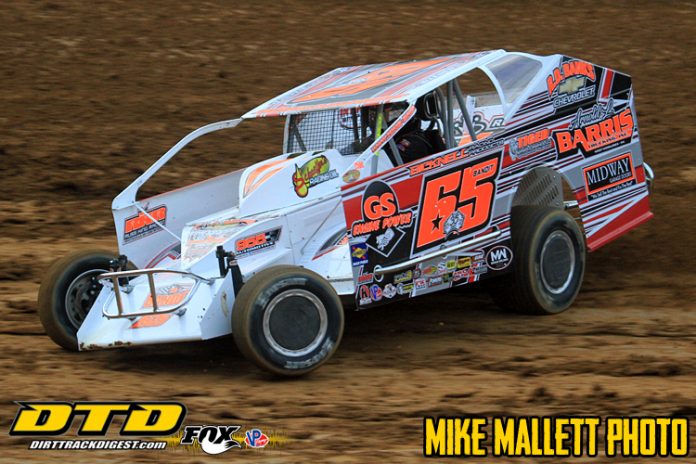 MERCER, PA – Feature wins by Rex King, Sr. and Brian Schaffer left no doubt who would would be crowned as the champions in the Diehl Ram Big Block Modifieds and the Turn 4 Toilets Fastrak Limited Modifieds, respectively.

“It was a lot of fun,” said a happy Rex King, Sr. after scoring the win that sealed his second track championship at Michaels Mercer Raceway. His first title came back in 1995, when Big Block Modifieds were the highlight of the racing program.

In the Diehl Ram Big Block Modifieds, Kyle Fink and Rex King, Jr. led the field to the green flag for the final regular-season race. King, Sr. lined up in third next to Dave Murdick. Tom Glenn and Jimmy Holden were in row three and Skip Moore and Bob Warren were in row four. Row five belonged to J.R. McGinley and Brad Rapp.

King Jr. grabbed the early lead, and it looked like he might be able to make up the two-point deficit that existed after the heats were finished. But his father slipped into second, meaning that a such a finish would clinch the title for Senior by just one marker. Murdick rode along in third, but he needed to pass them both if he had any hope of winning the title.


While the three title contenders distanced themselves from the rest of the field, Fink was keeping Holden, Rapp, Glenn, Moore, and McGinley at bay.

On lap sixteen, King Sr. dove low entering turn one. He was able to make the pass for the lead, and Junior was seeing his hope of a first track title slip away. “It was just hard racing,” the racing patriarch commented. “I’m not going to give Cooter anything and he’s not going to give me anything. It’s 110% for both of us. I’m sure that my wife was having a fit back there when we were close, but, you know what, it’s good racing!”

A couple of laps later, Murdick saw an opening when he and King, Jr. were lapping a slower car, and now he was in the chase position. Murdick tried to close in on King, Sr., but he was unable to make a move on the wily veteran.

At the checkers, it was King Sr., followed by Murdick, King Jr., Holden, and Fink. Rapp came home in sixth, ahead of McGinley, Moore, Rick Regalski, and Glenn. The event was run non-stop.

Taking heat race wins were King Sr. and Moore. There was no B Main.

Brian Schaffer launched his title run from the pole position for the twenty lap Turn 4 Toilets Fastrak Limited Modified feature. Next to him was Eric Gabany. Brian Sadler was paired up with Shayne Izzo, who led the points in the division for most of the season. Jim Bryce and Dave Murdick were in row three, with Steve Slater and Rick Regalski in row four. Jerry Schaffer and Erik Martin had row five covered.

Brian Schaffer and Gabany took off at the drop of the green. “He’s a lot of fun to race with,” Schaffer said of Gabany. “He raced me clean and we had a good time.” While Schaffer and Gabany had their own duel going, they left Sadler, Izzo, and Bryce to battle for third. Meanwhile, Murdick, Jerry Schaffer, and Slater were challenging for position.

Just past the halfway mark, Gabany worked his way past Brian Schaffer. However, a caution just a couple of laps later for Regalski put Brian Schaffer next to Gabany for the restart. Shaffer got the advantage coming off turn four and he swooped into the first turn with a lead that he would never relinquish again. Sadler also slipped past Izzo after the green came out again.

While there were no further changes up front, the remaining spots in the top ten were hotly contested in the final laps. Murdick clawed his way to fourth at the finish, with Izzo crossing in fifth. Slater led Brandon Ritchey, Bryce, Jerry Schaffer, and Blaze Myers as the next five finishers.

Brian Schaffer joined several of his family members as track champions at Michaels Mercer Raceway. “It’s been a long time coming here,” he said of his accomplishment. “I was a little worried but I just tried to run my own race.”`

The heat wins belonged to Sadler and Izzo. There was no B Main.

The starting line-up for the Racesaver 305 Sprints presented by Hards Welding and Fabrication and River Valley Butcher Block was shuffled considerably by the failure of the cars to stage on time. As a result, the filed was lined up as the cars appeared on the track for the start of the feature. That unexpected development put Greg Dobrosky on the pole with Steve Cousins to his left. Chase Matheny was relegated to third, while Andy Cavanaugh moved ahead to fourth. Then came Nevan and Shamus O’Donnell. Jacob Gomola fell from fourth to seventh. Adam Nolan and Kyle Colwell completed the field.

Dobrosky and Cousins bolted out to the lead. Matheny, Gomola, and Colwell fell in line behind them. Colwell worked past Gomola, but he needed more cushion that that, as a an early retirement from the heat race left him five points behind in the championship contest. While he was able to pick up one more spot before the checkers fell, so did Gomola.

The non-stop affair had Dobrosky getting the win, followed by Cousins, Colwell, Gomola, and Matheny. Then came Cavanaugh, Nevan O’Donnell, Shamus O’Donnell, and Nolan.

Dobrosky, who also topped the lone qualifier, was happy to score the win, as his car owner, Ed Demme, was in from North Carolina for the race. “It’s been a great,” he said. “I’ve been enjoying the ride while it lasts. You don’t get seasons like this very often. It’s always good to win when everybody’s here.”

Point champion Jacob Gomola was also pleased with his consistency. “I really wasn’t running for points. I’m not very much of a points racer, but I guess we’ll take it if we can get it.” He was relieved to have the week off due to a rain out. “We blew up a motor two weeks ago and I was kinda glad that last week rained out. Actually, Kyle Colwell helped me build this one last week, so we got it together. He probably should not have helped me. But, we help each other out. He’s got my rear end in the car tonight, so it’s all how it works out.”

In the Barris Trucking Modifed Lites, Dave Innes and Roman Jones brought the field to the green flag. Mark Marcucci and Ayden Cipriano were in the second row, with Jacob Eakin and Charlie Biskup in the third. Rod Jones and Jeff Davis were in row four, followed by Shane Webb and Dusty Frantz were in the fifth row. Points leader Vivian Jones started in eleventh.

While Innes took the early advantage, Rod Jones used several cautions in the early going to move ahead in the running order. He was able to take the lead just two laps into the event. His daughter, Vivian, followed in his tire tracks, and by lap four she was searching for a line to get by him. Webb continued along in third, followed by Marcucci and Davis.

At the checkers, Rod topped Vivian in the battle of the Jonses. Webb was third. followed by Davis, and Marcucci. Frantz, Roman Jones, Eakin, Robby Barris, and Cipriano were the next five across the line. Soon after the checkers fell, there was a massive pile-up at the entry to turn one that involved the cars of Jacob Isenhart, Jason Gracey, Ed Mudrick, Nathaniel Bale, and Innes. Innes turned over in the melee, but none of the drivers were hurt.

Race winner Rod Jones was the proud father of the new track champion in the Modified Lite division. Speaking of Vivian’s accomplishment, Rod said “that’s probably the best thing that’s happened. She had a phenomenal year. She kicked our butts most of the year. I couldn’t be happier.” Vivian, who became the first female champion in the history of the speedway, was speechless after getting the word. “It’s pretty surreal. I don’t have any words,” she said. Vivian admitted that she does have higher goals in racing, though. She wants to race the Sprint Cars!

The heat winners were Vivian and Rod Jones, and Frantz. There was no B Main.

Shane Shook shot from Second to first on the opening lap of the Mini Stock finale presented by Ray’s Racing Collectibles and Eperthener’s Auto Wrecking. Johnny Bruce came up to second from row two, along with his dancing partner, Joe Campbell. Dewayne Redinger and Jason Pavlick followed, with pole sitter David Coffin holding down the sixth spot.

Shook had a commanding lead with nine laps completed when he suddenly drove off the track at the turn three exit. That turned the lead over to Bruce, with Campbell in second. “I just couldn’t believe it,” Bruce said of the unexpected turn of events. He and Campbell ran together over the final laps. “I was just concerned about the points tonight,” Campbell said. “I Knew where I was and that was good enough for me.” Campbell was fortunate to make it to the finish though. “The radiator just exploded as I crossed the line. There’s a hole right in front and it is leaking bad.”

Bill Fuchs came alive in the final five laps to get third. Joe Romanko was fourth, with Phil King next. Mike McConnell crossed in sixth, but a penalty was imposed that dropped him out of the top ten. That moved Randy Ealy, Redinger, Mike Porterfield, D.J. McRae, and Justin Bailey up a notch.

Preliminaries belonged to Bruce, Ealy, and Romanko. King won the B Main.

There will be no racing at the speedway over the Labor Day weekend. However, an extra race has been added to the schedule on September 7, featuring the Diehl Ram Big Block Modifeds and the 410 Sprint Cars. Other classes in action that night will be the Turn 4 Toilets Fastrak Limited Modifieds, the Barris Tucking Modifed Lites, and the Ray’s Racing Collectibles and Eperthener’s Auto Wrecking Mini Stocks. Watch the website and other media outlets for further details. Then, on September 8 will be the Fall truck and Tractor Pull.

Barring any other schedule changes, the final racing action will take place during the first weekend in October when the Annual Little Guys Nationals will be presented. Details will be forthcoming for that event as well.