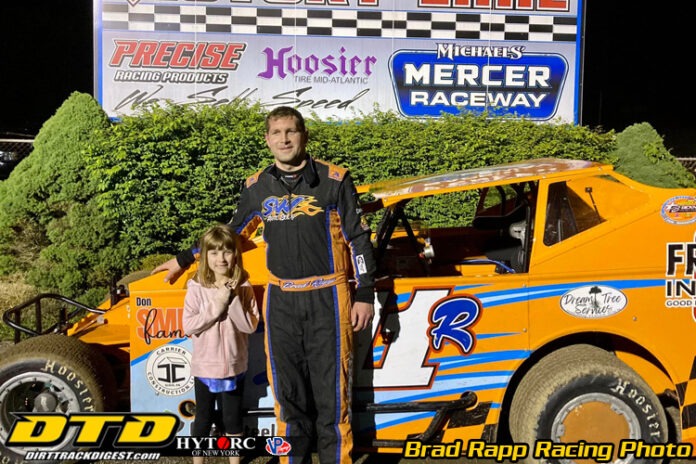 MERCER, PA – As all military personnel were honored of guests of the speedway Michaels Mercer raceway completed its 2nd program of 2022 with 4 time track champ Jack Sodeman Jr picking up his 20th Mercer 410 sprint feature. 2 1st time winners with names that go back in Mercer history with 2nd generation driver Jeff Schaffer Jr winning in the FASTRAK modifeds and 3rd generation driver Roman Jones picked up the Racesaver 305 sprint feature. Brad Rapp won his 4th career big block modified feature and Andy Thompson is now 2 for 2 in the mini stocks .

Jack Sodeman Jr grew up at the tracks watching his hall of fame father Jack Sr visit victory lane many times his his long stories career. Tonight Junior picked up his historic 20th career 410 sprint feature at Mercer. He is now part of a select 10 drivers who have won 20 or more features since 1966 at the bent egg oval. Sodeman would start on the pole of the 25 lap event but it wasn’t easy as third-generation driver Adam Kekich who has won 10 times himself there hounded the leader the entire race. At certain points check Edgewood closing to 2/10 of a second of the leader and other times he would fall back to two full seconds behind the leader. A late race caution would bunch up the field and as they were battling into turn number two on the final lap Kekich bobbled on the inside of the surface getting airborne the landing on all fours and continuing on but lost ground as Bob Felmlee and Cody Bova got around him to finish 2nd and 3rd while Kekich fell to 4th. “I think I had a right rear tire going down and I was getting tighter and tighter and I was trying to keep him (Kekich)away from me. This is the tackiest I have seen this track in a long time.!!!” Bradford Pa’s Jared Zimbardi would finish 5th.

Brad Rapp after picking up three big block modified wins last year picked up his first of the year from the pole in the familiar orange number 11R. It wasn’t easy for him either. the modifieds were racing with a heavy heart with the sudden passing last week of car owner Rick Ryder and the family agreeing to continue racing the cars, and those team cars with Eric Gabany and JR McGinley along with Garrett Krummert would swap positions numerous time and would try to catch Rapp the entire second half of the 25 lap feature event. Rapp had a 3.6 second lead until a last lap caution would bunch up the field restarting single file. Rapp would take off as McGinley would take the low side in turn one but would drift high in turn 3 allowing Rapp to win by .506. “we made some changes but the track stayed a little better than we thought. On that last restart I was worried but the single file deal helped me. These other drivers are really good you just have to drive a clean race and keep the car under you . Tracks a lot better!!!it has good traction and I think it will get better and you’ll see more 2-3 wide racing.” McGinley ended up 2nd, Krummert 3rd, Gabany 4th and Rick Regalski 5th.

3rd generation driver Roman Jones made history as he picked up his career 1st full size car victory in the Racesaver 305 sprint feature and with his sister Vivian winning last year became the 1st ever brother/sister team to win features in the same class in the 71 year history of the track. Veteran driver Greg Dabrowski will start on the pole and was an early candidate to take the feature of victory but he broke on the fourth lap putting Roman Jones into the lead. On the restart Jones would hit the gas and not be challenged for the rest of the non stop 20 lap affair winning by 1.49 over 13 time winner Jimmy Morris. Jones said “I had no idea I was going to be here today I need to thank all my sponsors and my dad for working on the cars and the whole family. I owe this win to my guys they help me with this 305 and I’m just happy to be out there!” When asked who will get their 2nd feature win first Jones said “ I’m gonna have to shoot for me!!!” Opening night winner Jeremy Kornbau wild move up 5 spots to finish 3rd. Jake Gomola 4th and Tommy Jasen 5th.

The Schaffer name goes back in Mercer history for decades in the modifed divisions and tonight Jeff Schaffer Jr put it all together to pick up his 1st career feature in the FASTRAK modifieds. Starting on the outside pole Schaffer Jr. would take the lead and was never seriously challenged although a lot of long time runners were coming up behind him as two time track champion Brian Schaffer moved up eight spots to finish second 1.5 seconds behind. “It feels great to win!! I was just focusing on my own tonight and this one is for the Ryder team.” Garrett Krummert was 3rd, Gage Priester up 4 sports to finish 4th and Pat Lane 5th.

Another nail biter In the mini stock nightcapper as eventual winner Andy Thompson was again battling for the lead lap after lap but this time with newcomer Devin Haley. Thompson would come from his 12th starting position picking off cars lap after lap as Carl and Randy Ealy would challenge Haley but Carl would go pitside halfway through. With 6 laps to go on a restart Haley would lead the field. Thompson would challenge for the lead and with 3 laps to go he would go low under Haley and go side by side down the backstretch. Haley slid a tad bit too high in turn 4 and Thompson went on to win his 2nd of the season by one second over Haley. “ it’s a lot of fun the competition is getting stiff these young kids are tough out there!! I like running 2nd so I can pass the leader at the end. The track is fun and will keep getting better!” Randy Ealy was 3rd, DJ McCrae 4th and Will Aley 5th.

Up next will be the kick off to the second annual Western Pennsylvania Sprince speed week on Wednesday night June 1 featuring the 410 Sprint cars paying $3000 to win along with the open crate modifieds and the mini stocks. racing at 7 PM