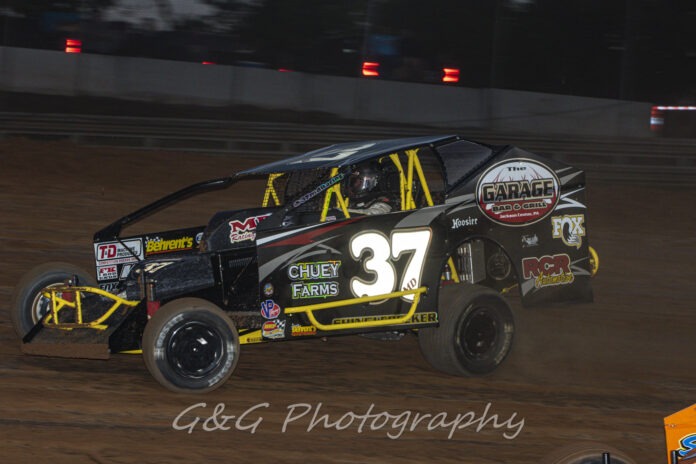 Time trials set the heat races and Garrett Krummert set the track record with a time of 16.203 and took home $100 for setting fast time compliments of Team Green/MRO Outreach Ministries.  The heats were lined up according to times and taking heat race wins were Erick Rudolph, Rex King, Jr. and Chas Wolbert.

Eric Gabany was to start on the pole for the feature, but had problems with his car and was unable to make the call for drivers introduction so he was put to the rear of the field.  This gave Jeremiah Shingledecker the pole with Mike Kinney, the Michaels Mercer Raceway Big Block Modified champion in just his Rookie Year in a Modified the outside pole.  Starting in row two was Rick Regalski and Garrison Krentz.

Krummert set sail and extended his lead by several car lengths over Shingledecker until Krummert suffered a flat tire on lap fourteen bringing out a caution.  Krummert was able to come out at the tail of the field and Shingledecker inherited the lead again.

Several caution periods occurred in the final 35-laps but it never fazed Shingledecker and he cruised to his largest ever paying feature win.  An excited Shingledecker crawled out of the car in victory lane and said, “I need a beer!!! That’s more than double the biggest race we ever won.  I have to thank the Michaels family for putting this on.  Their track is 200% better than it was. When you have Rudolph and Krummert besides you, you can only have so many restarts until they beat you but it’s part of the show. It feels good to get back here and picking up $7000 doesn’t hurt anyone’s feelings.”

This race concludes the 2022 racing season for the BRP Modified Tour Racing Series.  The board will start to work on the 2023 season and updates will be upcoming in the months ahead.

The BRP Modified Tour racing series is a non-profit organization established to give Big Block Modifieds in the Western Pennsylvania/ Eastern Ohio area a chance to compete with one another for a higher purse structure and for a point fund for the scheduled events, started in 1998 by Tim Engles, Lon and Pam Baker and Randy Myers.  The BRP Modified Tour has had great success at bringing regional cars together at various speedways in Western Pennsylvania, Ohio, New York, West Virginia, and Canada.