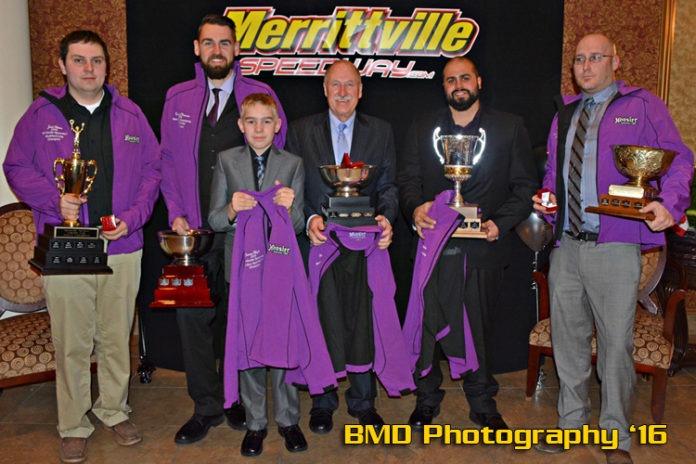 A crowd of 300 drivers, race team members, fans, staff and sponsors gathered at Port Robinson’s Club Castropignano where $40,000 in Cash and other awards were presented.
Former racer Don Spiece of Welland was introduced as the new owner of the Thorold facility that first opened in 1952.

Cody McPherson, also from St. Catharines earned his 4th Title in the Yager Bros Trucking Sportsman Division while for the 6th time in 7 years – Josh Sliter of Ridgeway was honored as Champion in the Rev’s Full Throttle Powersports Modified Lite Division.

Three drivers would be honored with their first career championship – Welland’s Tyler Lafantaisie in the Van Raine Construction 4 Cylinder and Dave Bailey of Hagersville in the Hoosier Stock Divisions respectively.

Merrittville’s Announcer Dana Curvin performed Master of Ceremony duties – presenting the points finishers from each division with point fund monies in addition to a wide variety of special awards.

From a runner-up finish overall in 2015, Bailey would best defending champion Mark Fawcett by 3 points in 2016 to win his first Hoosier Stock Championship earning Archer Truck Services Driver of the Year honours as well.

Bailey would take home 4 Feature Wins in his Jib’s Action Sports/Window Werx/Club 54 Motorsports #49. Bailey’s season also included Championships at Ohsweken and Humberstone Speedways in addition to a runner-up finish in the Duel on the Dirt Mini-Series involving his three home tracks and the Brighton Speedway.

One final accolade would involve Bailey as his Crew Chief – Mike Miller was awarded the Billy Matthews Crew Chief of the Year Award.

Pete Bicknell, who would finish in the runner up spot behind Chad Brachmann in 2015 would be one of 5 drivers who would take home 2 wins in 2016. Consistency has always been key for Bicknell’s now 24 Championships since his first title in 1984.

Ransomville NY’s Ryan Susice was the lone driver in the 358 Modified Division Top 10
without a Feature Win. A strong season would result in the second generation driver earning a third place finish and the 2016 Performer of the Year Award.

For the 4th time in his career, Cody McPherson would take home the Yager Bros Trucking Sportsman Championship. Another second generation driver – his 18 Top 10 Finishes in 18 Starts would include 5 Feature Wins.

Tyler Lafantaisie’s first career Championship in the Van Raine Construction 4 Cylinder Division came from 16 Top 10s in 16 starts with 15 of them in the top 5 totalling 870 points.

The Begolo-Little Award for the most improved driver went to Brent Begolo, 2nd in both the David Chevrolet King of the Crates Mini Series and the overall point standings for the Yager Bros Trucking Sportsman Division.

It seemed fitting that for the first time the Most Improved Driver Award went to a driver not in the 358 Modified Division – the recipient is the grandson of the Award’s cofounder Jeno Begolo.

Rick Bellamy was presented the 3rd Annual Pete Cosco Car Owner of the Year Award.
Bellamy – a racer himself was instrumental in the efforts of fellow drivers Chad Brachmann, Darrell Farraway and John Babion as car owner.

The award initiated by former Cosco Racing Driver Chris Steele and his wife Sami honors the memory of Pete Cosco who passed away late in the 2014 season.

The Gordie Award named after former Merrittville Announcer and Wall of Famer Gordie Wilson goes to a person, or group of people who exhibit dedication to the sport.
The 2016 winner was Speedway Assistant General Manager Jim Irvine who has been involved with the facility for 30 years. Irvine dedicated the award to his dad Bryant – former racer, car owner, sponsor and Speedway Owner who is recuperating after recent surgery.

For a complete listing of the 2016 Points Standings – click on http://www.speednetdirect.com/points.php?track_id=8430&nav_step=results

Merrittville Speedway’s Winter Office is located in Bicknell Racing Products, 117 Cushman Road in St. Catharines and can be reached at 905-685-7223.

Lucas Oil Products is one of the fastest growing additive lines in the consumer automotive industry featuring a premium line of oils, greases and problem-solving additives.
Through innovative product research and development, along with aggressive marketing programs, Lucas Oil Products has established itself as the top selling additive in the industry.