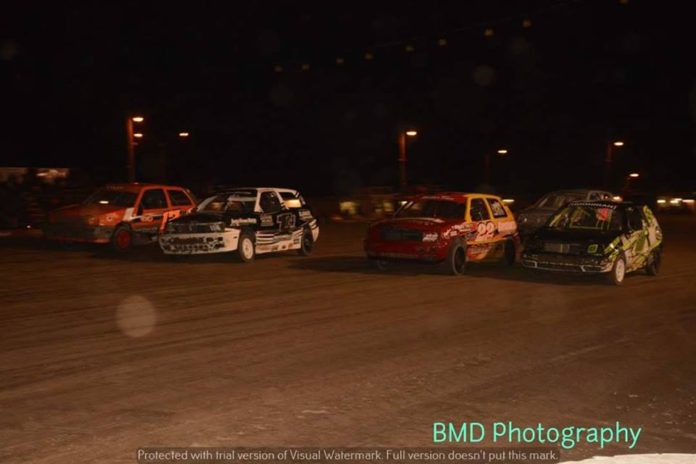 THOROLD, ONT – Leading into Merrittville Speedway’s 65th Anniversary Season in 2016, Pro 4 Truck Racer Kyle Tomaski was instrumental in setting up the three race Eataly Foods Triple Truck Challenge Mini-series. Leading into Don Spiece’s first season as the owner of the Thorold facility, Tomaski is adding to his involvement as sponsor of the long-running Triple Crown Series for the Central Fabricating 4 Cylinder Division in 2017.

“The idea actually came to me at last year’s (Merrittville) Awards Banquet,” said Tomaski, 24 of Welland, “each division and Mini-Series had some great sponsorship support except for the Triple Crown … I knew then that I would take a look at becoming the Title Sponsor.”

Tomaski, who works at ArcelorMittal Dofasco in Hamilton also works at promoting racing in the area – his own Truck and for the sport in general.

“The 4 Cylinder Division looks to be a good economical class to get started racing in,” added Tomaski, “you’ve got to love it when you see them racing 3 and 4 wide.”

That was evident in last year’s Central Fabricating 4 Cylinder Division and especially the Triple Crown Series. Kyle Rothwell edged Tony Kelly by a .045 second margin in the Mini-Series Finale to win the Title by a mere 3 points ahead of Kelly and eventual overall champion Tyler Lafantaisie.


“Every year the 4 Cylinders provide some of the most exciting racing action and last year was no exception,” said new Merrittville Owner Don Spiece, “the Triple Crown and the overall points were so close … there isn’t many race fans that will forget the final lap in the Semenuk’s Esso Championship Night – 4 drivers went 4 wide the final lap until it was decided by inches on the home stretch. I’ve got to thank Kyle for stepping up and supporting the excitement that the 4 Cylinders bring to a Saturday Night.”

“That’s why I took the Triple Truck Challenge Idea to (former Merrittville GM) Erica and with the support of Eataly Foods in Port Colborne … it became a reality.”

Tomaski would like to start the 2017 Eataly Foods Triple Truck Challenge the way he finished the 2016 edition – in Victory Lane.

Danny Wurster opened last season’s Mini-Series with an emotional win in the Brian Stevens Memorial suitably in his tribute Orange #444, Craig Vlasic took Round 2 with Tomaski winning the finale.

An addition to his racing schedule will include visits to other race tracks in Ontario and New York State with a second truck and driver also planned for the new season.

“I’m really looking forward to working alongside Don Spiece and his family as this new adventure begins for them as Merrittville Owners and Thanks for keeping racing alive in Niagara.”

Merrittville Speedway’s Tomaski Racing Triple Crown Series for the Central Fabricating 4 Cylinders is tentatively set to kick off on Saturday May 13th with Round 2 taking place as part of Archer Truck Centre’s Night Saturday June 10th. The 2017 Finale will be a part of Saturday July 29th’s WA Abrasives Night.

To help you with your 4 Cylinder Build – check out Bruce Horlacher’s 5 part series on Race Pro Weekly at http://raceproweekly.com/cms/index.php?option=com_content&view=article&id=10565%3Ahow-to-build-a-4-cylinder-dirt-race-car&catid=3%3Acolumnists&Itemid=4

MERRITTVILLE SPEEDWAY SPONSORS The 2017 66th Anniversary Bobcat of Hamilton Weekly Racing Series for Merrittville Speedway’s 5 Divisions was brought to race fans and racers by division sponsors – Pinty’s Delicious Foods, S&W Service Centre, Hoosier Tire Canada, Wood Motor Company and Central Fabricating in addition to many marketing partners Visit them at http://www.merrittvillespeedway.com/sponsors.htm and visit them when you require their products and/or services.errittvillemedia@gmail.com ***