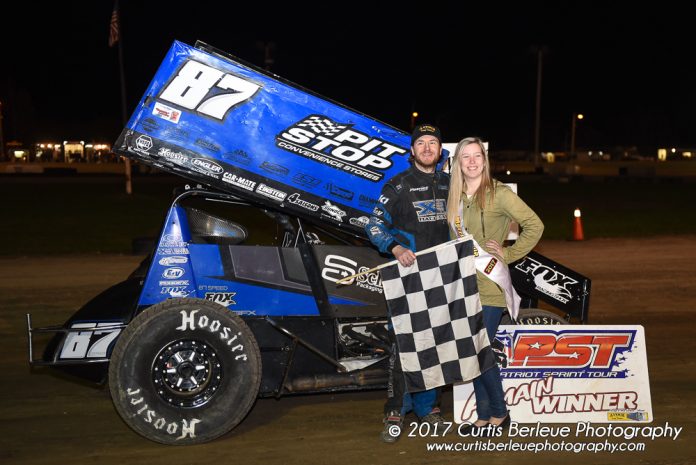 Teenage driver Jake Brown and Matt Tanner would bring the competitive 24 car field to the green flag. Brown would take the lead using the inside lane but a caution caused by a spinning Dylan Westbrook would slow the field.

On the ensuing restart, Tanner this time would get the better run and take the lead from Brown, and Chris Steele who was running third, followed by Ryan Turner, and Glenn Styres. Steele would eventually get by Jake Brown and Cory Turner would follow Steele with the two Canadian driver’s would set their sights on the American leader in Tanner.

Then on lap eight, Steele would take advantage of the lap traffic and get by Tanner to take over the race lead. Meanwhile, Jason Barney began to make some noise as he would crack into the top five, after starting 12th.

Lap 11 would bring out the red flag for Tanner who was running second as he collided with a lap car’s right rear causing him to flip several times into the turn one catch fence. Except for Turner and Steele, every driver would advance one spot which left Jason Barney in spot three.


On the restart, Steele would build an advantage as Turner and Barney would battle for second. Lap 15 would officially score Barney as the runner up and would begin to reel in Steele.

An outside lane developed and Barney would grab the lead on lap 18 where he would hang on from a perseverant Steele. Cory Turner would settle for third followed by Jake Brown, and Bobby Breen.

The next Patriot Sprint Tour Canadian event will be June 9 when the series heads to Ohsweken Speedway, and the following day they will head north to the Brockville-Ontario Speedway on Saturday, June 10. The next American event will be Saturday, May 13, at the Woodhull Raceway.