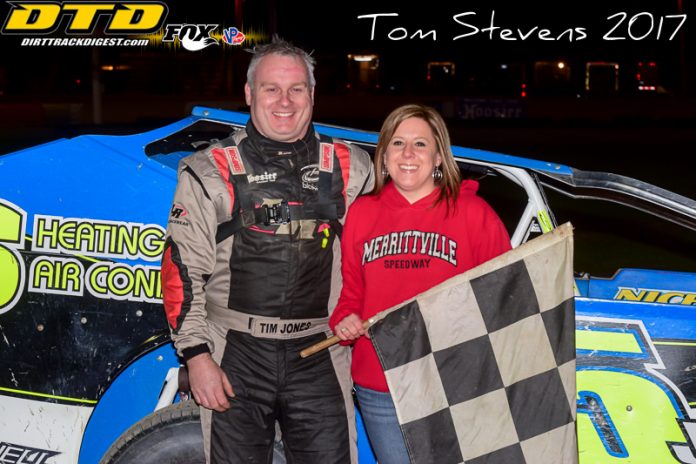 THOROLD, ONT – For the third time in as many seasons, “Racin” Jason Barney from Constantia, NY took the lead late from Chris Steele to pick up the A-Main victory for the Patriot Sprint Tour as part of the 2017 Spring Sizzler presented by Peters Excavating at the Merrittville Speedway on Saturday evening. Tim Jones from Port Robinson Ontario won the main event for the Pinty’s 358 Modifieds while “Mr. Excitement” Paul Gaboury won the feature for the S&W Service Centre Sportsman. Josh Sliter from Ridgeway, Ontario picked up the Canadian Mod Lite Nationals feature for the Wood Motor Company Mod Lites as part of the TUSA Mod Lite Tour.

Matt Tanner led the early laps in the 25 lap A-Main for the Patriot Sprint Tour before Chris Steele taking over the lead on lap six. As Steele would take over the lead, Jason Barney would make his move into the top five and then continue his progress towards the front of the field. The red flag would come out as Matt Tanner would flip in turn one after making contact with a lap car on lap 11. On the restart, Steele would take off over Barney with Cory Turner, Jake Brown and Bobby Breen running in the top five. Barney would catch Steele in turn four and would take over the lead on lap 17. The leaders would hit lap traffic on lap 20 but Barney would be able to hold off Steele and Cory Turner to get the win, his third straight win in the Spring Sizzler event at Merrittville.

Mat Williamson and Ryan Susice led the Pinty’s 358 Modifieds to the green flag for their main event with Williamson jumping into the lead. Tim Jones started sixth on the grid and quickly took over second in the races early stages. Williamson would take off and open up his lead over the field as the battle was on behind him between Tim Jones, Fred Carleton and Tyler Willard. Jones would finally break free of the battle for second and would start to hunt down leader Williamson. When the leaders hit lap traffic, Jones’s car would pick up speed and would catch Williamson and would pass the leader for the lead with four laps remaining exiting turn four on the inside groove. Jones would hold off Williamson to score the win. “We have a very basic set up in the car and it worked well tonight” stated Jones in victory lane.

Paul Gaboury led from the outset in the 25 lap feature for the S&W Service Centre Sportsman with Darrell Farraway running in second. Brad Rouse had issues with his racer after starting on the front and went to the pits on lap one. Off an early race restart, Gaboury would pull away from the field with Brett Senek moving up through the field and taking over second by the races midway point and would start to catch Gaboury. Senek’s best chance to catch the leader took place in the late stages of the event when Senek looked underneath Gaboury in turn three and made contact with the inside guardrail, giving Gaboury a clean shot for the win. Senek would settle for second followed by Adam Leslie, Farraway and Cody McPherson. “The car was hooked uptonight” stated Gaboury in victory lane. “I was in the garage for a month to finish the car, the car is old but we refreshed everything and it worked welltonight” Gaboury added.


Rob Misener led from the opening green flag for the TUSA Canadian Mod Lite Nationals event. Josh Sliter proved to have a fast car throughout the night as he quickly took over third and then took over the lead on lap seven. Moving up through the field was Chris Steele who started deep in the field and would take over the lead on lap 20 as the leaders worked through lap traffic. The lead was short lived as Sliter would regain the lead just three laps later and would pull away and lead the final two circuits to pick up the victory. Mark Marcucci would pass Steele late in the event to finish second. “The car stayed in the garage for seven months since our last race and we didn’t do anything to it” elated Sliter in victory lane. “It feels good to kick off the season with a win that’s for sure” Slider added.

21 Small Block Modifieds, 24 Patriot Sprint Cars, 22 Mod Lites and 32 Sportsman signed in pitside for the Spring Sizzler for a total of 99 cars pitside. The Spring Sizzler would officially mark the first race for new track owners Don and Lorraine Spiece.

Former Racer Darren Peters owner of Peters Excavating was thinking of the racers providing bonues for the top 3 finishers in the 358 Modified, Sportsman and Mod Lite Divisions.

MERRITTVILLE SPEEDWAY SPONSORS The 2017 66th Anniversary Bobcat of Hamilton Weekly Racing Series for Merrittville Speedway’s 5 Divisions was brought to race fans and racers by division sponsors – Pinty’s Delicious Foods, S&W Service Centre, Hoosier Tire Canada, Wood Motor Company and Central Fabricating in addition to many marketing partners Visit them at http://www.merrittvillespeedway.com/sponsors.htm and visit them when you require their products and/or services. Celebrating 15 years of serving the Hamilton, Halton and Niagara Regions, Bobcat of Hamilton is a leading provider of compact equipment for a wide variety of markets – striving to empower customers to do their jobs more efficiently and effectively. To learn more about more about the Bobcat of Hamilton Advantage click on www.bobcatofhamilton.com. Bobcat of Hamilton … One Tough Animal!