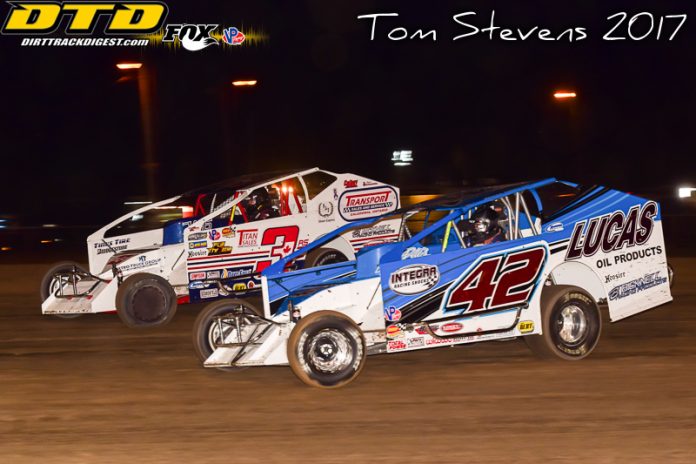 Two other drivers – Cody McPherson of St. Catharines and Dave Bailey of Hagersville: both defending champions in the S&W Service Centre Sportsman and Hoosier Stock Divisions would take home their first wins of the new season.

“It’s taken 7 years to get here,” said Susice after exiting the Randy Slack owned #3RS in Victory Lane at the conclusion of the 35 lap main event, “ it’s not about luck tonight … it’s about the hard work of the Slack Family … the crew and my family…. this one’s for Dalton. Tonight was a great turnaround from last week.”


Ironically in the history of the Slack-owned car that began with Watertown NY Driver Billy Dunn and Chris Steele of St. Catharines last season, both Randy and his son Bob have both missed their driver’s win. Tonight that honour went to the fourth generation racer in the family – Dalton who was home sick.

Peters Excavating Spring Sizzler Winner Tim Jones led the field to the initial green flag with Susice edging ahead down the backstretch the first time.

Former champion Chad Brachmann was able to get by Jones for the runner up spot until a lap 5 caution saw Scott Wood off the pace and Mike Bowman ducking into the Pits with an apparent flat tire.

Susice and Brachmann whose cars are both numbered with threes both had their fastest laps of the night on lap 3 with Susice a fraction of a second quicker. Susice would also be quicker on the restart with some side by side battles for position behind Jones.

Down the frontstretch of lap 8 Brachmann became the new leader. Racing to the halfway point, Brachmann, Susice and Jones were separated by a few cars lengths with Gary Lindberg and Pete Bicknell as the top 5.

Into lap traffic by lap 20, Brachmann and Susice were right on each other’s bumpers pulling away from Jones until Susice regained the lead on lap 24.
Immediately Susice opened up a 5 car lead about 4/10ths of a second faster than Brachmann.

Lap traffic in the closing laps allowed Brachmann to close in slightly with Jones, Lindberg and Bicknell as the top 5 at the checkered flag.

“It was a great race with Josh,” said Brent Begolo of the battle with his car owner and multi-time champion Sliter, “a couple years ago I took one of his cars out for some hot laps … over some wings this past off season we put a deal together and it’s paid off.”

Begolo and Sliter led the field to the start of the 20 lap event before Sliter took control of top spot. Begolo quickly regained top spot until Sliter began to challenge by lap 4. By lap 6, Begolo would open up a couple car length advantage until caution slowed the pace on lap 8.

Begolo regained the lead in the return to racing with Sliter being challenged by Paul Klager until Klager slowed heading to the pit area on lap 10.

Lap 12 the margin was about 5 car lengths for Begolo until caution on lap 13 slowed the field with debris just past the start finish line.

Once again Begolo regained top spot ahead of Sliter with Jeffrey May in third.
Taking the white flag – the final lap saw Begolo come home out front ahead of May who edged Sliter down the homestretch. Chris Watson and Rob Misener rounding out the Top 5.

“I had a little too much gear for the top but once I found the bottom the car was good,” said McPherson in Sportsman Victory Lane after 25 laps of racing, “I wasn’t too happy with how we finished last week- thanks to all the sponsors … the crew and my Dad … I wouldnt be here without all of them.”

Tonawanda and Ransomville NY Drivers Matt Farnham and Brett Senek took the field to green with Senek quickly landing in top spot followed by Brad Rouse and Cody McPherson who raced into second and third. Contact with the leader unfortunately left Rouse sitting the wrong way in Turn 2.

Senek set the pace on the restart with McPherson settling into second ahead of Darrell Farraway. Just past halfway caution would again slow the field with Senek out front once again on the lap 13 restart. A lap 15 incident slowed the pace once more with front runner Farraway retiring to the pits.

Senek again set the pace ahead of McPherson with the the two side by side until another caution on lap 16.

With Senek out front the battle for top spot quickly had Chad Chevalier join in. McPherson would take over the lead on lap 18 with Chevalier following into third spot. Heading into Turn 2 contact between Chevalier and Senek left Chevalier sitting the wrong way in Turn 2 with Adam Leslie making unfortunate contact with the disabled Chevalier car.

McPherson was back in control on the restart with James Friesen and Rouse as the top 3. McPherson held control of the 4 lap dash to the finish with the defending champion opening up quite a lead ahead of Rouse who rebounded nicely from the early race incident. Rob Knapp, James Friesen and Justin Sharp would round out the top 5.

“I worked all week on the transmission … Friday I decided to change it,” said defending Champion Dave Bailey in Victory Lane, “with the guys out there tonight … I think it’s going to be a great year for the division.”

Billy Bleich Jr. jumped out to the early lead of the 20 lap event before fellow front row starter Dave Small taking control in completing lap 1. Down the backstretch of lap 2, the new leader was Bailey with the defending champion’s pace slowed on lap 3 after a multi-car incident between Turns 1 and 2 slowed the field.

Bailey resumed control on the restart driving away to a couple car length lead.
By halfway, Baliey had opened up almost a ¼ lap lead on the field until a lap 11 caution would bring the field back in touch with the leader.

Bailey and Bleich were side by side almost an entire lap on the restart until Bailey again opened up a comfortable lead. The margin would again stretch to almost a straightaway for Bailey with Bleich settling for second ahead of Rob Murray, Kyle Pelrine and Jim Lampman.

“The car was amazing,” said Tony Kelly in Victory Lane, “I’ve got to thank Kyle and Lisa (Rothwell) for all their help since the wreck that finished the season off last year … Kyle put a lot of work into it to get it here.”

At the start of the 15 lap Feature, former Champion Leroy Buscumb out raced Kelly to the initial green flag with Kelly was the new leader to start the second lap. Alex Riley was quick to challenge Buscumb for the runner up spot not knowing that he would be put back two spots for firing too early on the original start.

Riley would close in on the leader by the one third mark with Kelly holding the advantage through lap traffic until being slowed on lap 9 for caution.

Two laps after the restart – a second caution eased the battle between Kelly and Riley who had advanced from the penalty in the former Tyler Lafantaisie Championship car.

Kelly resumed control of top spot on the restart. With one lap to go, Kelly was a few car lengths ahead of Riley … a margin he would carry to the checkered flag.

“Last year … we had a Vintage Modified Body on this car,” said Terry Larmet after taking home the first Novice Sportsman Feature of 2017.

Larmet who has raced in the 4 Cylinder and Hoosier Stock Divisions over the years led the entire 15 lap event with Gregg Rauscher and former Mod Stock Champion Dave Mamo following.

Merrittville Speedway will host it’s first Wednesday Night Practice of the season Wednesday May 3rd. Pit Gates will open at 5:30 with the first cars on the track at 6:30.

May opens with Loop Recycled Paint Night featuring the first Home Track Event for the Hoosier Stocks as part of the Duel on the Dirt Series against teams from the Ohsweken, Brighton and Humberstone Speedways.

When the Great Clips Grandstand Ticket Office opens at 5:30 May 6th – younger race fans will have the third chance to register for the 2017 Kids Club. For just $20, Membership includes many benefits and FREE Admission for Children 12 and under.