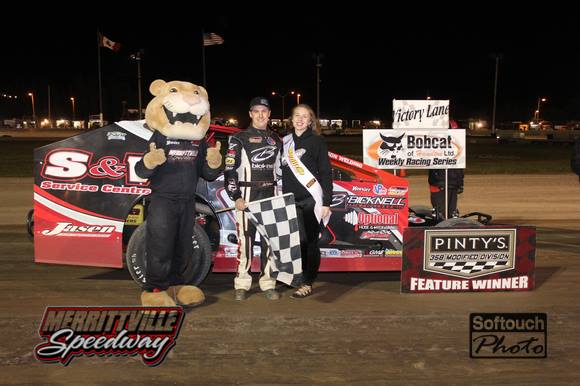 THOROLD, ONTARIO At Niagara’s largest indoor shopping centre you can find your EVERYTHING. At Pen Centre Night at Merrittville Speedway – 6 Drivers found their EVERYTHING in winning their respective Bobcat of Hamilton Weekly Racing Series Events in the Victoria Day Doubleheader Opener Saturday May 20th.

Gregg Rauscher rounded out the Feature Winners in winning the Novice Sportsman Feature.

Phil Vignieri and Greg Panunte led the field to the green flag to start the 35 lap Main Event for the Pinty’s Delicious Foods 358 Modifieds until Scott Wood took control of top spot. Down the backstretch of lap 10, Mike Bowman rocketed into the lead – pulling away to quite an advantage until caution on lap 13 eliminated the gap.


Bowman beat Vignieri to the green flag on the restart. Just as lap 20 was complete Mat Williamson took over second spot until caution would slow the field for an incident just past the Insta-Insulation Lap Counter in Turn 1.

Bowman set the pace with 15 to go with Williamson challenging for the lead side by side.

Williamson got the edge out of Turn 2 on lap 24 and took over top spot with Tim Jones overtaking Pete Bicknell for third by lap 27. The race to watch was for 6th between Todd Gordon, Fred Carleton, Chad Brachmann and others.

With Williamson driving away to a 10 car lead in the final laps, Bowman would hold off a late race challenge from Jones to close out the top 3. Pete Bicknell and Larry Lampman would close out the Top 5.

Adam Leslie was first to lead the 25 lap S&W Service Centre Sportsman Feature and by lap 3 opened up a huge lead ahead of cars running three and four wide behind the Port Colborne Driver.

With just a few laps in the books, Leslie resumed the lead on the restart until Brad Rouse took control out of Turn 4 to start lap 4.

In a few laps Rouse had opened up a wide margin but that would go away after a multi-car incident between Turns 3 and 4 slowed the pace.  Rouse regained the lead on the restart ahead of Leslie and Chad Chevalier who had raced into third.

Behind Rouse, Leslie, Chevalier and fourth place runner Luke Carleton the battle for fifth was quite busy between Begolo, James Friesen, Rob Knapp and Cody McPherson to halfway.

Cars three wide crossing the start finish line at the start of the Hoosier Stock Feature forced officials to try again with front row starter Bill Podwinski the initial leader until caution slowed the field on the first lap.

On the restart the new leader was James Thompson ahead of cars racing three and wide behind him.

Caution on lap 5 could have been a lot worse for Steve Shaw who spun in Turn 4 near the front of the pack with the field missing the stranded car.

Thompsom resumed control of top spot with action for second spot three wide between Kyle Pelrine, Billy Bleich and Dave Bailey. Bleich would lead the charge on the leader pulling side by side down the backstretch of lap 10.

A back and forth battle between Thompson and Bleich soon Bailey join in. Bleich and Bailey would take over the top two spots by lap 15 with Bailey challenging on lap 17. With two to go the two were side by side with brief contact crumpling the right rear quarter panel on the defending champion’s #49.

The top 2 were never slowed with Bailey, Bleich, Thompson, Pelrine and Trevor DeBoer as the Top 5 at the Checkered Flag.

Tyler Winger beat fellow front row starter Marty deMoel to the initial green flag of the Wood Motor Company Modified Lite Feature ahead of RJ Pietz who was in the Josh Sliter #17.

Lap 6 would see Begolo take over second some 10 car lengths behind the leader.

Caution on lap 10 would slow the field with Winger back out front on the restart. Begolo would dive into the lead out of Turn 4 to finish lap 11. Right away Begolo would drive away to a 5 car lead. Caution on lap 15 slowed Winger’s momentum who appeared to be closing in on Begolo.

Begolo jumped back into the lead on the restart with Winger keeping pace until disaster struck when the former karter lost his left front tire between Turns 3 and 4 slowing the race on lap 16.

Begolo was back in control on the restart until a number of cars came together in Turn 1 causing a caution on lap 17. The restart had Begolo out front once again off to a 5 car length lead to the finish.

Dan Strugar was first to  lead the 25 lap Vansickle Pet Valu and Groomingdale’sEnduro Qualifier accelerated by Niagara College before Brent Campbell took control the first time down the backstretch.

The event went red on lap 3 for a fire in the one of cars just as Jeremy Cooper took over the lead. Cooper regained the lead on the restart with Campbell and the Nick Masi following through to the front.

Through slower cars the Masi and Cooper cars were nose to tail before Masi opened up a lead until lap 11 when Greg Murre slowed off Turn 3 with flare up on his car.

Masi set the pace on the restart until a lap 14 mishap sent his car almost around out of Turn 4. The leader would unfortunately loose a number of spots with Jeremy Cooper back as the leader.

Max Chechalk would take over the lead down the backstretch of lap 22 until Cooper battled back.

It was a drag race coming out of turn 4 the final time with Cooper winning by about his car number 3.5 … about 3.5 feet