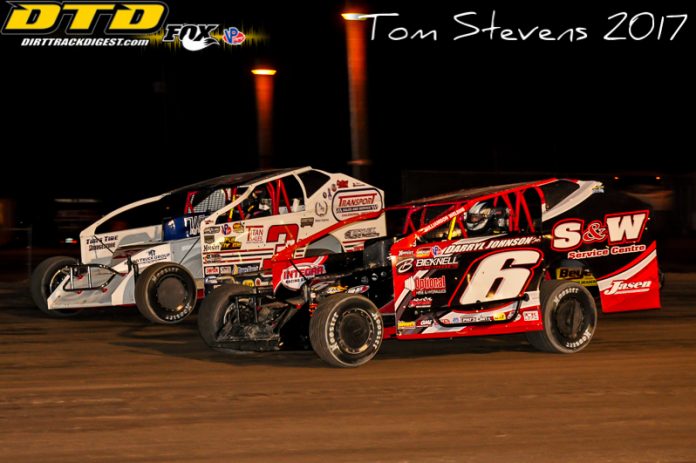 “This car was hooked up again tonight” stated Williamson in victory lane. Williamson ended the two year stranglehold of this event that Erick Rudolph had as Rudolph won the first two editions of the Brian Stevens Memorial. “We beat one heck of a racecar driver tonight” Williamson added. “I’ve never went three for three and it is a huge accomplishment and really cool to do that” Williamson continued.

Tim Jones and Erick Rudolph led the front row for the Brian Stevens Memorial for the Pinty’s 358 Modifieds with Jones leading the way. Ryan Susice and Fred Carleton battled for third while Pete Bicknell and Gary Lindberg battled for fifth. The races first caution came out on lap 10 when Mike Bowman spun in turn one. On the restart, Jones and Rudolph continued their battle for the lead with Ryan Susice and Mat Williamson raced in the top four. Rudolph went to the outside to try to get around Jones for the lead on lap 18, just as Mat Williamson passed Ryan Susice to take over third place. Rudolph, driving his BlueCross BlueShield of WNY, BBL racing number 25, continued his pressure of Jones for the lead and would go once again to the outside and would complete the pass exiting turn four on lap 22 to take over the lead. The leaders would start to hit lap traffic on lap 33, the races halfway mark. Tyler Willard spun in turn four to bring out the caution on lap 37. Rudolph pulled away from Jones on the restart as Susice regained third from Williamson. Jones would catch the rear nerf bar of Rudolph but the third generation driver was able to keep the lead. While Rudolph and Jones were showing the way, Ryan Susice and Mat Williamson continued their heated battle for third place. Williamson would look underneath Susice to take over third on lap 52. Tyler Willard came to a stop on the front straightaway on lap 53 to bring out the races third caution of the event. The lap 53 restart saw Rudolph back to the head of the class over Jones, Williamson, Susice and Gary Lindberg with Chad Brachmann battling for fifth with Lindberg. Greg Panunte spun in turn three to once again slow the field down on lap 58. Rudolph continued to show the way but Jones went to the outside and went side by side for the lead off the restart. Rudolph would clear Jones to keep the lead on lap 60. Mat Williamson would pass Jones for second on lap 62, who quickly reeled in Rudolph. Williamson, glued to the inside line, passed Rudolph for the lead on the last lap and held off Rudolph to score the win.

The Sweeney Chevrolet Buick GMC RUSH Dirt Late Model Touring Series powered by Pace Performance were led to the green flag for their $2,000 to win Victoria Day Championship by defending Series Champion John Waters and Charlie Sandercock with Sandercock jumping into the lead over Waters with Bryce Davis, Jason Knowles and Mike Pegher Jr racing in the top five. Sandercock hit lap traffic on lap eight, just as Bryce Davis passed Waters to take over second place. Mike Pegher Jr worked around Waters to take over third on lap ten. Davis would start to catch race leader Sandercock when the leader was in heavy lap traffic at the races halfway mark. A car that was on the move mid-pack was Russell King, who passed Niagara Region competitor Sam Pennacchio for sixth place on lap 16. Bryce Davis looked underneath Sandercock for the lead on lap 21 but was unable to get around Sandercock as Mike Greene spun in turn four to bring out the caution. Sandercock would pull away from Davis, Pegher Jr, Jason Knowles and King on the lap 21 restart and wouldn’t look back as he went on to score the win. Davis would finish in second and was followed to the line by Pegher Jr, King and Jason Knowles. “It is absolutely awesome getting a win on the RUSH Tour and getting here at Merrittville is so cool” stated Sandercock in victory lane.


Mitch Dumont and Kyle Tomaski brought the field of Eataly Foods Pro 4 Truck Challenge race number one powered by Tomaski Racing with Dumont showing the way. Dylan Llord raced his way into second and caught race leader Dumont but was unable to get around him as Dumont would pick up his first career Pro 4 Truck victory.

Tom Neale and Leroy Buscumb brought the field of Central Fabricating 4 Cylinders the green flag for their 15 lap feature event with Buscumb taking over the lead at the end of lap one. Sam Iftody and Mike Sadusek came together exiting turn four to bring out the first caution of the night on lap one. Off the restart, Buscumb and Jason Coutu battled for the lead with Coutu taking over the lead. Dan McKay and Teeple spun in turn one to bring out the caution for the second time on lap two. Coutu would jump back into the lead off the restart with the field going three and four wide mid-pack for several laps. Alex Riley moved into third and quickly reeled in Buscumb for second. Riley would then look underneath Buscumb for second and would complete the pass on lap 10, with just five laps remaining. Riley proved to have the fastest car on the track as he went underneath Coutu for the lead coming to the white flag. Alex Riley would lead the final circuit to score his first career 4 Cylinder victory. “This was a long time coming” stated Riley in victory lane.

Merrittville Speedway will return to action on Saturday May 27th as CAA Niagara presents the Bobcat of Hamilton Weekly Racing Series featuring round one of the David Chevrolet King of the Crates Series for the Sportsman and Double Features for the Hoosier Stocks and Wood Motor Company Modified Lites. Pit gates open at 5:00pm, grandstands at 5:30pm with Showtime beginning at 7:00pm.

Race Fans and Race Teams are encouraged to bring donations of gently used clothing and household items as it is Fill the Truck Night in support of Goodwill Niagara. 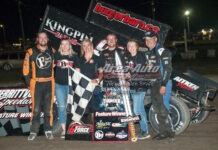