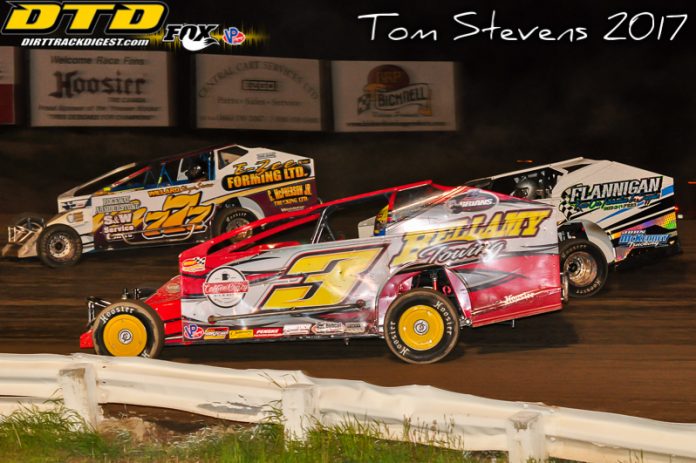 THOROLD, ONT – Race Fans that aren’t CAA Niagara Members and those that are got an idea of just how working Roadside heroes serve members in a caution-filled Night of racing May 27th.

“I had to make some adjustments from the set up we usually run being last and after the Modifieds,” revealed King of the Crates Winner James Friesen, “I must have hit some fluid … I was lucky I was able to regroup.”


The near disastrous incident occurred through Turns 3 and 4 on lap 28 which resulted in Friesen falling off the pace briefly. His night may have been saved until one final caution slowed the pace after several cars came together.

Jay Mallory was the initial leader of the 30 lap special before Dave Flannigan Jr took control the first time down the backstretch.

By lap 5 Friesen was battling Mallory for the runner up spot with Brent Begolo joining the front-runners.

Just as Friesen was challenging Flannigan for the lead caution would slow the pace. After another yellow on lap 10 Friesen and Flannigan were side by side until Friesen took over top spot. Brad Rouse would make a mid-race charge to the front taking over the runner up spot about 10 car lengths behind the leader.

5 Cautions would slow the Insta-Insulation Lap Counter up to lap 25 with McPherson taking on Rouse for 2nd. Once in the runner up spot, McPherson would capitalize on Friesen’s lap 28 miscue taking over top spot.

At the finish, Friesen was followed by McPherson, Rouse, Begolo and Flannigan Jr.

Since May 13th, Bill Podwinski has been waiting to lead the Hoosier Stock Feature to the green flag after Impact Promotions Night was partially rained out.

Quickly the new leader was Steve Shaw who opened up a 5 car lead with Rob Murray following into the runner up spot. By lap 6, Murray was within a car length. The two cars would unfortunately come together slowing the pace.

Dave Bailey was the new leader on the restart with a long green flag run delayed once again after Billy Bleich Jr’s night ended in a cloud of smoke.

Bailey resumed control of top spot and by the halfway point was stretching his lead. With 5 laps to go, Bailey was about a ¼ lap ahead of a race long battle between Derek Van Mil and Kyle Pelrine for the runner up spot.

At the finish, Bailey had a full straightaway lead on Van Mil who was able to hold off Pelrine. Trevor DeBoer and Murray rounded out the top 5.

Later in the evening, it was Podwinski’s son Tanner leading the Hoosier Stocks to the green flag in their regularly scheduled 20 lap Feature.

A multicar incident on the start however had it called off with Vince Fargnoli the leader with James Thompson quickly challenging.

Also quick to challenge was Dave Bailey who started 12th but was able to avoid the first lap incident.

By lap 3, Bailey was in third and joined in quite a race between Fargnoli, Thompson and Jason Fontaine.

Eventually Bailey was able to take over top spot ahead of brothers-in-law Fargnoli and Fontaine. Fontaine’s race would end on lap 10 after slowing with his car smoking. 5 laps later Bailey’s lead was once again a ¼ lap.

With Bailey comfortably out front, Murray who raced his way back to the front after the early skirmish was challenging Fargnoli. At the finish, Bailey was followed by Murray, Fargnoli, former champion Ken Sargent, and DeBoer.

“I went to 6th in the first lap from 12th,” said Bailey in Victory Lane for the second time of the night, “I’m not too sure what happened … but my in car camera should show me.”

Tyler Winger had also waited 2 weeks to lead the Wood Motor Company Modified Lites to green for their Feature from May 13th.

After an early caution, Winger was again in control until falling off the pace and coasting into the infield.

Josh Sliter was the new leader on the restart until a second yellow on lap 8 again slowed the field. With the defending champion out front the race to watch was between Brent Begolo and Steven Beckett for second.

Begolo took control of second at the halfway point but at the finish, Sliter was able to maintain a 10 car advantage on the field.

Sliter and Begolo were followed by team mates RJ Pietz and Rob Misener ahead of Beckett. Beckett crossed the finish line with smoke pouring out of his car.

In the regularly scheduled Modified Lite Feature it was former champion Jeffrey May out front before the race was stopped on lap 2 after Rob Misener barrel rolled his car in Turn 4.
May resumed the lead on the restart but out of Turn 4 to start lap 3 Sliter was back out front.

Down the backstretch of lap 4 Begolo took over the runner up spot but was about a ¼ lap behind his car owner. A caution on lap 12 would narrow the gap and in the final 8 laps – it was quite a race between Sliter and Begolo.

A see saw battle between the two and side by side saw a few lead changes. On the final lap it appeared it would be Begolo but Sliter made one final move stick … the margin of victory just one thousandth of a second.

“The track came in a lot faster than the first feature … I can’t let him (Begolo) win them all can I ?,” said Sliter the second time in Victory Lane, “we both have identical cars … identical set-ups but Brent may have some more bolt on weight.”

Sliter and Begolo were followed by May, Chris Watson and Marty deMoel.

Leroy Buscumb was the early leader in the 15 lap Feature for the Central Fabricating & Welding 4 Cylinders, setting the pace until a lap 8 caution.

While under caution, Archer Truck Centre Driver of the Week Alex Riley developed a flat tire. Riley would have to relinquish his spot in the top 5 but was able to return after a pit stop.

Buscumb would set the pace on the restart ahead of two and three wide battles behind him. On the move was Tony Kelly who took over second on lap 9.

Buscumb and Kelly pulled away from the field in the closing laps but the closest Kelly could get to the leader was about a ½ car length at the finish.

Buscumb and Kelly were followed by Jason Coutu, Olivier Larocque and Tyler Lafantaisie.

Scott Wood set the pace at the start of the 35 lap Main Event for the Pinty’s Delicious Foods 358 Modified Feature with Greg Panunte challenging early. Panunte took control on lap 4 with a caution on lap 7

With Panunte out front, two cautions on lap 10 and the ensuing restart would slow the pace but not Gary Lindberd and Chad

Brachmann now second and third before another caution on lap 12.

Panunte was the leader once again until lap 14 when Brachmann raced into top spot.

By lap 20, Brachmann had pulled away to a ¼ lap lead – a margin that stretched to a full straightaway by lap 25.

“I learned a lot in Monday’s Stevens Memorial … we worked on the car all week,” said Chad Brachmann in Victory Lane, “thanks to the track crew … this is just a great place to race at every week!”

Brachmann was followed by Panunte, Lindberg, Wood and Fred Carleton.

Greg Rauscher led all 10 laps of the Novice Sportsman Feature.

A SPECIAL THANK YOU
Merrittville Speedway would like to extend a THANK YOU to all those who helped ‘FilltheTruck’ by making a donation in support of Goodwill Niagara.

The first Autograph Night is set for Saturday June 3rd as Young McNamara presents a Bobcat of Hamilton Weekly Racing Series event in support of KIDSRACE and the Canadian National Autism Foundation.

During Intermission – Race Fans will get to meet their favorite drivers and see the cars up close as they take over the front stretch after qualifying.