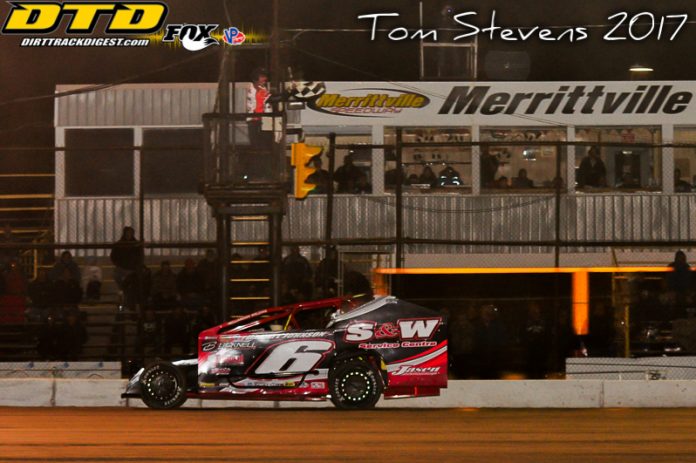 One of the most dominant was Hagersville’s Dave Bailey who remains undefeated after taking home his 4th straight Hoosier Stock Feature. Two drivers collected their third wins of the season – Brent Begolo and Mat Williamson in the Wood Motor Company Modified Lite and Pinty’s Delicious Foods 358 Modifieds.

One of the most surprising verdicts was reached in the Novice Sportsman Division with Brandon Gruhl coming home the winner.

“If someone put up a Bounty … I’d think about going after it,” answered Dave Bailey in Hoosier Stock Victory Lane when questioned by Merrittville co-announcer Travis Cunningham, “but so far my luck has been at the misfortune of others … tonight Billy (Bleich) was gone and Rob (Murray) had a strong run go bad too.”

With Tanner Podwinski taking the 20 lap Hoosier Stock Feature to the green flag – a three wide battle for the runner up spot found Steve Shaw in control of top spot on lap 3.

Murray would retire to the pits at the halfway point on lap 10.

Bleich two laps later but not before caution as Bleich coasted to a stop on the racing surface.

DeBoer set the pace on the restart with Bailey taking over the lead on lap 13.

Bailey was able to drive away from spectacular racing that at one point had DeBoer, Vince Fargnoli, Shaw and Kyle Pelrine racing four wide for the runner up spot.

Second place was Fargnoli’s with 4 laps to go – about 10 car lengths behind the leader. With Bailey on cruise control – Fargnoli would have to settle for second with DeBoer third. Shaw and Pelrine would round out the top 5.

“I’m having a blast driving this JSR Car,” said Brent Begolo after winning his third Mod Lite Feature of 2017, “I appreciate the Speedway working with me letting me do this … hopefully it will help the class out.”

Begolo – a third generation driver and veteran Sportsman Competitor runs both divisions and has shown his versatility as a driver competing in both cars.

Begolo – who took the lead on lap 7, quickly survived a couple of restarts just before the half way mark. Once the field settled into position, Begolo was able to drive away to a lead of almost a half lap.

Tyler Winger was first to lead the event with 3 and 4 wide racing back in the pack finding Steven Beckett landing in second. Back on track after rolling his car last week, Rob Misener in the borrowed RJ Pietz 26 was the new leader just before a lap 5 caution.

With Misener in the Pietz 26, Pietz started the night in Josh Sliter’s 17 until during qualifying when he would flip his car owner’s car between turns 3 and 4.

Misener would resume control on the restart with Winger battling back ahead of a great save the next lap after getting his car out of shape on lap 6.

At the finish Begolo was followed by Misener, Winger, Chris Watson and Jeff May.

“We won the two races but last week weren’t good with the same set up,” revealed Mat Williamson after winning his third Pinty’s 358 Modified Feature, “we tried something new and think we hit the nail on the head.”

From an 11th starting position, Williamson was in the runner up spot by lap 7. After a lap 10 caution for two drivers who all fell victim to flat tires – Jim Zimmerman and Tim Jones, Tyler Willard regained the lead until losing it to Williamson on lap 11.

Willard, a new Dad to daughter Logan two days ago was the initial leader at the start but not without quite a race with Scott Wood. The two would swap the lead a couple times in the early going.

Once out front, Williamson opened up a lead of about a quarter lap by lap 15 and 10 laps later had stretched his advantage to about half a lap.

The race to watch was for second with Willard holding the position ahead of Pete Bicknell, Ryan Susice and Gary Lindberg.

Nearing lap 20 it became a three wide battle with Susice challenging Willard on the outsde and Lindberg on the inside. Lindberg would take second to start lap 22 with Susice in third.

In the closing laps with Williamson leading Lindberg, Susice was being challenged by Chad Brachmann.

With the margin of victory 5.1 seconds for Williamson ahead of Lindberg, Susice was able to hold off Brachmann with Bicknell rounding out the top 5.

“That was very intense for sure,” said Alex Riley after his second 4 Cylinder Feature Win, “I was so close to getting involved in the big one!”

The Big One occurred in Turn 4 of lap 8 after a number of cars came together resulting in Brandon Iudicianni rolling his car. Also involved – The Archer Truck Centre Driver of the Week after his win May 27th Leroy Buscumb, Clinton Nicholls and others.

Trevor Want and Vincent Pagnotta led the field to the green flag with Pagnotta quick to take top spot.

Lots of traffic jams behind the front runners with Tom Neale challenging for top spot by lap 4. The two former karters Pagnotta and Nealer were side by side for a number of laps which allowed Tony Kelly to close in on the front runners – a charge that was derailed with the red flag.

Pagnotta beat Jason Coutu to the green flag with the battle for top spot quickly becoming 4 wide. Jay Moulton would become the new leader until Alex Riley landed in top spot on lap 11.

Taking the white flag Kelly tried to overtake Moulton but at the finish it was Riley, Moulton, Kelly, Olivier Larocque and Coutu as the top 5.

“I could run the top and the bottom,: revealed Brad Rouse in Sportsman Victory Lane for the second time, “my guys made some great choices on shocks and springs … anyone could have drove this thing tonight!”

Rouse would take the lead from Charlie Lynch out of Turn 4 to start lap 14. Lynch, Jay Mallory and Chris Storm all had taken turns as leaders swapping P1 several times.

Once out front, Lynch opened up a 10 car advantage on Mallory. After taking third spot, Rouse would get by Mallory on lap 12 before taking top spot two laps later.

A lap 19 caution would slow Rouse who quickly pulled away to a 10 car lead after the restart.

At the finish, Rouse was followed by Mallory who made a late race move to take second as did Brent Begolo to come home third.
Lynch settled for 4th with Cody McPherson closing out the top 5.

“Thanks to my Dad … if it wasn’t for him I would still be in the stands,” said “Brandon Gruhl after winning the 10 lap Novice Sportsman Feature, “Mom too … and everyone else that helped me get here!”

Gruhl, the second generation 18 year old racer had probably assumed he would finish second until race leader Scot Sonnenburg who had up to a straightaway lead spun his car in Turn 2 the final time.

The infield flags were at half-staff in memory of Quebec Sportsman Racer Guy Ouellette who passed away after a racing accident last Saturday at Autodromme Drummond and for long-time fan Guilio Lostracco who passed away suddenly Saturday June 3rd.

KIDSRACE Night Merrittville Speedway would like to thank all those that supported the annual KIDSRACE Night in support of the Canadian National Autism Foundation.

UPCOMING at Merrittville Speedway Merrittville will host a Wednesday Night Practice June 7th. The Pits will open at 5:30 with the first cars on the track at 6:30.