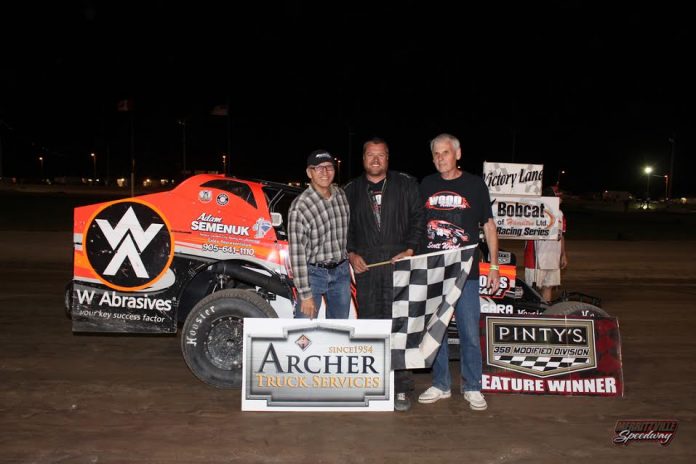 “”I could drive it in hard and it would hold the bottom lne,” said Alex Riley after winning the second round of the Tomaski Racing Triple Crown Series for the Central Fabricating 4 Cylinders, “the car was awesome … without that last caution I don’t think I would’ve caught Tony (Kelly) though.”

Kelly, of Niagara Falls who won the Triple Crown Series Opener in a rain shortened Night May 13th had opened up more than a ¼ lap lead on the field until a lap 15 caution slowed his pace.

At the drop of the green flag in the 20 lap event it was Kelly who beat fellow front row starter Cole Hardy to top spot. Kelly quickly distanced himself from some thrilling action behind him.

By lap 10, Moulton took sole possession of second until Hardy would unfortunately drop from 4th spot after losing control of his car in Turn 2 to slow the event for the only time on lap 15.

Kelly would resume control on the restart with Moulton running side by side with the leader. Behind them the second row had it’s own battle between Olivier Larocque and Riley. Lap 16, they were three wide for top spot with Riley pulling alongside Kelly.

Exiting Turn 4 to start lap 19, Riley would make his move landing in top spot. At the finish, Riley was followed by Kelly, Moulton, Larocque and Billy Sauder.

“I’ve been working with my shocks … I made a lot of changes last week and some more this week,” said Jay Mallory after winning his first Sportsman Feature of the season, “I just had to be careful in lap traffic … hit my marks and not get caught up in anything.”

For the second generation driver that could not have been truer as Mallory would take over top spot from early leader Tom Richau on lap 9.

Richau and fellow front row starter Robbie Johnstone – both second year drivers would not see some incredible action behind them involving a number of veteran drivers. By lap 7 Mallory was in the runner up spot before taking the lead on lap 9.

Out front, Mallory had quite a battle for a top 5 spot develop with Richau, James Friesen, Brent Begolo, Rob Knapp, Dave Flannigan Jr. and Brad Rouse all bunched up.

About 10 laps later, Mallory would come up on slower cars about a ¼ lap lead on James Friesen.
Friesen who won his first Feature May 27th would use lap traffic to his advantage to close in on Mallory and going side by side with the leader. Mallory who last won about a year ago was able to hold off the challenge with Friesen settling for second.

Begolo, Rouse and Flannigan would close out the top 5.

“I tried some stuff that used to work,” said Scott Wood in Victory Lane for the first time in some two years after taking full advantage of Wednesday Night’s practice, “I’m hoping the changes will continue to work. It’s been a whole team effort getting here … thanks to my crew … my sponsors and my family!”

With Todd Gordon first to lead the 35 lap Feature – the race for second went three wide quickly between Fred Carleton, Pete Bicknell and Wood. Almost as quick was the first caution on lap
two.

Gordon would set the pace on the restart until Wood took control on lap 3.

By lap 10, Wood, Carleton and Ryan Susice were the top 3 – about 10 car lengths ahead of the field. Carleton was looking to score a win in his Niagara IceDogs #96 as Riley had done earlier but he would fall off the pace on lap 15.

Wood would resume control on the restart with his 38 joined by Ryan Susice’s 38. By lap 20, Wood had opened up an advantage of about a quarter lap on Susice and Chad Brachmann,

Making the most of track time in Wednesday’s practice also may have been Spring Sizzler Winner Tim Jones. A late race charge found the Port Robinson Driver in second spot on lap 24.

With Wood comfortably out front – could Jones make up the difference?

At the finish, Jones could only get to within a couple car lengths with Brachmann third. Susice and Larry Lampman Jr. rounded out the top 5.

“It’s my first win here … but my second of the weekend,” said Caledonia’s Ryan Dinning, 24 hours after breaking Dave Bailey’s unbeaten streak Friday Nights at Ohsweken and backing it up Saturday Night, “I’m going to try for the sweep Sunday Night.”

Bailey, who had won the first 5 features of the season came out on top of a three wide battle for the lead over Billy Bleich Jr. and Dinning shortly after a lap 5 restart.

Bleich barely survived an early incident that left Rob Murray on top of polesitter Derek Van Mil in Turn 4. Bleich’s passenger door was caved in but wasn’t slowed by the incident and Murray was able to rejoin the field.

Just past the halfway point Dinning took control of top spot with Murray racing back to third spot. Dinning had opened up a 5 car length advantage by lap 15 as Murray took over the runner up spot.

With 4 laps to go, Dinning was into lap traffic which may have played to his favor as the top 5 was shuffled in the closing laps.
Dave Small, Bailey, Bleich and Lampman would finish out the top 5.

“We really seem to struggle here at our home track,” said 2014 Champion Jeff May after his first Mod Lite Win of the season, “we’ve been struggling … but tonight the race came to us.”

For many of the Wood Motor Company Modified Lites – the night was a struggle as the 14 car starting field was down to 6 cars by lap 4.

Tyler Winger was the new leader on the restart until May took over top spot.

The race was red flagged on lap 4 after contact between Craig Martin and Randy Giroux sent Giroux into the front stretch wall just past the start finish line.

With May and RJ Pietz comfortably out front in first and second – the race to watch was for third between Chris Watson and Winger.

With 5 laps to go, May had opened up a ¼ lap lead on Watson until one final caution.

May would set the pace to the finish with Winger overtaking Watson. Pietz and Tucker Wood would round out the top 5.

With two laps to go, Brian Schmidt in the Charlie Lynch #19 would close in on the leader – coming to within a car length of top spot at the finish. Rauscher and Schmidt were followed by Brandon Gruhl and Scot Sonnenberg.

Merrittville Speedway would like to thank all the fans that brought their dogs to the races and to Vansickle Pet Valu and Groomingdale’s for all they do for the sport.

Celebrate Father’s Day Weekend with an event not to be missed Saturday June 17th as Ontario Truck Driving School presents Double Feature Night for the 358 Modifieds and Sportsman Divisions.

Race Fans are encouraged to wear their Retro Race T Shirts – whether it’s a Driver, Race Track or Special Event T Shirt from back in the day.