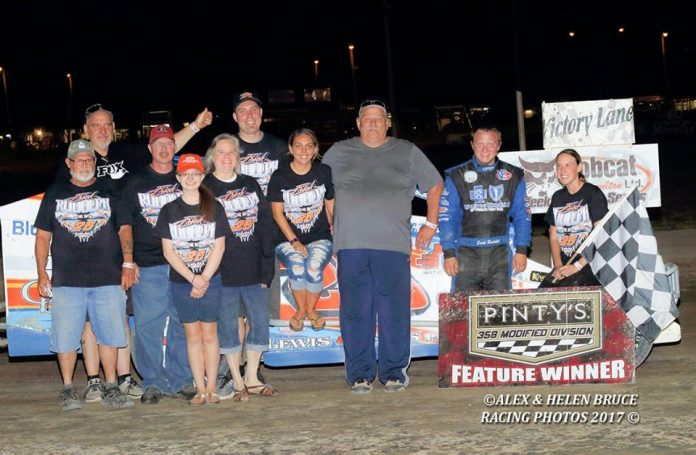 THOROLD, ONT – May 13th’s Rained out Impact Promotions Night finally finished and for two drivers – it was well worth the wait til Saturday June 17th’.

With a slogan of Your Career Starts Here, for some on Ontario Truck Driving School Night – the saying Your Season Starts Here couldn’t be any truer.

Greg Panunte of Port Colborne and Chris Storm of St. Catharines took home the rain-delayed Features – both drivers making their first visits to Victory Lane in 2017. The lineup of first time winners continued right through the night almost through each Bobcat of Hamilton Weekly Racing Series Division.

The rain delayed features were so early in the evening that co-announcer Travis Cunningham hadn’t had a chance to make a Birthday Announcement from his wife Ticia and kids but instead read it to Greg Panunte in Victory Lane after the 35 lap Pinty’s Delicious Foods Modified Feature.

“I haven’t won a Modified Feature since the 90’s,” said Panunte who was celebrating his 45th Birthday June 17th and retuning to the division as team-mate to Larry Lampman Jr in Andrew Sittler-owned race cars, “this one’s for my Dad … Happy Father’s Day to him and it’s for Andrew’s Dad Harry who we lost back in March … it’s great to have the 37 back in Victory Lane!”

Scott Wood who was named the Archer Truck Centres Driver of the Week after winning his first Feature of the season last week was first to lead but with just one lap complete – Panunte was the new leader.

The field was slowed for the only time on lap 15 with Panunte back on top. Just past the half-way point he’d began to pull away from quite a battle between front runners Wood, Mike Bowman, Tyler Willard and others.

Wood regained second spot on lap 28 almost a ¼ lap behind Panunte but couldn’t get much closer at the finish.
Panunte and Wood were followed by Bowman, Erick Rudolph and Willard.

“I’m super excited to finally be here,” said Chris Storrn after parking his uncharacteristic plain looking car in Victory Lane for the first time in his career, “We’ve had some trouble with the graphics … I’ve still got a duct tape number but there are some people on it I’ve got to thank – especially St. Amand Auto & Truck Repair and Bob St. Amand.”

Adam Leslie was first to lead the 25 lap Sportsman Feature with Storm taking control the first time down the backstretch. Almost as soon as Storm took control, the race was slowed after Jay Mallory slowed with a flat tire.

Storm would have to weather a few more restarts in the early stages but before a lap 9 caution after initial leader Leslie slowed had a 5 car lead.

By halfway, Storm had some veterans closing in – James Friesen, Cody McPherson and Brent Begolo. Down the front stretch of lap 17, McPherson was now in the runner up spot with Begolo quickly taking third spot.

With 5 laps to go, Storm was a couple car lengths ahead of the field with McPherson and Begolo closing in the final laps.

At the finish, Storm, McPherson and Begolo were followed by Mallory who had a strong run to the front after the early race flat tire and Friesen.

“The high groove was the only way tonight,” said Jim Lampman after his first Hoosier Stock win of the season that he dedicated to his uncle Alex who passed away Friday Evening, “his friendship, guidance and support kept me going in the early years. He was the one that wanted us to paint the car orange … and we have kept it that colour ever since in his honour!”

Tanner Podwinski set the pace at the start of the 20 lap Event with Billy Bleich Jr. and Lampman quick to challenge for top spot. Before one lap was complete, caution would slow the field with Bleich in control on the restart.

Lampman would become the new leader the next time down the back stretch but was quickly slowed once again on lap 4.

Racing to the half-way point, defending champion and multi-time 2017 Winner Dave Bailey would land in the runner up spot with Rob Murray in third. The top 3 had pulled away from the rest of the field.

With 5 laps to go, Lampman began to pull away and by the checkered flag was some 5 car lengths ahead of Bailey. Murray, Bleich and James Thompson would close out the top 5.

“The car was great,” said a relieved Kyle Rothwell after his start to the season finally found him in 4 Cylinder Victory Lane, “It’s a new motor … a new everything. Thanks to everyone that has helped me get this thing fixed!”

Trevor Want was first to lead the 15 lap Feature until slowed on lap 2. The restart had Cole Hardy and Rothwell racing back to the green flag with Rothwell quickly taking over top spot.

Caution free for the remainder of the race, Rothwell who took his first win of the season last Sunday at Humberstone Speedway drove away to a lead of almost half a straightaway.

Alex Riley made a late race charge to take second spot as did Jay Moulton for third. Hardy and Tony Kelly closed out the top 5.

“Steven (Becket) had that race before the caution,” said Chris Watson after winning his first Wood Motor Company Modified Lite Feature of the season, “what a race to the finish between hm, Jeff May and me!”

A caution on lap 9 would slow initial leader Steven Beckett in the 15 lap Feature for the Wood Motor Company Modified Lites – taking away his huge lead on the field.

Beckett would have top spot on the restart until quite a battle between Beckett and Watson would develop with each driver swapping the lead several times.

Watson would eventually retain top spot with Beckett challenging ahead of Jeff May and Brent Begolo who were closing in on the frontrunners. Lap 13 was almost unlucky for Watson who got a little high in Turn 2 but he was able to get his momentum back.

Taking the white flag, Watson, May and Beckett were three wide for the lead with the finishing order not changing at the checkered flag. Begolo and Tyler Winger would round out the top 5.

“Late in the race … the car came alive,” said Pinty’s 358 Modified Feature Winner Erick Rudolph, “ it took me a little while to find what the car wanted – but when I found it was perfect.”

That time for Rudolph was on lap 24 just after a lap 23 restart when he took the lead from Ryan Susice.

Susice began to close in on initial leader Fred Carleton as the halfway point neared Carleton was running strong from the drop of the green – opening up a lead of some 10 cars before being caught by Susice.

Susice would take the lead on lap 17 only to be slowed on lap 22 when Carleton and Larry Lampman Jr came together. By lap 26,
Gary Lindberg was now in the runner up spot. With three laps to go Rudolph had opened up a 10 car advantage that he would hold to the checkered flag.

Rudolph and Lindberg were followed by Mat Williamson, Mike Bowman and Susice.

“The car was real loose at the start,” said Cody McPherson in Victory Lane for the second time of the season, “Iater I was catching up … but I didn’t think I had anything for Justin (Sharp) until the caution.”

Robbie Johnstone was the initial leader of the regularly scheduled 25 lap Feature for the S&W Sportsman Division until Justin Sharp became the new leader on lap 2.

By lap 10, Sharp had opened up a lead of almost a full straightaway over Johnstone who was holding off Luke Carleton for the runner up spot. Just as Carleton took over second, Sharp was coming up on lap traffic.

By lap 15, Carleton had closed in on the leader with the margin 3 car lengths by lap 20.

The race’s first caution would slow the field on lap 21.

Sharp resumed the lead on the restart with McPherson taking second before taking the lead out of Turn 4 to start lap 23.

At the finish, McPherson was followed by Carleton and Brad Rouse. Sharp and Brent Begolo closed out the Top 5.

Scot Sonnenberg would lead the 10 lap Novice Sportsman Feature to the green flag before Brandon Gruhl took control on lap 2.

One caution would slow the pace on lap 6 with Gruhl back out front on the restart. In the 4 laps to the finish, Gruhl would run away to almost a full straightaway lead over