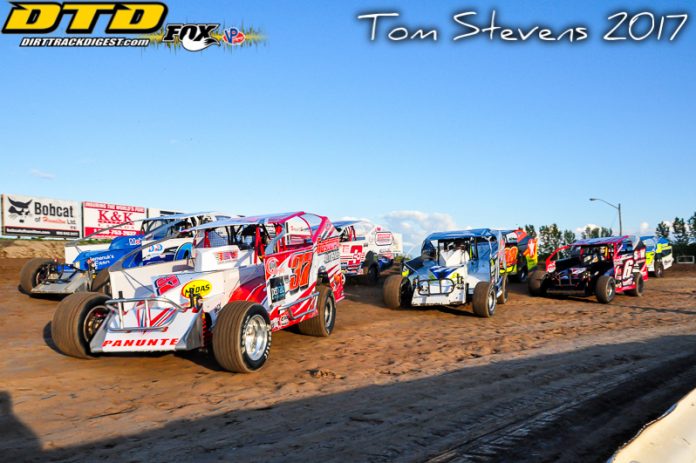 Cole Hardy of Welland and Rob Goulding would also pick up their first wins – Hardy in the Central Fabricating and Welding 4 Cylinder Division with Goulding’s in the second Vansickle Pet Valu & Groomingdale’s Enduro Qualifer accelerated by Niagara College.

“Finally … I always wanted to win with the Empire Super Sprints … it’s been a goal for awhile,” said Westbrook in Victory Lane, adding “ESS has so many good teams and a win against them is pretty cool.

Matt Billings was first to the 25 lap A Main for the Lucas Oil Empire Super Sprints until the 24 car starting field was slowed for caution on lap 5. With Billings back out front on the restart the battle for top spot quickly became a three driver race between Billings, Westbrook and Shawn Donath.

On lap 10, Westbrook would take over top spot and by lap 13 was into lap traffic.

By lap 19 Pinty’s Delicious Foods 358 Modified Driver Ryan Susice was into second spot. In the closing laps, Susice could only make up some of the almost a half lap lead the leader had opened up.

Westbrook’s first ESS Win was his second Merrittville Speedway Sprint Car Win as the Ohsweken Speedway Point Leader helped close out the 2016 Season with a visit to Victory Lane.

Westbrook and Susice were followed by Jason Barney, Donath and Billings.

“We made some changes after the win last week … but the second feature maybe we should have left it alone,” said Greg Panunte after taking his second Pinty’s 358 Modified Feature win almost in a row.

Panunte whose grandfather Rudy worked at Avondale for more than 30 years led the field to the green flag for the 35 lap event and by lap 10 had opened up a lead of almost a half lap.

A caution on lap 12 would slow the pace with Panunte back out front when action resumed. From second spot, Mark D’Ilario tried to reel in the leader but quickly Panunte was again able to stretch his lead.

Mike Bowman would make a late race charge to the front – eventually taking over third spot. Bowman would take over second while crossing the start finish line taking the white flag.

One lap wasn’t enough however as Panunte would take his second win in the Andrew Sittler owned 37s.

Panunte and Bowman were followed by D’Iario, Chad Brachmann and Larry Lampman Jr.

“The whole family is off camping this weekend … I’ve only got my friend Bob with me,” said 6 time 2017 Winner Dave Bailey who wouldn’t give a definite answer to whether he would start dead last next week by Merrittville co-announcer Nathan Christensen, “Sure I would … but I’ll have to get back to you on that.”

In three laps, Bailey had raced from his 11th starting spot to third before a lap 4 caution slowed his pace.

Bailey would take the lead in turn 2 of lap 9 with Murray battling back to retake the lead. Bailey would once again land in top spot on lap 12. Four laps later Murray would retire to the pits.

A lap 19 caution set up a one lap dash to the checkered flag with Bailey holding a car length lead over Ryan Dinning.

Ken Sargent, Thompson and the Archer Truck Centres Driver of the Week Jim Lampman rounded out the top 5.

“I can’t thank guys like Rob Goulding, Leroy Buscumb, Tony Kelly, Jay Moulton and others for all they have done for me,” said first time 4 Cylinder Feature Winner Cole Hardy.

Vincent Pagnotta was first to lead the 15 lap Feature before Hardy took control on lap .

With Hardy and Pagnotta out front the action behind the leaders was two, three and four wide. A caution on lap 7 would stall the excitement after Sam Iftody slowed off the pace.

With Hardy back out front the battle for third spot quickly went three wide between Olivier Larocque, Tyler Lafantaisie in the Kyle Rothwell 114 and Alex Riley.

At the finish, Hardy was followed by Tony Kelly who made a late race charge to sneak into the runner up spot. Laroque, Riley and Lanfantaisie closed out the top 5.

“This thing looks like a chip bag,” said Vansickle Pet Valu & Groomingdale’s Enduro Qualifier by Niagara College #2 Winner Rob Goulding, “ it’s been driven over … it’s been driven through – but it still keeps ticking!”

37 cars would start the 25 lap event with Nick Masi first to lead.

Quickly Goulding would take over top spot with the two exchanging P1 several times through slower cars and restarts after red flags.

After a lap 20 restart, Goulding would keep top spot through to the finish and will now start Sunday August 27th’s Seaway Mall 100 lap Event from second.

It will be quite a party when the Grandstands Open at the special time of 3 PM with Bouncy Castles for the Kids and a Vendor Midway set up. Fans can check out the Pit Area on the new Fan Tram from 5:30 to 6:30.
I
t’s also Merrittville’s famous $1 Hot Dog Night with FIREWORKS too!

The Canada 150 Celebration would not be complete without the Tragically Hip Tribute Band ‘Shoot from the Hip’ who will perform in the Honker’s Bar area behind the Turn 1 Grandstands.

Both the Grandstand and Pit Gates will open at 3 and Show Time is 7 PM.

For the complete run down on Contingency Award Winners and Qualifying click on http://www.empiresupersprints.com/2017Tour/Results/Merrittville0624.html