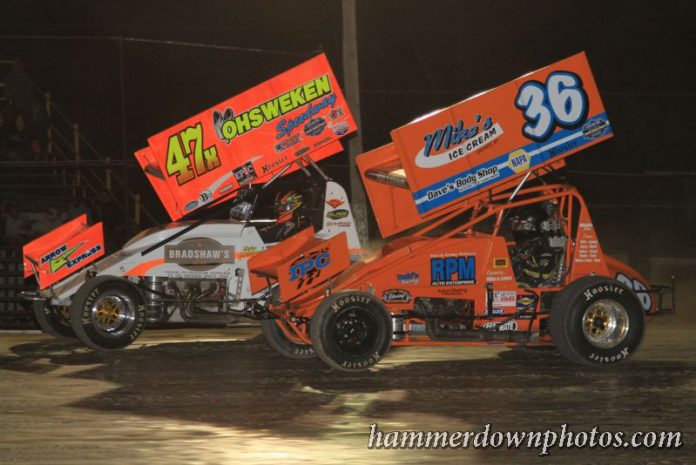 THOROLD, ONT – Scotland, Ontario’s Dylan Westbrook has been regarded as one of the rising young talents in 360 sprint car racing. Running out of the Glenn Styres stable, Westbrook took the lead from Matt Billings on lap 10 to score his first ever Lucas Oil Empire Super Sprint victory.

The 1000 Isalnds RV Centre Canadian event was even sweeter with his victory coming at the Merrittville Speedway in front of many friends. The win was worth $2,075 and you can be sure that there will be more to come.

“Finally!, I always wanted to win with ESS, that has been a goal for a while,” said Westbrook in victory lane. “ESS has always been the premiere club and they have so many good teams and a when against them is pretty cool.”

Westbrook once he took the lead he swept passed lapped traffic with little issue. “The car was real good, I could be fast up top but also move anywhere to get he lapped cars. It’s a pretty cool night.” Westbrook added.

Ryan Susice dusted off Jerrid Morphy’s sprint car for a rare start and he came from his eighth place starting position to take second in the late stages and was actually closing in on the leader. “We had a real fast car all night, the track was awesome and you could run anywhere you wanted,” Susice went on. “I could see Dylan but we just ran out of laps. But, hey it was a real good race for the team. I just wish the nights I have the sprint I can do good in the modified too!”

Current ESS point leader Jason Barney had the misfortune of re-drawing 12th for the A-Main, but the Brewerton, NY star loves the Merrittville 1/3rd mile oval. With the help of just one yellow flag, Barney picked off cars methodically to get a podium finish at the end.

“We won from 12th here before but we just needed one more caution I think,” Barney said who collected the hard charger bonus, “I had a good car and the track was good. But, you have to hand it to Dylan, he’s a great young talent and he deserves this win. Congrats to him.”

Shawn Donath started in second and stayed in the top three just about the entire distance until Barney slipped by late. He brought home the Panther Frameworx #53 home for fourth with Billings hanging on for a top five finish after starting on the pole. Rounding out the top ten were Coleman Gulick, Cory Turner, Jim Huppunen, dash winner Paul Kinney and Paulie Colagiovanni.

A nice field of 29 sprints filled the pits with only one caution all night slowed the pace on the racy surface.