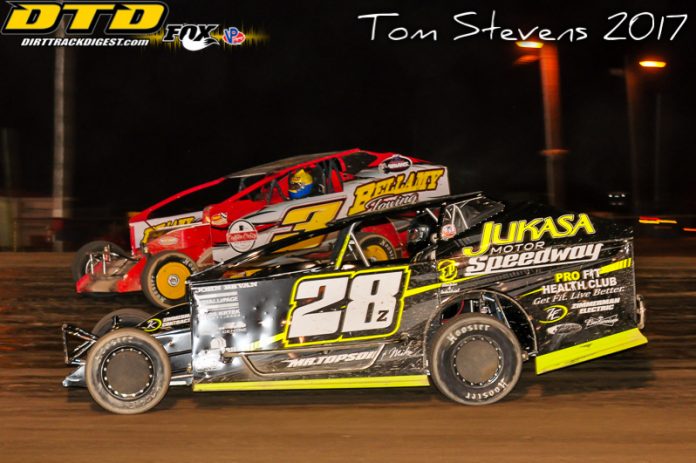 Tony Kelly of Niagara Falls won for the fourth time in the Central Fabricating & Welding 4 Cylinders with Greg Rauscher of Thorold also a five time winner in the Novice Sportsman Division in the Bobcat of Hamilton Weekly Racing Series Event that also featured a Big glowing full moon off Turn 3.

“Before the season began … I made it a goal – to win in both cars in the same night,” revealed Sportsman Feature Winner Brent Begolo, “the car has been fast all year but it seemed I would always get mired in traffic. Tonight we were able to accomplish the mission.”

Before Begolo took control of the 25 Feature for the S&W Service Centre Sportsman Division on the front stretch of lap 15, then leader Dave Flannigan Jr. survived numerous restarts – most notably on lap 11 after Brad Rouse dropped from a top 5 position after losing control of his car in Turn 4.


Robbie Johnston took the field to the initial green flag until Flannigan became the new leader on lap 2.

With Begolo now out front, the race to watch was for second between Flannigan and Rob Knapp. Knapp would take over second spot and was challenging Begolo for the lead on lap 19 through increasing lap traffic.

Contact with in the final turn allowed Flannigan to regain second spot while Knapp’s night would end in Turn 4.

At the checkered flag, Begolo and Flannigan were followed by Brad Rouse who rebounded to take third as did Cody McPherson who needed repairs after becoming involved in one of the early incidents. Luke Carleton was fifth.

“The car has been off a few weeks,” said Begolo after his first visit to Victory Lane after winning the 15 lap Mod Lite Feature earlier in the night, “the Sliters have been hard at this past week … thanks to them cause this car is back!”

Marty deMoel was first to lead the Mod Lite Feature and set the pace until lap 4. Through turns 1 and 2 deMoel was briefly off pace after drifting high on the racing surface – opening the door for Begolo who took over top spot.

Rob Misener, in the Josh Sliter #17 followed Begolo into second spot and quickly the two team mates were side by side. Begolo was able to open up a 5 car lead until caution on lap 12.

Begolo resumed control on the restart but quickly it went three wide for the lead with Misener and Jeff May pressuring Begolo. When it all settled – Begolo was able to open up another lead until Misener lost control on the final lap.

In the one lap dash to the checkers – May would try to make a move but fell short.

Begolo and May were followed by Chris Watson, Steven Beckett and deMoel.

“It was a fast track tonight for sure,” said Gary Lindberg in Victory Lane for the first time of the season, “I’ve been struggling here and there but my brother Paul has been working on the car. I’m not sure what he did … but tonight it seems to have worked.”

Lindberg took the lead on lap 14 from early leader Tommy Flannigan and set the pace until a lap 16 caution. Back out front, Lindberg opened up a lead of about a ¼ lap by lap 20. By lap 25 – the margin had stretched to almost a straightaway.

Flannigan, who led from the drop of the green survived numerous yellow flags for on track incidents – the most notably were two red flag situations.

Flannigan actually lost the lead on the first lap to Tim Jones who quickly showed smoke. That smoke quickly turned to fire after a reported blown head gasket leaked oil onto the headers.

A second red flag stopped the 35 lap event on lap 9 after a quick yellow flag after a lap 8 restart led to chaos through the field. The end result had Boyd MacTavish and Scott Wood coming together just past the start finish line. The contact would send Wood’s car flipping towards Turn 1.

Both Jones and Wood were OK after their incidents.

With 10 laps to go, Lindberg was on cruise control ahead of a race for second spot between Pete Bicknell and Chad Brachmann. Mat Williamson would also close in.

Lap 28 would find Brachmann in second spot and in the closing laps was away to cut away at Lindberg’s considerable lead just a little.

Lindberg, Brachmann, Bicknell and Williamson were followed by Mike Bowman who came from the back to take fifth.

“It doesn’t matter how many times you get knocked down … it’s how you get back up” said Rob Murray in Hoosier Stock Victory Lane for the first time of the season.

Last week, an on track incident between Murray and Dave Bailey had his night end early. The final stages of this week’s 20 lap Feature had the two battling for top spot.

Bailey took the lead from initial leader Kyle Pelrine in a wild start that saw the battle for top spot three wide right from the start only slowed on lap 4 for caution.

Bailey came from third on the restart to take the lead and by lap 10 had opened up almost a ¼ lap lead. Two cautions on laps 12 and 13 would find Bailey out front. Lap 15 would have Bailey and Murray trading top spot until Murray found the advantage.

Murray would be slowed on lap 17 after Billy Bleich Jr would slow off the pace with engine issues.

Murray would resume the lead on the restart and at the finish would cross the line .770 seconds ahead of Bailey. James Thompson, Jim Lampman and Ryan Dinning would close out the top 5.

“I’ve thanked so many so far this year … but I’ve never thanked the fans,” said Tony Kelly in 4 Cylinder Victory Lane, “thanks for coming out every week and supporting the tracks I was getting closer and closer and went for it the last time in Turn 4 and it stuck!”

It was about at the halfway point of the 15 lap Feature that Kelly would take third spot and by lap 9 – caught the leaders Jason Coutu and Austyn Werstroh.

Coutu the veteran had set the pace from the start with second year driver Austyn Werstroh keeping pace in his best showing.

Werstroh had just started to challenge Coutu for the lead when he was challenged by Kelly who would take the spot on lap 10.

Coutu, Kelly and Werstroh had broke away to almost a straighaway advantage on the field until caution on lap 11.

Coutu was back out front on the restart until lap 13 when Kelly would challenge.

On the other side of the final turn move – Kelly would win by inches with Coutu settling for second. Werstroh would take home a strong third place finish with Garnet Wilson and Cole Hardy rounding out the top 5.

“I thought Dalton had me,” said Greg Rauscher in Novice Sportsman Victory Lane, “We’ve had so many drivers out over the season … it would be nice to get them all out on the same night … we need some more cars in this class. If you’re in the stands and thought about racing … just do it.”

Rauscher would lead the entire 10 lap event – even running side by side with 13 year old Dalton Slack making his first Saturday Night Start in the Chad Chevalier #12 after several Kart Championship seasons Tuesday Nights.

Congratulations to our latest Archer Truck Centre Driver of the Week – Central Fabricating & Weldiing 4 Cylinder Driver Tom Neale. A Big Thank You to all the drivers that participated in the annual Big Rig Truck Show and Shine.

Show Time is 7 PM with the first events – the CAA Niagara Dedication to Racing Honorees and the L. St. Amand Enterprises Wall of Fame Inductions. Grandstands open at 5:30. 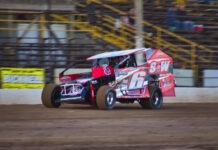