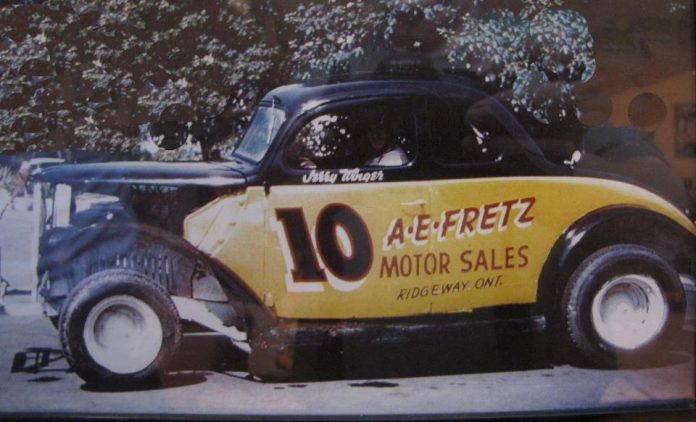 Once again hosted by Merrittville Speedway’s Reunion Committee headed by Chairman Rick Kavanagh, the night salutes 66 years of dirt racing excitement at one of Canada’s oldest race tracks in addition to the annual Inductions into the L. St. Amand Enterprises Wall of Fame.

Neil Sharp of Thorold and Lee Webber now of North Carolina are the 2017 Inductees with the ceremony set for just before 7 PM.

“Up until the 65th Anniversary last season we would not announce our honorees before the ceremony,” explained Committee Chairman Rick Kavanagh, “but we thought it would be important that family, friends and fans of Neil and Lee all knew about this special occasion and could share it with them.”

Merrittville Speedway’s Reunion Committee is also made up of former drivers – Jeno Begolo, Ted Renshaw Terry Huffman, Bill Willard Jr. and Ken Walsh as well as Mark Swartz and the Speedway’s former GM Erica Bicknell-Jones and Jim Irvine. Kavanagh is the son of former Speedway owner Ken Kavanagh who is also a Wall of Fame Member.


A huge part of the night is all the reminiscing that takes place in celebration of the track’s now 65 consecutive seasons. The Drivers of the past enjoy meeting with the fans of today – many that can remember the early days of the sport. Just as drivers today can be second or third generation, so too are some fans.

Prior to race time race fans can look forward to meeting many of the families that have been integral in the success of the sport with a Generations Display along the L. St. Amand Enterprises Wall of Fame. Current generations will have their 2016 Race Cars on display next to their elder’s Wall of Fame Induction Signs.

The Jerry Winger Memorial dates back to the 1959 Season when it was established after an up and coming racer and Point Champion Jerry Winger passed away due to illness.

George Winger was the first winner and in the modern era of the annual award – former winners Pete Bicknell, Chad Brachmann, Mike Bowman and Tyler McPherson are all winners in 2016.

Going back to July 2nd, 2001 … Robbie Krull won the first 50 lap segment while the final two segments were won by Danny Johnson.
In the beginning, Jerry raced his own cars and won his first championship at Merrittville Speedway in 1953. Jerry Winger was at the top of his sport in 1957 and would capture the points championship at his home track Merrittville Speedway. From 1958 on, Jerry developed an illness that would limit his driving in 1958 and 1959. During the 1959 season, the condition called nephritis claimed his life.
Jerry Winger was a friend to all at Merrittville Speedway and so in 1959, one solemn night Murray Stricker drove the bright red and white race car on to the track one last time. In front of the grandstand, the #10 was peeled off the car permanently. The owners of Merrittville Speedway decided to retire the #10 forever and to this date no modified stock car can wear it.
Also in 1959 the Jerry Winger Memorial Trophy was initiated by his former car owners Hugo “Butch” Bogusat and Al Aalto. Every year after there would be a special race to compete for the trophy.
The trophy would disappear for decades after that, but after much detective work, it was located in Alabama in 1996. By 1997 it had crossed the border to be returned to us, along with the John Spencer Memorial. Former Speedway owner Ken Kavanagh & his son Rick reconditioned the trophy and to this day, the Merrittville Speedway Reunion Committee , award this trophy to the winner of a Jerry Winger Memorial Feature, every year on Reunion Night,
Winners of the Jerry Winger Memorial Trophy

Specializing in all aspects of Landscape Supply & Service for 77 years, L. St. Amand Enterprises offers an excavating, trucking and backhoe service and complete landscape installations. In addition to lawn maintenance programs they carry complete lines of specialty garden soils and mulches, stone, sand, natural stone, precast walls and interlocking brick in any quantity available for pick up or delivery.

A bulk material spreader service that allows the material to be put where it is needed is available. Flatbed and forklift services are also available.

The 2017 Induction Ceremonies into the L. St. Amand Enterprises Wall of Fame are scheduled to take place just before race time on the CAA Stage. Racing will feature the Jerry Winger Memorial for the Pinty’s Delicious Foods 358 Modifieds plus Vintage Race Cars.