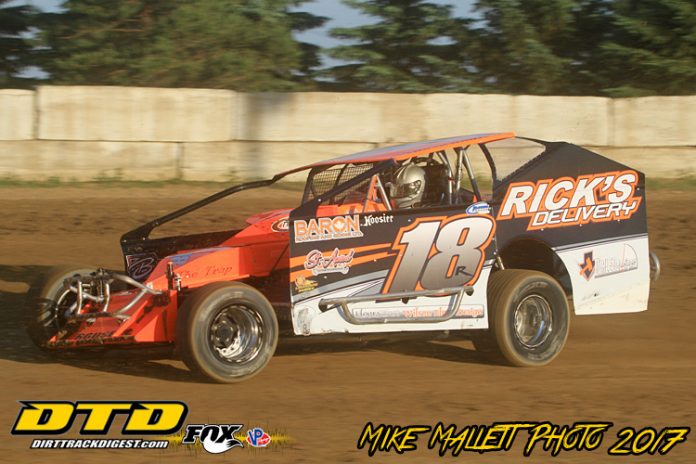 THOROLD, ONT – For the fourth time in 2017 and the second straight week, Brad Rouse visited Victory Lane in the S&W Service Centre Sportsman Division. The St. Catharines racer won the second round of the David Chevrolet King of the Crates Series – part of Hingston Metal Fabricators Night Saturday July 22nd.

Rain with 12 laps complete in the 35 lap Pinty’s Delicious Foods 358 Modified Feature delayed the Bobcat of Hamilton Weekly Racing Series final event of the night. With the remaining 23 laps to be completed Saturday July 29th – the Novice Sportsman Division unfortunately will not be on the schedule.

After an early caution, Rouse took the lead from initial leader Luke Carleton to start lap 2. Rouse would survive two restarts before taking the 24 car field back to green on lap 8.

Mark Chiddy would quickly challenge the leader – taking over top spot down the backstretch after the restart before Rouse was back in control before another caution on lap 11.


Rouse and Chiddy were side by side on the restart and continued the back and forth battle through another restart on lap 14. Lap 21 would be the turning point of the 30 lap event as once Rouse regained top spot he was able to drive away from Chiddy and the field.

One final caution on lap 28 set up a two lap dash to the checkered flag with Rouse coming home ahead of Chiddy, Adam Leslie, Jay Mallory and Rob Knapp.

The David Chevrolet King of the Crates Series Finale is set for Saturday August 19th when the 40 lap Gabe Bellante Memorial will pay $1,000 to the winner as part of Niagara Trailers Night.

“I kind of snookered them,” said Tony Kelly of al lap 10 restart move that saw him take over the lead from front runners Vincent Pagnotta and Alex Riley, “the 13 (Pagnotta) might have been a little preoccupied with Alex (Riley) … I saw an opening and took a shot.”

Vincent Pagnotta was first to lead the 15 lap event before losing top spot to Chris Laskey on lap 2. Just behind the two leaders the race to watch was for third as Riley in the borrowed Kyle Rothwell #114, Garnet Wilson and Kelly were quickly locked in a three wide battle.

Riley would land in second spot on lap and by about half way, Pagnotta was back in the lead. Just as Riley took over top spot – a caution on lap 10 had the running order going back a lap,

Three wide on the restart – Kelly was the new leader until slowed on lap 12 for the final caution.

At the finish, Kelly was followed by Riley, Pagnotta, Wilson and Jay Moulton.

“The race track was amazing,” said 7 time Hoosier Stock Feature winner Dave Bailey, “I can’t believe how tacky it is!”

From 11th starting spot, Bailey would make his way to the front running at times 4 wide with front runners Billy Bleich Jr., Jim Lampman and initial leader Tanner Podwinski who had a spirited early race battle with Vince Fargnoli and Kyle Pelrine.

Fargnoli would take over the lead from Podwinski who unfortunately would get too high along the front stretch but fortunately didn’t fall too far off the pace.

Bailey would take over third on lap 9 and moved up to second one lap later. By lap 13, Bailey had caught Fargnoli and the two swapped P1 several times before Bailey found the advantage on lap 16.

Bailey and Fargnoli finished ahead of Pelrine with Bleich and Rob Murray rounding out the top 5.

Marty deMoel beat fellow front row starter Tucker Wood the the green flag for the 20 lap Feature for the Wood Motor Company Modified Lites before the race was stopped for a multi-car incident the first time down the back stretch.

Unfortunately the incident had Rob Misener flipping his car once again.

Sliter was back in control but quickly was challenged by another team mate – Brent Begolo.

At the half way point, the advantage for Sliter was about a car length over Begolo – a margin he kept to the checkered flag.
Sliter and Begolo were followed by Beckett, Tyler Winger and Pietz.

Paul Cunningham was first to lead the Novice Sportsman Feature before Gregg Rauscher took control with one lap complete.
Gord McIntosh ttried everything he could in the last half trying to take top spot from Rauscher but fell about a car length away at the finish.

Tim Jones set the pace at the start of the 35 lap Feature for the Pinty’s Delicious Foods 358 Modifieds until Todd Gordon took control one lap in.

Tommy Flannigan would challenge Gordon right away – taking over the lead on lap 4. Gordon would battle back regaining top spot just before a lap 5 caution.

Flannigan would regain top spot on the restart and quickly opened up a 5 car advantage by lap 12. Mike Bowman would fall off the pace dropping from a top 5 spot slowing the field.

Flannigan was back out front on the restart but the field was slowed right away for a light rain that increased forcing officials to call the race.

Flannigan and fellow racer Ryan Susice who fell victim to a flat tire earlier but returned to action both were hoping to celebrate their birthdays with wins will get a chance for belated celebrations when the final 23 laps are completed as the race was called prior to half way.