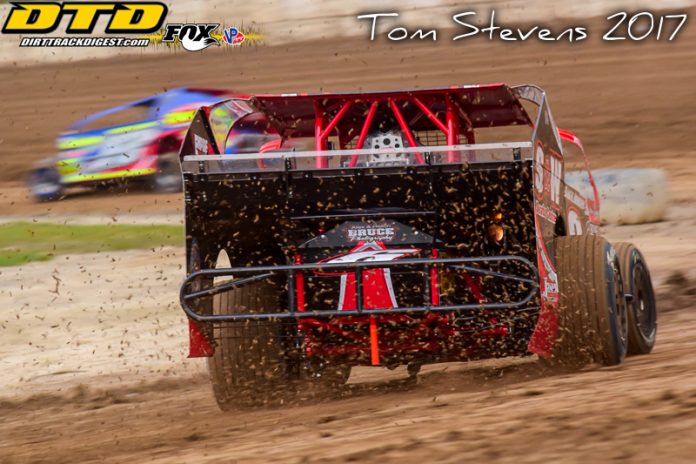 CONCORD, NC – After two weeks off, the Super DIRTcar Series is set to roar back to life with a pair of stops in the Niagara Region. The Series will visit Merrittville Speedway on Monday, August 7 for the 8th annual Bob St. Amand Memorial 100 and Ransomville Speedway on Tuesday, August 8 for the 33rd Summer Nationals.

The Super DIRTcar Series’ annual stop at Merrittville, located in Thorold, Ont., is always a fan favorite. The race takes place each year on Ontario’s civic holiday and the first Monday in August. This year’s event marks the 33rd Series race at Merrittville, dating back to 1972. The Bob St. Amand Memorial honors the former Merrittville champion and official who passed away in 2009. The race also features the coolest driver introductions in all of motorsports as the cars roll directly in front of the grandstands before taking the green flag for the 100-lap main event.

“That’s probably the biggest race I’ve ever won,” Williamson said. “It was pretty cool when your full family is there and your friends are there. You’ll never forget your first Series win. Now we’re looking to get the second one and hopefully we can do it this week. They’re never easier to win, but it makes it a little bit easier when you’re at your home track.”


Merrittville has a unique D-shape configuration with an inside wall and a tricky moat separating the front straightaway from the outside retaining wall. Knowing the preferred line around the often-slick track from weekly competition offers a decisive advantage, Williamson said.

“This has been my home track since I was a kid,” said Williamson, who competed regularly with the Super DIRTcar Series in 2016. “Last year when we went to a place like Five Mile Point that we had never been to, it was a big disadvantage compared to the guys who race there every week. To be on the other side of the fence and have the advantage in our corner makes me pretty excited.”

Following Monday’s showdown at Merrittville, the Series will travel approximate 30 miles southwest on Tuesday to New York’s Ransomville Speedway for the Summer Nationals. The 33rd edition of the event is also the Super DIRTcar Series’ 35th all-time visit to the Western New York 5/8-mile track.

Stewart Friesen enters the weekend fourth in the Series point standings and as the two-time defending winner of the event. Friesen’s family, led by his grandfather Stan Friesen, owned and operated Ransomville for 43 years until the 2016 season. Friesen grew up at the track and was tasked with nearly every job possible around the facility during his childhood, from mowing grass and changing boards in the grandstands to collecting garbage and cleaning bathrooms.

“I definitely know probably every nook and cranny of the whole facility,” Friesen laughed. “We didn’t get to race there as much and I was never a regular there once I started running Modfiieds, but it was always cool to go home and reconnect with everybody I grew up with at Ransomville and it’s still the same.”

Friesen is a five-time winner of the Summer Nationals, run annually in memory of his uncle Alex Friesen who was killed in a snowmobile accident. He has won the event in each of the last two seasons. He has a pair of victories already this season with the Super DIRTcar Series, which came at Utica-Rome Speedway on July 2 and Weedsport Speedway on July 11. Friesen hopes to shake off a disappointing trip to Quebec and begin the month of August with another victory.

“We definitely had some good momentum,” Freisen said of his success in early July. “We have to shake off the Quebec trip and get back to work at Merrittville and Ransomville. I haven’t had a ton of success at Merrittville, but I think we know what we need to do going into it. We’re definitely prepared and ready to get through the last part of the summertime grind.”

Friesen will have to contend with the full cast of Super DIRTcar Series full-time pilots and Ransomville regular. Billy Decker is the current Series point leader entering the Niagara swing by just two markers over Larry Wight. Decker has won four of the last 10 Series trips to Ransomville, with the most recent coming in 2014.

Local driver Ryan Susice, affectionately known as the ‘Ransomville Renegade’ is the current Ransomville point lead and is no stranger to Big Block Modified competition. He has one win this season at Ransomville while ‘Mr. Small Block’ Pete Bicknell is second in the Ransomville weekly standings with two victories. Erick Rudolph, who scored a second-place finish in Series action at Sharon Speedway, is third.