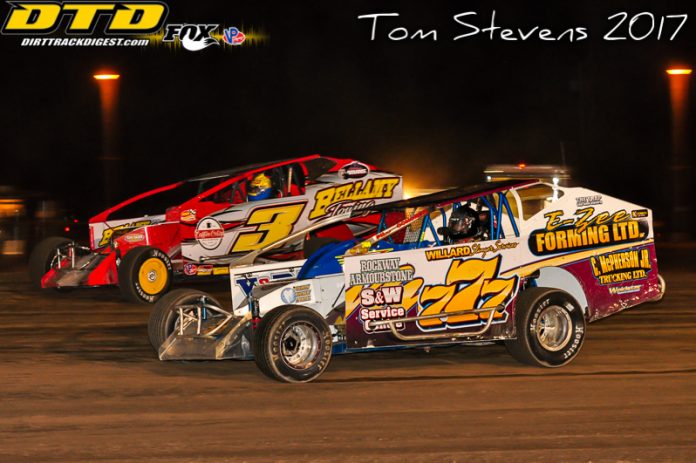 “I’m a little overwhelmed,” said Chad Brachmann of Sanborn NY after his 4th 358 Modified Win of 2017 and second straight, “ I’m really fortunate to have (car owner) Chris Bellamy and his guys behind me.”

Unlike last week when Brachmann took the lead the final time out of Turn 4, the point leader took control of top spot on lap 32 and cruised to his second straight and 4th of the season.


Mike Bowman took the field to the initial green flag in the debut of his new Bicknell Chassis and by lap 10 held a lead of about 3 seconds over Fred Carleton.

Five laps later, Carleton had narrowed the lead with Scott Wood also on the move. Carleton would catch Bowman pulling alongside only to be slowed for the first time on lap 18.

The return to green saw quite a battle unfold between Bowman and Carleton with the two swapping the lead several times. With everyone watching the race for top spot, Gary Lindberg quietly took over third.

By lap 25, Carleton found something to his liking and opened up a couple car length advantage on Bowman who was now being challenged by Brachmann.

Brachmann was followed by Carleton, Bowman, Lindberg and Wood.

“I’m so glad to have this opportunity,” said James Friesen in Victory Lane for the second time of 2017 although the first in the Gord McIntosh #72, “Gord and his guys work so hard on this thing … it’s cool for both of us to win!”

After the initial start was called off, Luke Carleton was first to lead the 25 lap Feature. Action three and four wide through the pack was slowed the first time on lap 7 after Chris Storm slowed off the racing surface.

The restart was a drag race between Carleton and Friesen before
Friesen found the advantage down the backstretch. Friesen would be slowed for caution on lap 9 with Justin Sharp the new leader on the restart.

Friesen’s win in the Gord McIntosh’s #72 wasn’t the first time the car was in Victory Lane as it went right from the Novice Sportsman Feature to the Sportsman.

Paul Cunningham was first to lead the 10 lap event with the battle for top spot quickly three wide.

When it all settled – McIntosh was the new leader on lap 2.

By halfway, McIntosh opened up almost a straightaway lead – a margin he would keep to the checkered flag.

“The car was tight in the heat … I left it alone – in the feature it came to me,” said Rob Murray in Hoosier Stock Victory Lane after thanking his crew for all their help, “Thank God for Steve … I was working in the shop and the car came off the stands on me … he was there to help get me out.”

Thompson quickly opened up a comfortable lead but by lap 4 Murray was in the runner up spot from an 11th place start.

As quickly as Murray took over top spot on lap 6, caution would slow the pace on lap 7. Murray would again set the pace until another caution just past halfway erased his lead of some 10 car lengths.

Murray was back out front on the restart – ahead of Brad Sheehan and Dave Bailey who had made their way to the front.

Bailey would take second on lap 13 but even through increasing lap traffic in the closing laps – there was no catching Murray.

Murray, Bailey and Sheehan were followed by Thompson and Jim Lampman.

“It was a great race,” said Pro 4 Truck Feature Winner Dylan Llord of St. Catharines, “I know Terry (Ronning) knows the ins and outs here but I’ve watched a lot of races here growing up with friends like Tyler McPherson.”

Llord watched Ronning take the lead at the start of the 15 lap event but by lap 4 he was the new leader.

Caution on lap 8 would slow Llord after Mitch Dumont, Miss Merrittville Jaime Ayers and Kyle Tomaski came together in Turn 4.

Llord would regain the lead on the restart with Ronning in close pursuit.

In the closing laps Llord would stretch his lead through to the finish ahead of Ronning, Steven Vanderzanden, Danny Wurster and Nathan Monahan.

“It was a lot of fun racing the invaders,” said Mark Shadwell of Hamilton who also won the Nostalgia Night Vintage Race Car Feature last month, “I raced a lot here over the years … so I guess experience pays off.”

Caution would slow the pace with Les Myers quickly taking over top spot. Shadwell would take over second spot on lap 10 and by lap 11 was the new leader.

At the finish, Shadwell was followed by Brian Comeau, Mayers, Bill Wilard and Ketch.

“This reminds me of racing my 358 20 years ago,” said Curt Sherwood of Sanborn NY who won the second Thunder of the Dirt Vintage Racing Series Feature, “thanks for the opportunity – I haven’t been in a race car for 10 years.”

Luke McKinnon of Brockville led the field to green – slowed for caution on lap 5. McKinnon resumed control on the restart until Sherwood became the new leader in Turn 3.

Some contact amongst the leaders saw Brian Billings as the new leader with Sherwood back in control on lap 9.

In the closing laps, Sherwood and Billings drove away from the field to about a straightaway lead at the finish.

McKinnon, Tim Natalino and Ryan Comeau closed out the top 5.

Kids will also take to the track with the annual Box Car Races.

MERRITTVILLE SPEEDWAY SPONSORS The 2017 66th Anniversary Bobcat of Hamilton Weekly Racing Series for
Merrittville Speedway’s 5 Divisions was brought to race fans and racers by division sponsors – Pinty’s Delicious Foods, S&W Service Centre, Hoosier Tire Canada, Wood Motor Company and Central Fabricating in addition to many marketing partners Visit them at http://www.merrittvillespeedway.com/sponsors.htmand visit them when you require their products and/or services.