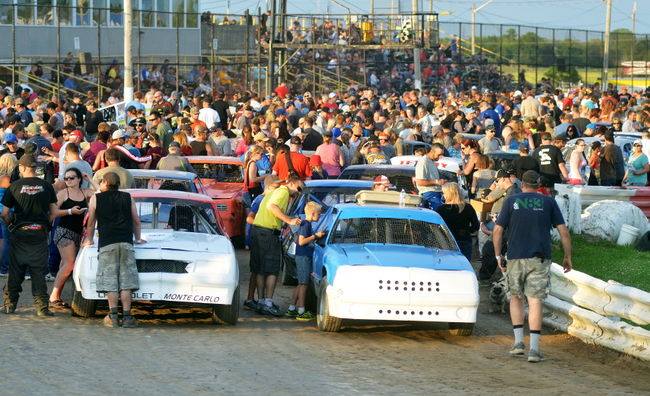 “Semenuk’s Esso Night is always a great night for fans and racers,” informs (Merrittville GM) Erica Bicknell-Jones, “our hats off to the family and their customers for coming up with some great giveaways. One thing for sure though … in some of our division no one will want to give away any points!”

With Pinty’s Delicious Foods celebrating the close of there first season as Divisional Sponsor, the Pinty’s NASCAR Canada Show Car will be on display and will join our ceremonial 50th Anniversary Pace Car owned by former race Elliot Boyuk on the track ahead of the John Spencer Memorial.

Williamson has won the Spencer Memorial the past two seasons while Brachmann has taken it once. Bicknell has won the finale 6 times over his career. Mike Bowman – solidly in 4th spot has won it three times.


The race to watch could be the one for 5th as Billy Dunn currently holds the spot only 7 points separate the Watertown NY driver, Scott Wood and Mark D’Ilario in the Semenuk’s Esso # 08.

Year in and year out … some of the closest racing takes place in the Van Raine Construction 4 Cylinder Division and 2015 has been no exception.

Rob Goulding looks to be in line for his first career Points Championship with Triple Crown Series Champion Kyle Haynes going into the night 20 points behind the leader. Tyler Lafantaisie sits 5 points out of second spot with Kyle Rothwell and Sam Iftody rounding out the top 5.

When you look back at the season … while some of the points races will go right down to the final night … only one rainout (June 27th’s Cotton Inc Night) has allowed several drivers to amass unsurmountable leads.
With an outside chance – Rob Misener trails team-mate Josh Sliter by 42 points in the race for the Rev’s Full Throttle Powersports Modified Lite Title. A third JSR driver sits in third spot – Jamie Gilbert with defending champion Jeff May and Dylan Davidson separated by just 2 points.

While Mark Fawcett enjoys a 126 point lead in the Hoosier Stock Division – the battle for second will go right down to the final lap as Dave Bailey and Jim Lampman go into the finale. Not to be left out of the running – Billy Bleich is just 14 points back of that battle. The race to be in the Top 5 is yet to be settled either as Kyle Pelrine and Kevin Knapp are just 5 points apart.

Second generation driver Gary Lindberg has already locked up the 2015 Title – taking a 91 point lead into the final night over Brad Rouse with Chad Chevalier, Cody McPherson and Paul Gaboury as the top 5.

The Season Point Finale for the 358 Modifieds honors John Spencer who was an up and coming racer who passed away as a result of a racing accident in 1953 at the former Stamford Park in his home town of Niagara Falls.

Later that season and to coincide with the final points event of the season for the Modifieds, his crew created an Annual Memorial Award. Presented annually until the 1965 season, the award was lost until 1999 when former Merrittville owner Ken Kavanagh and his son – Reunion Committee Chairman Rick recovered it and restored it in time for presentation once again in 1999.

Race Fans can look forward to meeting all the drivers from each of the 5 Divisions as Semenuk’s Esso Night also includes the final Autograph Night. All the race cars will be parked on the front stretch for the meet and greet after qualifying is complete.

Before or after the races you have to know too that you can get your fill of Gas … Diesel or Propane at Semenuk’s Esso – located just south of the track at the corner of Merrittville Highway and Hwy 20 at Turner’s Corners.
Semenuk’s Esso is one of the last remaining Full Service Gas Stations in the area – featuring Gas, Diesel and Propane at competitive prices. Having the closest ATM to the Speedway – it’s the one stop to make on your way to the track … on the way home and during the week as they carry many convenience items.

The Semenuk’s Esso presentation of the 2015 Championship Chase Finale begins when the gates open at 5:30 with Show Time at 7:00 PM.

Merrittville Speedway is located at 2371 Merrittville Highway in Thorold. For directions click on http://www.merrittvillespeedway.com/directions.html or call 905-892-8266 or via e mail – ebicknell@cogeco.net.