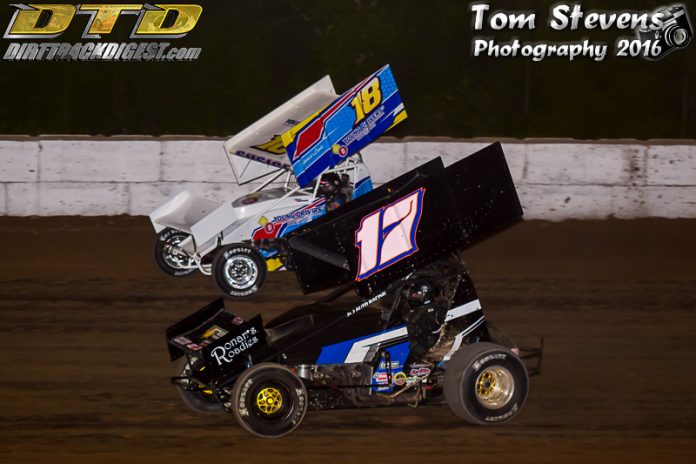 “There were so many lap cars … I didn’t know who was leading,” said Ryan Susice catching his breath after a thrilling late race move to win his 2nd career Sprint Car Feature, “they left the outside open … maybe some of my experience here paid off.”

Susice – a Saturday Night competitor in the Randy and Bob Slack owned 358 Modified started the A Main 10th in the Young Drivers of Canada #18 Sprint Car raced to third by lap 22.

The ‘they’ were Jimmy Huppenen and Dylan Westbrook who held down first and second spots. Holly Porter led the field into Turn 1 three wide.


When everything settled down – Huppenen was in control of top spot with the Fenwick Driver on cruise control, opening up a lead of a quarter lap quickly. Coming up on slower cars wouldn’t slow him.

Westbrook who won his first Merrittville Sprint Car Feature back on June 24th’s Avondale Night was in the runner up spot but at lap 15 was a straightaway behind Huppenen.

By lap 20, Westbrook had narrowed the margin to about a ¼ lap.

Two laps later, by the time Susice had taken over third … the two were catching Huppenen.

Exiting Turn 4 with the white flag in sight Susice made his move around the outside of both Westbrook and Huppenen – a move that brought the crowd to it’s feet wuth Susice dangerously close to the front stretch barrier.

Susice would lead the entire final lap ahead of Westbrook, Huppenen, Brown and Cory Turner.

“We’ve struggled here this season which isn’t normal for us,” said
Cody McPherson in Victory Lane after winning the 50 lap Sportsman Series Event, “to wrap the season up here like this is pretty good though.”

Brianna Ladouceur and Brent Begolo took the field to the green flag with the invader Ladouceur the initial leader. Begolo would take control on lap 3 before caution slowed the pace on lap 4.

Begolo would lead another restart to green on lap 6 and two laps later … the battle for first went three wide between Begolo, Brad Rouse and outsider Ronnie Davis.

Rouse would take the lead on lap 9 with control of top spot exchanging hands several times until Rouse had a clear hold on top spot before lap traffic on lap 17.

By lap 20 the top 5 was Rouse, Begolo, Davis, McPherson and Dave Marcuccilli.

McPherson quickly was challenging Begolo and by lap 30 was challenging Rouse – taking the lead 4 laps later. By lap 40, Begolo would catch Rouse. By lap 45, McPherson had pulled away to a ¼ lap lead until a late caution.

At the finish, McPherson would lead Rouse, Begolo, Davis and Marcuccilli.

“This one’s for Bruce Hough … a family friend and longtime race fan who recently passed away … and it’s my wife Kelly’s Birthday,” said Rob Murray in Victory Lane after winning the 50 lap Duel on the Dirt Feature, “thanks to my crew – they work day and night on this thing.”

Murray would have to call on his crew at the track as well falling victim to two flat tires in separate events. Murray and Jason Lungaro led the field to green until Murray took control of the lead.

An incident with a slower car on lap 14 sent Murray to the pits for repairs with Dave Bailey and Billy Bleich Jr batting for top spot on the restart. Back and forth the two would lead until Bailey would have a clear lead by lap 19.

Bailey would soon be challenged by Ryan Dinning with Dinning the new leader on lap 23 who was driving away from the field until a lap 31 caution. Dinning would resume control on the restart with the action back in the pack three and four wide for position.

The next caution unfortunately was for Dinning who retired to the pits on lap 36 with engine problems. The new leader was Ken Sargent until James Thompson until a lap 39 caution.

With Jason Fontaine, Murray, Sargent and Jim Lampman battling, Thompson was able to open up a 5 car lead until Murray began to close. By lap 45 the new leader was Murray until a final caution slowed the field on lap 47.

In the three lap dash to the finish – Murray would edge Thompson by a ½ car length with Sargent, Bailey and Lampman as the top 5.

With Llord off quickly to a 10 truck length lead at the start – the race to watch was between Mitch Dumont and Kyle Tomaski for the runner up spot.

Eventually Tomaski would overtake Dumont and as the race wound down – the two would begin to close in on the leader.

At the finish – Llord came out ahead of Tomaski by about a truck length with Dumont third Nathan Monahan and Miss Merrittville Jaimie Ayers rounded out the top 5.

Former racer John McKenny would lead the field to the green flag in the Novice Sportsman Feature in the Dave Flannigan Jr #74 with Gregg Rauscher in the Terry Larmet #8 closing in by lap 5.

Charlie Lynch would take over the runner up spot and by lap 8 was the new leader.

Two of Merrittville Speedway’s former Kart Racers got their starts on the 2018 Season.

After racing in the Wood Motor Company Modified Lites as a rookie in 2017 –12 year old Tucker Wood made his first start in the Novice Sportsman Division.

Kyle Phillips of Grand Island NY has practiced most Wednesdays over the summer and made his first Sprint Car A Main Start with the Southern Ontario Sprints.

A third former Karter – Donny Lampman has also moved up to Saturday Nights having competed much of the season in the Hoosier Stock Division alongside his Dad Jim Lampman and sister Kathleen Lampman who still competes Tuesday Nights.

Merrittville will host a Wednesday Night Practice on September 13th. Open to all divisions – the Pit Area will open at 5:30 and the Track at 6:30.

The 2017 Duel on the Dirt Series continues with a Home Track Event for the Ohsweken Speedway Friday September 15th followed by the final Combined Event at the Brighton Speedway Saturday September 23rd.

The 2017 Awards Banquet is Saturday November 25th at Club Castropignano. Tickets and further information will soon be available.