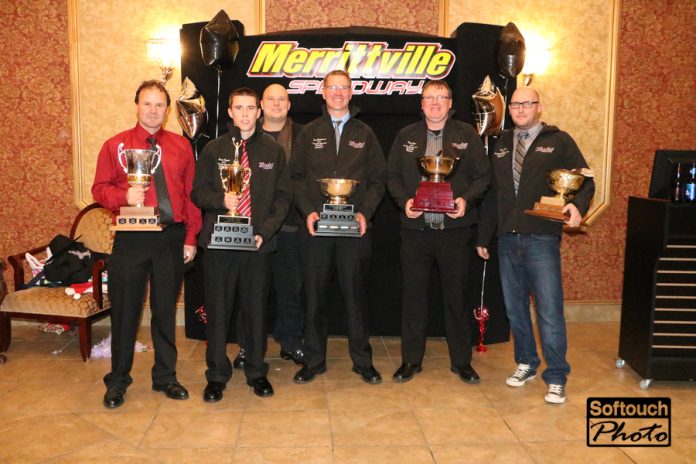 Chad Brachmann took home top honors for the 3rd time in his career in the Pinty’s Delicious Foods 358 Modified Division resulting in the Sanborn NY resident being named the Archer Truck Centres Driver of the Year.

Thorold’s Brent Begolo won his first Wood Motor Company Modified Lite Title as a rookie and when combined with repeating his second place finish in the S&W Service Centre Sportsman Division from last season was named the 2017 Performer of the Year.

Brad Rouse of St. Catharines and Dave Bailey of Hagersville both won their second career championships in the S&W Service Centre Sportsman and Hoosier Stock Divisions.

Two other Drivers celebrated their first Championships – Tony Kelly of Niagara Falls and Gregg Rauscher of Thorold in the Central Fabricating and Welding 4 Cylinder and Novice Sportsman Divisions.

Tomaski also sponsored the Triple Crown Series for the 4 Cylinders which had as it’s Champion – overall Champion Tony Kelly.

Co-announcers Jim Handley and Lou Caetano performed Masters of Ceremony duties – presenting the top 12 points finishers from each division with point fund monies in addition to a wide variety of special awards.

Traditionally Rookie of the Year Awards are presented to the top Rookie in the Point Standings. 2017’s Modified Lite Rookie Brent Begolo asked that his award be presented to Wood, also a Rookie who turned 12 in July.

Several history-laden awards were also presented during the event.

After a crash at Ransomville for fellow competitor James Friesen left his car unrepairable – McIntosh provided Friesen with his car to maintain his points.

The Begolo-Little Award for the Most Improved Driver was presented to 4 Cylinder Competitor Alex Riley of Thorold for his 3rd place finish in the Triple Crown Mini-Series and 2nd place in the Overall Standings in the Central Fabricating and Welding 4 Cylinder Division.

The Pete Cosco Memorial Merrittville Speedway Car Owner of the Year Award was presented to Andrew Sittler of St. Catharines.

The Gordie Award named after former Merrittville Announcer and Wall of Famer Gordie Wilson goes to a person, or group of people who exhibit dedication to the sport was presented to former owners Pete Bicknell and Randy Williamson and their families both of St. Catharines.

For more than 30 years the two have operated Bicknell Racing Products serving the racing community. In 2017, the industry leading company won more than 730 Features and more than 50 Series and/or Track Championships across North America and Australia.

Before Race Director Tom Beales closed out the proceedings with a preview of the 2018 Season, Merrittville co-owner Lorraine Spiece awarded a $250 Auto FX Graphics and Signs Gift Certificate to Sportsman Competitor Jay Mallory via a draw of Drivers in attendance.

Beales announced that at the 2018 Awards Banquet the Top 5 Drivers in the S&W Service Centre Sportsman Division will be eligible for a drawing for a Wegner W16 Engine that would facilitate a move to the Pinty’s 358 Modified Division in 2019.

With the recent announcement of the new Dave’s Auto and Speed Centre V6 Division, the Novice Sportsman Division will not be returning in 2018. Beales also thanked all the Race Fans, Race Teams, Staff and Sponsors on behalf of Don and Lorraine Spiece for everyone’s support in their first season of ownership.

For information on Merrittville Speedway’s 66th consecutive season as the best family entertainment in Niagara – visit www.merrittvillespeedway.com or call the Office during business hours – 905-892-8266.

For a complete listing of the 2017 Points Standings – click on http://www.speednetdirect.com/points.php?track_id=8430&nav_step=results

MERRITTVILLE SPEEDWAY SPONSORS The 2017 66th  Anniversary Bobcat of Hamilton Weekly Racing Series for Merrittville Speedway’s 5 Divisions was brought to race fans and racers by division sponsors – Pinty’s Delicious Foods, S&W Service Centre, Hoosier Tire Canada, Wood Motor Company and Central Fabricating in addition to many marketing partners Visit them at  http://www.merrittvillespeedway.com/sponsors.htm  and visit them when you require their products and/or services.