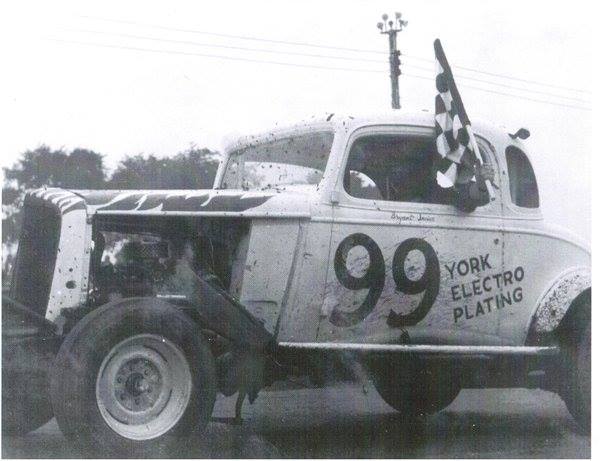 THOROLD, ONT – As Merrittville Speedway is preparing for the 67th season of action at the famed d-shaped oval, the racing community is mourning the loss of former track owner Bryant Irvine. Irvine passed away Sunday, April 1st after a short illness at the age of 81.

Bryant’s presence at Merrittville Speedway goes back to the 1955-56 season when he and his friend Dave Boese decided to try the relatively new sport of stock car racing. Bryant’s first car was the former Murray Stricker 1933 Ford Coupe powered by a flathead Ford V8. Bryant re-lettered the car #99 with help and sponsorship from his father-in-law C. H. “Shorty” York at York Electro Plating.

Bryant was always looking for ways to improve his race car and he did so with his first-time build, a 1934 Chevrolet Coupe. This car was the first stock car to have center steering. While it did make for a safer car, it also gave the car more center weight.

Irvine became known as Bee 99, winning races against the likes of Jerry Winger, Jeno Begolo, and Murray Stricker. Irvine had noticed that he and his Canadian competitors lacked a source for speed equipment, so he set out to secure engine parts, as well as machining and boring from his Ormond Street shop in Thorold. He further expanded his resources by opening his Ontario Speed Shop to offer the availability of parts and services from California to the local racers.


During the 1960’s, Bryant and his wife Marilyn continued to stay interested in racing but now were responsible for operating York Electro Plating in Thorold. Irvine remained involved in the sport more and more as a spectator. In the 1960’s and 70’s, he attended races at Watkins Glen, Mosport, and Indianapolis, as he had a passion for road course racing.

During the late 70’s and early 1980’s, Irvine’s interest in local dirt track racing remained strong, and he became involved on the sponsor side, putting York Electro Plating on the side of Brian Stevens, Davey Moore, and Dennis Veilette’s cars, among others. The shiny chrome bumpers on Ivan little’s car was also done locally for many years at York Electro Plating.

During the 1987 season, the opportunity would arise for the Irvine Family to purchase Merrittville Speedway. Bryant left the office duties to his wife Marilyn, and his two children Jim and Kathy, while he spent his time working on Merrittville’s clay surface. Working the track was one thing Irvine loved to do. He grew up on a farm and the serenity of prepping the track brought back the days of plowing fields.

In 2003, Bryant and Marilyn decided that it was time to sell Merrittville Speedway and focus on the business at York Electroplating. Although Bryant and Marilyn passed over the keys to Pete and Nancy Bicknell and Randy and Tracey Williamson that season, Jim stayed on as Assistant General Manager while Marilyn worked the front ticket gate and Bryant continued to groom and prepare the kart and stock car tracks weekly.

In 2017, Merrittville Speedway saw a change of hands. Don and Lorraine Spiece took over and once again, the Irvine Family continued with their hands in Merrittville history as they had in the past.

The Irvine Family has played a huge part in the success of Merrittville Speedway. The many additions and renovations including a new VIP tower, the installation of the scoring loop, new concessions, washrooms, building the go-kart track as well as Bryant’s never-ending desire to provide a smooth, dust-free surface for the competitors are something all of us will remember for a very long time.

As we enter the 2018 Race Season, there will undoubtedly be a large void left at Merrittville. Bryant’s steadfast demeanor and love of racing was something that was rare and true. His passion for the sport ran deep, and it showed in all aspects throughout his life. Although Bryant will be watching the races from above with all of his racing friends, his spirit will live on at Merrittville for generations to come.

Family and friends will be received at Pleasantview Funeral Home, 2000 Merrittville Highway on Thursday, April 5, 2018 from 2-4 and 7-9 p.m. and Friday, April 6, 2018 from 1-2 p.m. A Funeral Service to celebrate Bryant’s life will be held in the funeral home chapel on Friday at 2 p.m. Memorial condolences to a charity of your choice would be appreciated by the family. Please share your condolences, memories, and photos at www.pleasantviewcemetery.ca.