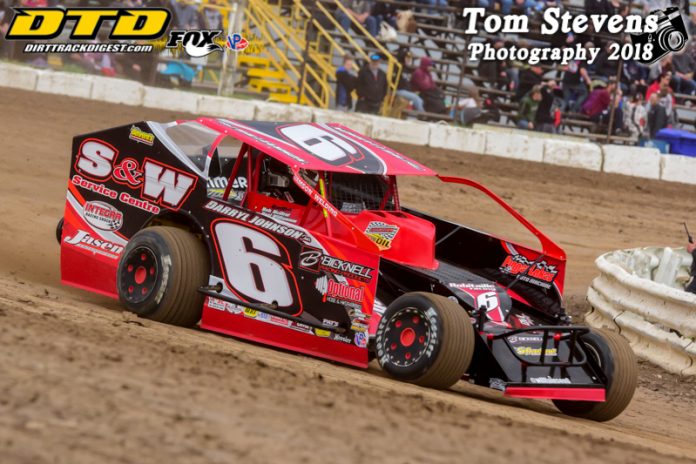 “I thought he was there til the end,” said Adam Leslie in Sportsman Victory Lane of a late race battle with Jay Mallory, “I’ve got to thank my crew for giving me such a rocket tonight.”

A caution with 5 laps to go in the 25 lap event erased a 2.5 second lead for Leslie and shortly after the return to racing – the leader and Mallory were side by side.

Second generation racer Brandon Gruhl was the initial leader with Leslie taking over the runner up spot some 5 car lengths behind by lap 5. Two laps later Leslie would take over top spot and by lap 10 simply drove away from the field.

By the halfway point, Leslie’s almost straightaway lead went away after caution slowed the field. With action in the pack three wide for position – Leslie was able to regain his straightaway lead ahead of Mallory.

From the final caution to the checkered flag, Leslie held off Mallory by 4/10ths of a second. Cody McPherson made a late race charge to take third spot with Greg Panunte and Trevor Wright closing out the top 5.

“Gary (Lindberg) had a good car … it was great racing him – we touched but it was accidental,” said 4 time 2018 358 Modified Feature Winner Mat Williamson of an incident in the 35 lap event, “in the end it was slower cars that may have hurt him the  most.”

In the closing laps, Lindberg was leading Williamson into increasing lap traffic with the two making slight contact racing into Turn 2 of lap 29. By lap 33 the two were side by side with Williamson making his move the final time down the frontstretch edging Lindberg at the line by .088 of a second.

Prior to that, Lindberg set the pace right from the start in the caution free race opening up a 5 car length advantage by lap 5. Williamson took second from Pete Bicknell on lap 6 and set his sights on Lindberg. With 10 laps to go – the gap was down to 1 second.

At the finish, Williamson and Lindberg were followed by Bicknell, Chad Brachmann and Mike Bowman.

“She’s fast,” said Rob Murray in Hoosier Stock Victory Lane for the third straight time, “I made some contact with Billy (Bleich) … I felt bad for him.”

Dave Small was the initial leader of the 20 lap Feature and by lap 5 quickly opened up a lead of 5 car lengths. Murray and Bleich would come together on lap 6 sending Murray to the rear of the field.

With Small out front on the restart – Murray had already made up 9 spots in just 3 laps. By lap 12, Small would have a slight lead on Brad Sheehan with Murray all the way to third.

In the one lap dash Murray would come home ahead of Small, Sheehan, Dave Bailey and Kyle Pelrine.

“I like a slick track better … it makes it a finesse track,” said Modified Lite Feature Winner Brent Begolo, “I was happy to see it go caution free … I had some transmission problems so I don’t know how I would’ve handled restarts. With the weather so nice my grandfather Jeno is out tonight … I hope I can keep winning for him!”

Begolo, whose grandfather is a former Modified Point Champion and CAA Niagara Wall of Famer took over top spot from Randy Giroux on lap 4.

Begolo drove away to almost a straightaway lead right away.

The race to watch was the one for 2nd between Chris Watson and Josh Sliter. Watson would win that battle but had nothing for the leader. Begolo, Watson and Sliter were followed by Jeffrey May and Rob Misener.

“We had a great night … being able to get out front early and lead most of the race was exciting but also pretty stressful,” said 4 Cylinder Feature Winner Alex Riley, “having that many cautions can get annoying when you are the leader … but luckily I was able to get a good jump on the restarts.”

Father and son Shawn and Sam Iftody took the 15 lap Feature to the initial green flag with Shawn setting the pace until Alex Riley took control on lap 1.

The second caution slowing Riley came on lap 6 originally for a slowing Jay Moulton with the field quickly stopped with a red flag after Austyn Werstroh’s car developed a fire under the hood.

Two laps later Riley was again slowed when both Iftodys fell off the pace. Two more incidents slowing the field before the 5 laps to go mark. One final caution would set up a green white checkered finish with Riley holding off Cole Hardy, Jeremy Cooper, Vincent Pagnotta and Shawn Iftody.

“I’m having a lot of fun,” said 3 time V6 Feature Winner Adam Plazek, “Dad and I built this car … it’s been a real learning experience.”

John Couture set the pace at the start of the 12 lap Feature until Adam Plazek took over top spot on lap 2.

Two second generation racers would cause the only caution after Joe Bleich pitted for a flat tire and was able to rejoin the field. Tina Ronning’s misfortunes continued after she came to a stop with a broken tie rod.

On the restart it was Plazek out front ahead of Couture, Chris Mussat, Nick Hendricks and Bleich.

Merittville Speedway would like to thank all those that supported the annual KIDSRACE Night in support of the Canadian National Autism Foundation and to all the drivers and race teams that participated in Autograph Night.

Special Thanks as well to Westdale School Alumni Cody McPherson and Mat Williamson for their fund-raising efforts in the St. Catharines School Playground Fundraising efforts.

With the Vansickle Pet Valu & Groomingdale’s Enduro by Niagara College added to the event the Dave’s Auto & Speed Centre V6 Division will not be on the schedule. However the 358 Modifieds, Sportsman, Hoosier Stocks and Mod Lites will.