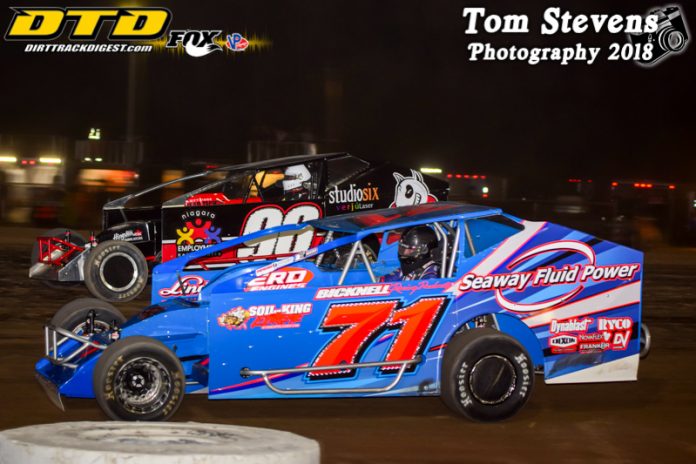 Begolo of Thorold would not only take home the 15 lap Vansickle Pet Valu & Groomindale’s Modified Lite Feature but would follow it up winning the 25 lap Event for in the David Chevrolet Sportsman Division.

It was also 2 Cool a night for Seaway Hose & Hydraulics as Begolo’s sponsor and boss Mike Bowman of St. Catharines would win his second S&W Service Centre 358 Modified Feature of 2018.


Saturday June 30th was also a celebration of the lives of former racer and long-time fan Paul Dortono, former Champion and CAA Niagara Wall of Famer Carl Game and World of Outlaws Sprint Car Driver Jason Johnson who passed away since the last event.

Paul Dortono’s son Anthony was Honourary Starter for the night and it was Marty deMoel who was first to take his green flag to start the 15 lap Modified Lite Feature. Unfortunately, deMoel would pull into the pit area the first time down the backstretch with Chris Perry the new leader.

By the third lap, Brent Begolo was in the runner up spot and two laps later began to close in on Perry.

Perry would battle back trying to get second back but in the closing laps, Winger was able to pull away slightly but couldn’t catch Begolo.

Begolo, Winger and Perry were followed by Randy Giroux and Ray Sliter Jr.

“He (Rob Knapp) gave me the top back,” said Brent Begolo after putting his car into Victory Lane for the second time later in the night after winning the Sportsman Feature, “That was the move I needed to win it.”

That move came as Begolo started lap 19 … passing Knapp on the outside at the start finish line after Knapp’s 2 Cool Automotive 2K had taken the lead one lap earlier.

Lee Mallory was first to lead until Begolo took control into Turn 2. Dave DiPietro would advance to second spot quite early and by lap 9 became the new leader. Caution the next lap would find Begolo back out in front until the challenge from Knapp.

The closing laps saw two late cautions set up a one lap dash to the checkered flag with Begolo maintaining a couple feet lead on Knapp. Paul Gaboury, Adam Leslie and newlywed James Friesen rounded out the top 5.

“That was some good hard racing,” after the caution … I didn’t know if I should stay up top or not though.”

The collision sent Wood into the front stretch wall and flipped the #38 several times. Wood was OK but his wounded racer wasn’t so lucky with a flare up quickly extinguished by the CAA Niagara Tow Truck Drivers and the Speedway’s Safety Team.

Wood had set the pace until a lap 13 caution when Bowman would take control on the restart.

Once racing resumed, Bowman opened up almost a ¼ lap lead on the field – almost the same margin he would drive away to in the final green flag run.

Bowman was followed by Chad Brachmann, Gary Lindberg, Ryan Susice and Pete Bicknell.
Chris Schneider and Kyle Pelrine led the starting field to the green flag of the 20 lap Hoosier Stock Feature before Pelrine took the lead the down the backstretch. Two drivers on the move in the early stages were Dave Bailey and Brad Sheehan who went three wide with Pelrine before Bailey took over top spot on lap 4.

With Bailey into lap traffic by lap 12 the defending Champion wasn’t slowed until the latter stages when Sheehan began closing in. By lap 15 Bailey’s lead was down to a couple car lengths when lap cars would come into the picture once again.

Sheehan would edge into the lead while maneuvering around the slower cars with Bailey giving it one last shot in the final laps.

Sheehan’s margin of victory was a couple feet over Bailey with Chris Hale third. Rob Murray and Brian Teeple rounded out the top 5.

“It was fun racing Jay (Moulton),” said Tony Kelly in 4 Cylinder Victory Lane, “there was lots of bent stuff in this car so I’ve been working hard fixing it all … I’m actually a little winded after this one.”

Jay Moulton was first to lead the 15 lap Feature but before the first lap was complete, an incident in Turn 4 left Cole Hardy unable to continue.

On the restart it was Moulton once again who was joined by Austyn Werstroh, Alex Riley and Tony Kelly with all 4 drivers breaking away from the field.

By lap 2 Kelly was into second and before a lap 6 caution, Moulton, Kelly and Riley were battling for top spot. Kelly would challenge the leader several times until the most serious effort came at the start finish line to start lap 13.

The two kept it pretty much side by side until Kelly edged Moulton for the win by at most a car length. Riley, Werstroh and Kyle Haynes closed out the Top 5.

Campbell would set the pace with action behind him three and four wide at times. The action included Mercer spinning his car on the backstretch and Campbell slowing off the pace of Jon MacWhirter who would become the new leader on lap 6.

Racing into increasing lap traffic in the latter stages, MacWhirter almost lost it himself but miraculously held top spot until the checkered flag and will now start the Vansickle Pet Valu & Groomindale’s 100 lap Enduro by Niagara College on Seaway Mall Motorized Mayhem Spectacular from the second starting spot on Sunday August 12th.

UPCOMING at Merrittville Speedway
Modern Corporation and Semenuck’s Esso will join forces to present quite a Bobcat of Hamilton Weekly Racing Series Event for both RACERS and RACE FANS Saturday July 7th!
Win your Feature and you will receive the following payout: $100 to Win V6, $300 to Win Mod Lites, $500 to Win 4 Cylinders, $500 to Win Hoosier Stocks, $1000 to Win Sportsman and $1500 to Win 358 Modified plus an additional Winner’s Purse Prize to one lucky driver in each division via draw … Attempt to qualify and you are entered. One lucky Race Fan will win a LIFETIME Grandstand Season Pass via a Free Draw as well!