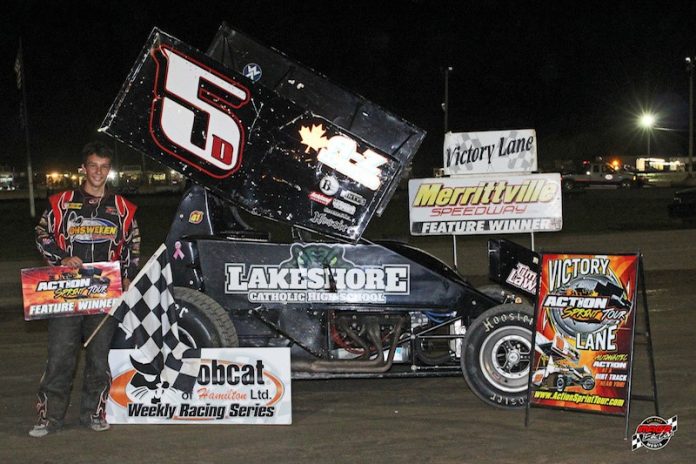 Dykstra started outside the front row with series point leader Jesse Costa on the pole for the 20-lap Feature. The two drivers shared the front row for the main event after turning down the chance to drop to 12th for a chance at a $500 winner’s bonus in the Durnin Motors Front Row Challenge.

Dykstra jumped out to the early advantage while fourth starting Ryan Hunsinger quickly jumped forward into second. Sixth starting Aaron Turkey raced quickly into a battle for third with Costa and the two drivers dueled in side-by-side for the first five laps.

The first of two cautions came on lap five when Corey Gruhl, who was making his first start with the tour, spun in turn two and was able to continue. On the restart, Turkey got past Hunsinger for second, but didn’t pull away. Simultaneously, the two drivers reeled in Dykstra by lap nine.

On lap 10, Hunsinger jumped back into second and was side-by-side for the lead with Dykstra on lap 11. A lap later, Turkey made it three-wide at the start-finish line for the top spot. Before lap 13 was completed, Turkey made the pass on Dykstra for the lead in turn two but had it erased as the caution waved for Trevor Young, who was turned at the top of turn three.

The final restart set the stage for a furious eight-lap finish to the race. On the restart, Turkey got past Dykstra to lead lap 13, but the 15-year-old retook the point the next lap. From there, he narrowly held off Hunsinger and Turkey to score his first win after the two drivers battled high and low in search of a road to victory, but came up just short.

“I think we just needed a little bit of lapped traffic,” Hunsinger said following the finish. “Under the last caution, I was just throwing everything I could at it and I put the wing a little too far back. It was a little too tight, but overall it was a fun race. I don’t mind finishing second in a race like that. It was side-by-side and it was a blast. Jacob did a really good job.”

For Turkey, it was his fourth top-five finish in five starts this season.

“The car was pretty good on the high and low side,” Turkey said. “I should have stayed on the high side. I hope (the fans) enjoyed the Feature. Three-wide for the lead, how about that?”

Dereck Lemyre raced to an impressive fourth-place finish while Costa battled back to finish fifth after falling as far back as sixth and retained the point lead in the process.

The Action Sprint Tour has now hit its official halfway point in the 2018 schedule. The series has seen three different winners in its five races. The seres returns to the track to start the second of its inaugural season on Friday, August 3 when it makes its second appearance at Ohsweken Speedway for Bradshaw Brothers Emergency Services Night. Race time is 7:30pm. For additional event information, visit www.ohswekenspeedway.ca. For more information on the Action Sprint Tour, including a full scheduled, points, purses and point fund, visit www.ActionSprintTour.com.
——————————
Action Sprint Tour powered by RaceRivalz.com Race Report
July 28, 2018
Merrittville Speedway – Thorold, Ontario, Canada
Total Entries – 20 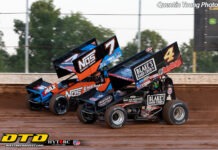 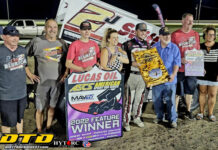 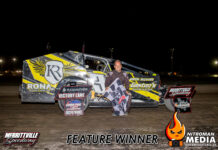