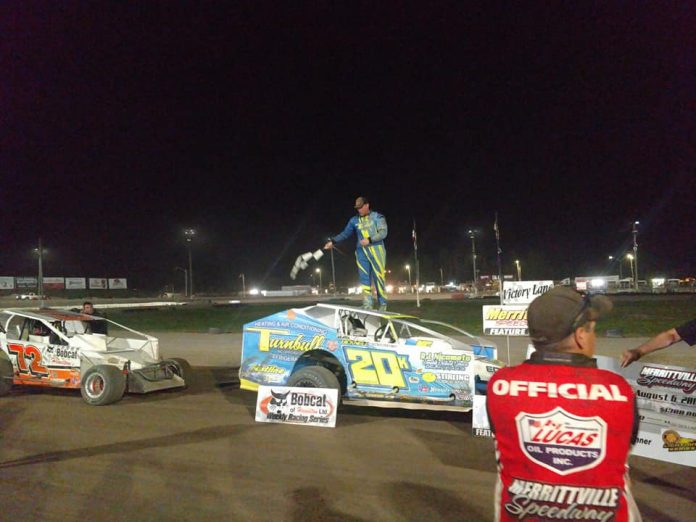 Brad Rouse and “Oh Henry” James Henry brought the 24-car starting field to the green flag for the 30-lap feature event with Rouse showing the way early. Rouse used his track knowledge well in the early stages as he opened-up the lead over Henry, James Michael Friesen, Rob Knapp, and Dave Conant.

The first yellow flag of the event would come out on lap eight as Rob Knapp tagged the front stretch wall. On the restart, sixth-place starter Kyle Inman went three-wide with Cody McPherson and Friesen to move into second and would then quickly reel in race leader Rouse. By lap 10, Inman would take the lead away by using the middle groove of the racetrack. Dave DiPietro spun in turn four to bring out the second and last caution of the night on lap 18. The final 12-laps saw Inman hold off numerous challenges from Friesen to score the victory at the Thorold, Ontario oval.

“I found something in the middle of the track off turn two and it stuck”, said Inman in victory lane. “I ended up following Kyle in the middle and learned a few things but we were close tonight”, stated runner-up finisher Friesen. “We had a good run tonight. Didn’t know where Kyle came from off the one restart but overall it was a good night”, commented third-place finisher Cody McPherson.


42-cars signed in pitside despite threatening weather around the Niagara Region.

The Samco Designs Low Cash Dash was won by Scott George over Cameron Tuttle in an exciting six-lap battle.