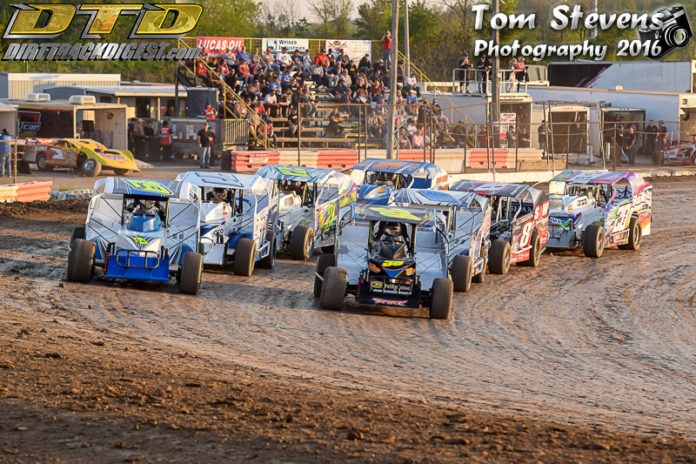 THOROLD, ONT – After Niagara Trailers Night Saturday August 18th – another piece of the 67th Season puzzle will be solved as the 2018 David Chevrolet King of the Crates Series Finale for the Welland Dealership that also sponsors the entire Sportsman Division will be the featured event.

In the first two events – Begolo has won both starting with May 26th’s CAA Niagara Night and then again on July 21sts Hingston Metal Fabricators Night.

Just live RVing … Racing is about family and friends.

When former racer Ken Walsh of St. Catharines got his start in what is now the David Chevrolet Sportsman Division – one family that helped him out was the Willards – especially Bill Willard Senior.

Walsh wanted to honor one of Merrittville’s pioneers and The Sterling Silvr Award is an annual award he created for the 1990 season and every year honors his memory.
2018 is the 28th edition of the Sterling Silvr Award and of all the previous winners – James Friesen, Justin Sharp, Brad Rouse, Bill’s great grandson Cody McPherson, Chad Chevalier and last year’s winner Rob Knapp are the only driver still regularly active in the division.

Beginning in the 1950’s the Willard family got its start in the local racing scene when Bill Willard Senior quickly became an accomplished car owner for drivers including Don Taylor, Bev MacTavish, Stan Friesen, George Winger and Terry Edwards while at the same time providing towing service through Willard & Son Towing which is now CAA Niagara.

Fast forward to the 1970’s and the cars Bill Sr. and his son Al would own and maintain would be those driven by the family’s third generation … Bill Willard and later his sister Tammy.

In recent years, Bill’s son BJ was a regular competitor in the Sportsman Division in the familiar #77 but has stepped away from the sport since moving to Eastern Ontario. BJ’s cousin Cody McPherson – son of Bill’s granddaughter Lori and her husband Guy is a former Sterling Silvr Winner as well as a former King of the Crates and overall Point Champion.

“Since it’s start … the Sterling Silver Trophy has been a great tradition for our Sportsman Teams that honors the memory of Bill Willard Sr,” said Merrittville’s Don Spiece, “ along with our final Autograph Night of the season … it all adds up to be a great night to be at the track.”

Whether it’s a Saturday Night at the track … at a special race or anywhere across North America … it can all start with the freedom, affordability, flexibility and opportunities associated with RVing.

Since 1972, Niagara Trailers of St. David’s Ontario has been owned and operated by the Petrie Family, has offered it’s valued customers a one-stop centre for their RV needs.
Doug Petrie Sr., President and founder of Niagara Trailers was one of the original recipients of the prestigious Camping Canada’s “Canadian Dealer of the Year”, awarded for his dedication input and service to the growth and improvement of the Canadian RV industry.

Visit Niagara Trailers at their 1224 York Road location in St. David’s or on line at http://www.niagaratrailers.com/

David Chevrolet offers an extensive inventory of genuine GM Performance parts and accessories including the GM Crate Engine that power each Sportsman. The GM Crate Engine is a bullet-proof 350-horsepower, 350-cubic-inch factory-sealed racing engine and is a tough combination of power and reliability, and it fits almost any racing budget.
At David Chevrolet you will find friendly, knowledgeable and professional staff who are guided by a relentless focus on superior customer service, honesty and delivering the highest value to our customers. David Chevrolet is committed to building relationships that will last generations.

David Chevrolet Corvette Buick GMC has been voted the #1 Dealer for new and used vehicles.

Visit David Chevrolet at 915 Niagara Street in Welland. On line at www.davidchev.com you can search new inventory, request quotes on service and repairs, body shop and parts.
Saturday August 18th’s Niagara Trailers Night begins when the Grandstands open at 5:30 with Showtime at 7 PM.