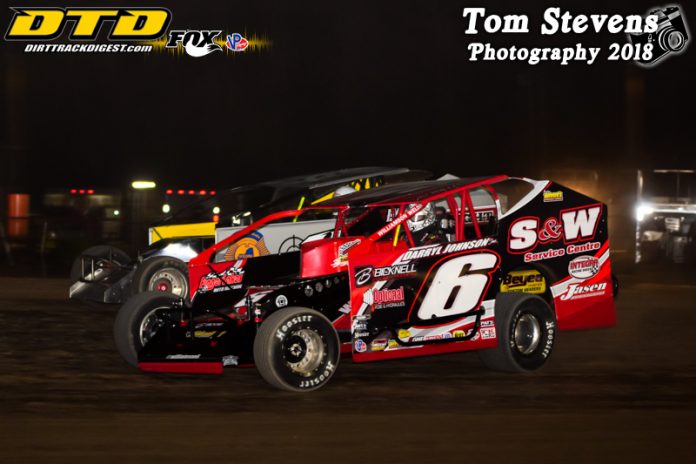 THOROLD, ONT – “With the tremendous effort Tracy (Palleschi) had put into the 2nd Annual Harry Sittler Memorial … nothing was going to stop us from getting the event in – not even a late afternoon rain,” said Merrittville owner Don Spiece, “thanks so much to her … thanks to the fans and teams that came out and thanks to the individuals and businesses that supported the St. Catharines Husky Travel Centre Driver Payout Night.”

Pallesci raised almost $10,000 which was put into the purse money.

First to lead the first 37 lap segment was Mike Bowman who right from the drop of the green drove away from the field. By lap 5, the St. Catharines driver had opened up almost a full straightaway lead.

By lap 12, Bowman had caught up to slower cars. By lap 30 – his lead had stretched to almost half a lap.

With the first caution slowing his pace on lap 32 – Bowman’s advantage of almost 7 seconds on runner up Mat Williamson was erased. Bowman, who had lapped almost half the field set the pace once again on the restart.

Willaimson would take over top spot in Turn 2 of lap 36 with the mandatory yellow flag turning red so a mandatory pit stop could take place along the front stretch.

Merrittville Announcer Steven Petty had some words with each driver as work was being done on their cars with the exception of Chad Brachmann who was one of the fastest cars in the first segment.
With Williamson in control when racing resumed – Brachmann continued his charge to the front taking on early leader Bowman by lap 40. A number of cars came together on lap 42 again slowing the pace. All were able to continue except for Gary Lindberg who would later return to the track.

Williamson would face two more restarts before lap 50 with Bowman slowing off the pace and heading pitside at the two/thirds mark of the special event.

Scott Wood would challenge Brachmann to start lap 54 with Williamson out front by some 10 car lengths with 20 laps to go.

10 laps later, Brachmann would pull side by side with Wood – eventually taking the runner up on lap 66. Meanwhile up front – Williamson’s advantage was now about a quarter lap.

At starter Randy Mallory’s checkered flag – Williamson stretched his lead to almost a straightaway ahead of Brachmann, Wood, Ryan Susice and Pete Bicknell.

Dave DiPietro and Cody McPherson led the starting field for the 30 lap Race of Champios 602 Sportsman Series Event to the initial green flag with DiPietro taking control of top spot right away.

DiPietro seemed to be on a mission and right away was off to a comfortable lead which was as much as a straightaway by lap 8.

DiPietro would soon come up on lap traffic and as it got heavier to lap 20 – there was no slowing down the second generation driver.

Still caution free, the race to watch was the one for the runner up spot with 2017 ROC 602 Sportsman Series Champion Chad Chevalier and Adam Leslie challenging McPherson.

Chevalier would eventually take second from McPherson on lap 24 but no one could take away DiPietro’s first career Merrittville win.

After 30 laps, DiPietro was followed by Chevalier, McPherson, Leslie and Jay Mallory.

With much of the starting field for the 25 lap Feature for the Street Stocks taking the offer from Hoosier Tire Canada of Free Admission from those who competed in the Monday August 6th Harveys of Port Colborne and Baron Roofing and Siding Civic Holiday Special – the race would be on to see who would take the final checkered flag of August.

Jason Fontaine would be first to lead the Event and two laps in Dave Bailey would land in the runner up spot.

Bailey would become the new leader just one lap later until a lap 5 caution slowed the field.

Bailey would set the pace on the restart and quickly drove away from the field. Brad Sheehan would lead the charge taking on Fontaine for the runner up spot. With Bailey safely out front – Rob Murray would join the challenge for second spot with the three front runners coming up on slower cars with 10 laps to go.

At the checkered flag, Bailey was followed by Murray who made a late race move to take second. Sheehan would finish third with Fontaine settling for fourth spot ahead of Dave Small.

Jay Moulton was first to lead the 20 lap Special Event for the Central Fabricating & Welding 4 Cylinders until Oliver Larocque the new leader the first time down the backstretch.

Cole Hardy would join in the battle for top spot with the front runners quickly going three wide. The same for action back in the pack.

Hardy would slow off the pace on lap 8 bringing out the first caution but the recently crowned Insta-Panels Duel on the Dirt Champion was able to rejoin the field.

With Moulton regaining the lead on the restart things settled down at the front but cars were still three and four wide through the field behind them.

By lap 15, Moulton and Larocque were less than a car length apart with former champion Rob Goulding making a rare start holding down third.

Moulton and Larocque went side by side just as a final caution on lap 16 put the battle for the lead on pause after Alex Riley slowed with a flat tire.

Moulton would hold off Larocque in the final green flag run with Tony Kelly passing Goulding for third. Daniel McKay rounded out the top 5.