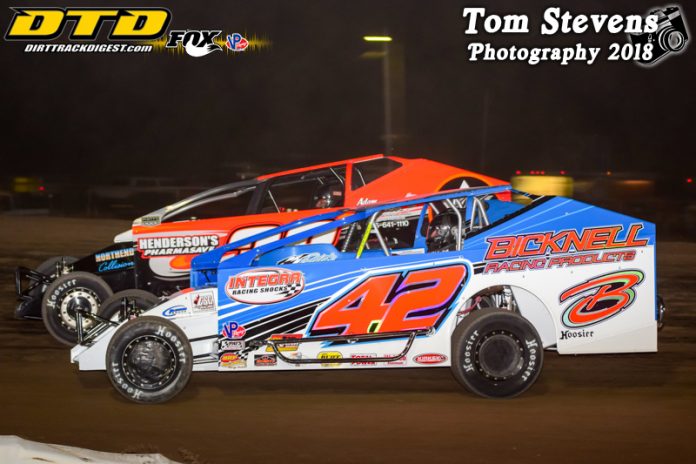 “Semenuk’s Esso Night has always hosted a great night for fans and racers,” informs Merrittville’s Don Spiece , “our hats off to the family and their customers for coming up with some great giveaways … we’ll be posting the purse additions prior to the weekend.!”

The Season Point Finale for the S&W Service Centre 358 Modifieds honors John Spencer who was an up and coming racer who passed away as a result of a racing accident in 1953 at the former Stamford Park in his home town of Niagara Falls.

Later that season and to coincide with the final points event of the season for the Modifieds, his crew created an Annual Memorial Award. Presented annually until the 1965 season, the award was lost until 1999 when former Merrittville owner Ken Kavanagh and his son – Reunion Committee Chairman Rick recovered it and restored it in time for presentation once again.

24 time Points Champion Pete Bicknell is also the defending John Spencer Memorial Winner as the event was rained out in 2017.

Before or after the races you have to know too that you can get your fill of Gas … Diesel or Propane at Semenuk’s Esso – located just south of the track at the corner of Merrittville Highway and Hwy 20 at Turner’s Corners.

Semenuk’s Esso is one of the last remaining Full Service Gas Stations in the area – featuring Gas, Diesel and Propane at competitive prices. Having the closest ATM to the Speedway – it’s the one stop to make on your way to the track … on the way home and during the week as they carry many convenience items.

The Semenuk’s Esso presentation of the 2018 67th Anniversary Championship Chase Finale begins when the gates open at 5:30 with Show Time at 7:00 PM.


Semenuk’s Esso Night begins when the Grandstands open at 5:30 with Show Time set for 7 PM.