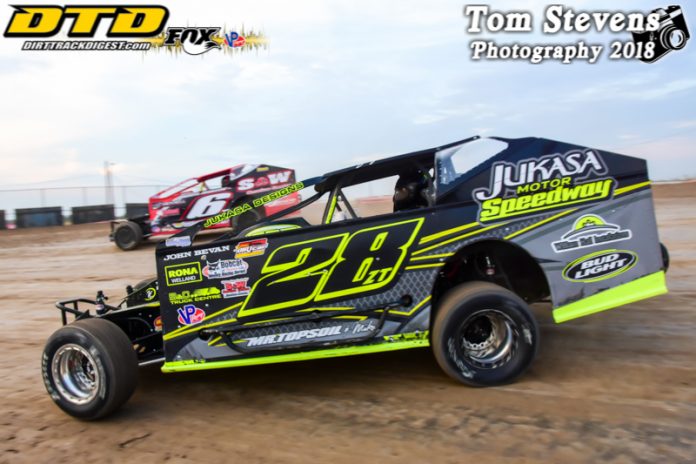 The 50 lap John Spencer Memorial was the final event of the night with Ridgeway’s Gary Lindberg taking his first win of the season and Mat Williamson of St. Catharines taking his second career S&W Service Centre 358 Modified Points Championship.

Rob Murray of St. Catharines would pick up the win and his 5th career Hoosier Stock Championship.

John Couture of Niagara Falls celebrated not only a Feature Win but the Points Title as well in the Dave’s Auto & Speed Centre V6 Division.

“That caution … I thought it was going to be over,” said Gary Lindberg after winning his first John Spencer Memorial, “I thought Mat (Williamson) would’ve taken advantage of the restarts.”

The caution Lindberg didn’t want to see came on lap 22 which erased a straightaway lead he had built up – a margin of more than three seconds. Scott Wood had set the pace at the start with Lindberg taking second by lap 3. Near disaster for both almost came on lap 5 after the two came together with neither losing any speed.

Two laps later Lindberg would take top spot from Wood and b y lap 13 – the leaders were already into slower cars.  Mat Williamson and Mike Bowman were on the move in the early stages with Williamson catching Wood by lap 20. The two would be side by side until Williamson took over second on lap 21.

Lindberg would resume control after the lap 22 caution and would drive away to a comfortable lead until lap 28 when the yellow slowed the field once again. Lindberg’s worries on the restart had to be the drivers behind him as well as the threat of rain as a very light rain began to appear.

Nothing would slow Lindberg however as he was able to run to a lead over Williamson once again. The race to watch was the one for third between Wood and Bowman. Bowman would take third for himself on lap 28.

One final caution on lap 44 wouldn’t slow Lindberg as on the restart the second generation driver was able to hold on to top spot once again ahead of 2018 Points Champion Williamson.

“it’s hard to win a title anywhere but it’s nice to get one so close to home … our focus has been on winning races … the championships will come if you do that,” said Williamson whose 10 win season was surely key to his second career points title.

Lindberg and Williamson were followed by Bowman, Ryan Susice and Chad Brachmann.

“This is just crazy,” said Dave DiPietro after winning his second Sportsman Feature in as many weeks, “I have struggled here for two and a half years … thanks to my crew and sponsors for all they do.”

Trevor Wright and Jay Mallory took the starting field to the initial green flag but a multicar incident behind them the first time through turn 1 led to a complete restart. Wright was in control once the green flag was once again displayed.

Two more early cautions would find Mallory in the lead after getting by Brent Begolo.  To the half way point Begolo would be challenged by DiPietro who would take over second on lap 13 – the same time Mallory would come up on lap traffic.

Mallory would be slowed once again for a lap 20 caution. Before action returned, James Friesen’s Championship hopes would start to slip as he took his car to the pits.

Mallory was back out front on the restart and quickly was challenged by DiPietro who would take top spot on lap 22.

DiPietro and Mallory were followed by Adam Leslie who made a late race charge in the Brad Rouse #18 after a carburetor fire in his own car earlier in the night. Brent Begolo and Cody McPherson would round out the top 5.

“This is just a dream come true,” said Brent Begolo after winning not only his first Sportsman Championship but successfully defending his Mod Lite Title of last season, “the night we parked both cars in Victory Lane … we set both titles as our goal!”

Rob Misener set the start of the 20 lap Mod Lite Feature before caution slowed the field with one lap complete. On the restart – the new leader was Tyler Winger.

Behind Winger there was plenty of three wide action through the field. When it settled down – Begolo was in the runner up spot. Begolo would become the new leader out of Turn 2 of lap 4.

By the halfway point, Begolo had pulled away to almost a straightaway lead ahead of Winger who was able to hold off a challenge from Randy Giroux.

Bill Podwinski set the early pace at the start of the 20 lap Hoosier Stock Feature until Kyle Pelrine took control by lap 3. Action behind the new leader was three and four wide and when it settled in – Rob Murray was in the runner up spot.

Murray would take on Pelrine and by lap 6 was the new leader.

Defending Champion Dave Bailey would follow Murray and by halfway the two had pulled away from the field. Brad Sheehan and Dave Small also were able to get by Pelrine.

Bailey would challenge Murray by lap 13 allowing Small and Sheehan to close in. The race for second soon went three wide for several laps.

Bailey was able to hold off Sheehan and Small and would get one last chance at Murray with a lap 19 incident setting up a one lap dash.

At the finish, Murray held off Bailey by a car length with Sheehan, Small and Pelrine as the top 5.

Anthony Kelly beat fellow front row starter Austyn Werstroh to the green flag of the 15 lap 4 Cylinder Feature.  By lap 5 the race to watch was behind the two former Tuesday Night Karters between Cole Hardy and Tony Kelly.

Caution on lap 9 saw Jay Moulton drop from the top 5 after losing his right rear tire.

Kelly and Werstroh went side by side on the restart until Kelly regained the lead.

Werstroh would now have Hardy pull alongside and by lap 13 it was Hardy in the runner up spot.

At the finish, Kelly was some 10 car lengths ahead of Hardy with Werstroh, Tony Kelly and Alex Riley as the top 5.

“This is just awesome … thanks Dad.” Said 5 time Feature Winner Anthony Kelly of his dad and fellow competitor Tony. “he does so much work on this car for me … thanks to everyone that helps!”

“I started coming to the races at 2 years of age with my dad,” said newly crowned 4 Cylinder Champion Cole Hardy, “to do it with one win … I can’t thank all my sponsors and my racing friends for all they do to keep me so consistent.”

Kevin Conley set the pace at the start of the 12 lap Feature for the Dave’s Auto & Speed Centre V6 Division and would continue to lead the way past half way.

Couture and Conley were followed by Adam Plazek, Colton Lane and James Small.

PIT NOTES: Merrittville Speedway would like to sincerely thank Semenuk’s Esso and all of their supporters that make the increased purse money and Fan Giveaways possible.

The David Chevrolet Sportsman will be featured in a 50 lap Super DIRTcar Series Event as will the Hoosier Stocks in a 50 lap Insta-Panels Duel on the Dirt Series Combined Event. Rounding out the show … the Vansickle Pet Valu & Groomingdale’s Mod Lites and the Dave’s Auto & Speed Centre V6 Divisions.. Gates open at 5:30pm with racing getting underway at 7pm.