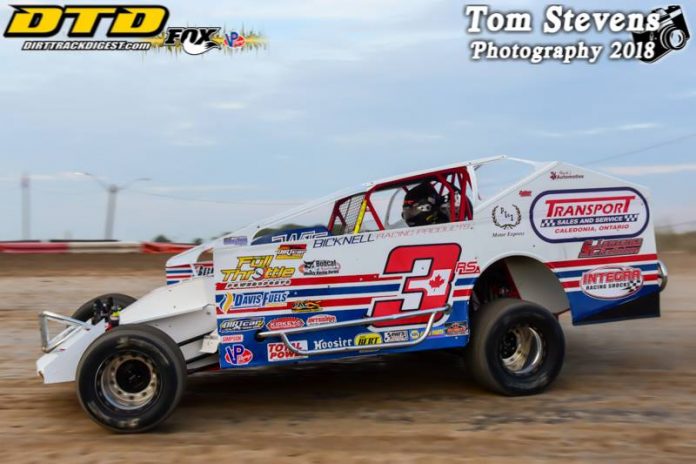 THOROLD, ONT – Merrittville Speedway hosted a driver meeting for the modified division on Tuesday evening with the discussion on what is taking place for the division for the 2019 campaign, the 68th season of racing at Merrittville.

“We will be DIRTcar sanctioned in 2019 for the Modifieds”, commented Merrittville Speedway owner Don Spiece. Merrittville was going to allow drivers that have a Wegner W-16 motor to run alcohol instead of racing fuel due to the high costs of racing fuel in Canada. However, for 2019, the rules for the Modifieds will be unchanged, including the fuel rule which will be using VP Racing Fuel, D113, D109, or D12.

“When the Super DIRTcar Series released their 2019 schedule and Merrittville was not on it, I received phone calls from sponsors, drivers and fans were wondering why”, Spiece explained. “I have been talking to DIRTcar and I can reassure everyone involved that a Big Block Modified Super DIRTcar Series race will take place on the traditional Civic Holiday Monday at Merrittville Speedway in 2019”.

2019 will be seeing drivers move up into the Modified division, as it has become more economically-friendly with the w16 option.


The meeting also introduced the new race med team for the 2019 season. “We wanted to focus more attention to the safety of the drivers and also to the fans”, commented Merrittville Speedway Race Director Tom Beales. Race Med will be run by Dustin Anderson and Patrick Quinn. Every Saturday night, there will be a fully-equipped safety truck and a fast response team to assess the situation on the track. A fire truck will also be on site with a fire suppression system along with the Jaws of Life. Anderson and Quinn each have over 10 years each of experience and will also have fully-trained EMTs and paramedics on site every race night. “We look forward to working with everyone at Merrittville”, said Patrick Quinn of Race Med. A new First Aid station will be constructed on the grandstand side to assist fans as well serves as the care center for those in the pit area.

Plans are starting to take shape for the 2019 season. It was announced at the banquet and was reiterated at the meeting that driver purses will increase for all divisions in 2019. By season’s end, the weekly race payout and the investment into the medical team would increase over $40,000. The Spiece family is continuing to invest into the facility and the drivers to make racing happen at Merrittville for another 68 years.

Look for the date for the registration meeting on the track’s social media accounts including Facebook (facebook.com/MerrittvilleSpeedway) and Twitter (@Merrittville) after the holiday season. The date will also be announced on www.merrittvillespeedway.com Merrittville Speedway season passes for 2019 are now available for purchase. For more information, contact Don Spiece at (905) 708-5534 to purchase today.