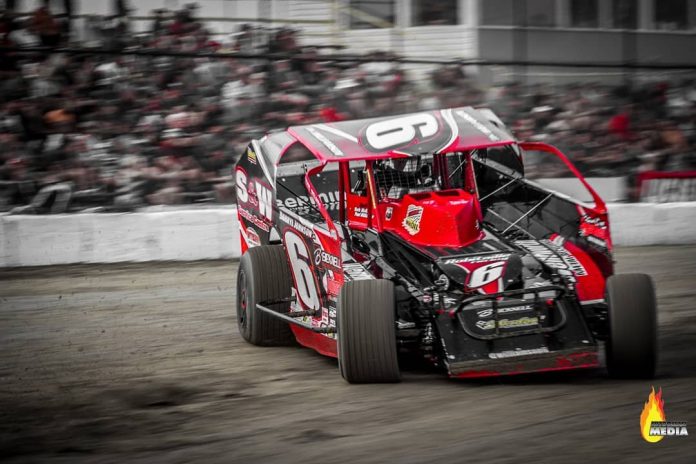 THOROLD, ONT – With the Merrittville Speedway car show at the Pen Centre in the rear-view mirror, ownership of the Speedway is pleased to announce the 2019 schedule, the 68th season of racing at the Thorold, Ontario speedplant.

A second car show will take place March 30-April 6 at the Seaway Mall in Welland, Ontario during mall hours. Make sure you pick up your schedules, so you do not miss a night of racing at “Canada’s longest running dirt track”. The on-track activity will begin on Saturday, April 13 for Test, Tune, and Inspection Day. Pit gates will swing open at 12 noon with on-track activity taking place beginning at 6 pm. Track officials will be on hand and the grandstands will be open for fans to check out the cars on track for the first time in 2019.

Garrison Automotive will present the annual Spring Sizzler on Saturday, April 20. The Southern Ontario Sprints will be joined by the 358 Modifieds, Sportsman, and 4 Cylinders. That day will also see an Easter Egg Hunt for the kids with a bike giveaway. Over 30 bikes and counting will be given away to the kids as part of the Easter Egg Hunt. April 27th will be the Bobcat of Hamilton Weekly Racing Series 68th Season Opener for the S&W Service Centre 358 Modifieds, David Chevrolet DIRTcar Sportsman, Hoosier Stocks, RONA Doidge Building Centres Ltd Mod Lites, Central Fabricating 4 Cylinders, and the Dave’s Auto and Speed Centre V6’s.

The month of May will open with a full show featuring the first home race for the Insta Panels Duel on the Dirt for the Hoosier Stocks as Peters Excavating presents the program. May 11th will see 2cool Automotive present the Brian Stevens Memorial featuring a $444.00 pole dash challenge, and race one for the TMR Racing 4 Cylinder Triple Crown, as part of the Duel on the Dirt for the 4 Cylinders. That night will also feature the go-kart display and exhibition. May 18, the Pen Centre presents the program and the first Tim Hortons Enduro Qualifier accelerated by JC Auto. Victoria Day Monday, May 20, Ken Schrader will be on hand to race with his UMP Modified. The Action Sprint Tour will be on hand for their first visit of the season plus a School Bus Race presented by Zavitz Financial Strategies and ZFS Benefit Solutions. CAA Niagara will present the May 25th racing program, highlighted by race one of the David Chevrolet King of the Crates for the Sportsman.


The month of June kicks off with Autograph Night presented by Young McNamara Barristors & Solicitors. The night’s action will be in support of Autism Ontario Niagara Region. The very next day, Sunday, June 2, Merrittville Speedway will be hosting Ontario’s first ever School Bus Demolition Derby plus a $2500 to win 4 Cylinder Demolition Derby, Powerwheels Demo, and the first ever Redneck Burnout competition presented by Thorold Auto Parts. Wreckfest 2019 will begin at 1 pm sharp. Saturday night racing returns on June 8 as Pro Battery presents race two of the TMR Racing Triple Crown and the best appearing dog contest. The following week, the Hoosier Stocks will have their second home race for the Duel on the Dirt plus the Race T-Shirt contest presented by Gaston’s Auto Sales on June 15. Comedian hypnotist Mark Irish will be doing a show in the turn one bar on Friday, June 21st. The following day, Country 89 presents the Gary Cunningham Memorial for the Southern Ontario Sprints on $1 hot dog night and the second qualifier for the Tim Hortons Enduro accelerated by JC Auto. The end of the month will feature a full card sponsored by Submission Subs.

Canada Day Monday, Merrittville is back in action as Graybar Electrical & Schneider Electric presents the Action Sprint Tour. The Northeast Late Model Alliance will be having their first race at Merrittville, brought to you by Zanchin Truck and Trailer, plus the Race of Champions Dirt 602 Sportsman Series. It will be the combined race for the Duel on the Dirt for Hoosier Stocks and a school bus race. Plus, Canada Day Fireworks! Modern Corporation presents the annual Truckers Show and Shine on July 6. July 13th will be Nostalgia Night, being featured by the Wall of Fame Inductions and the Jerry Winger Memorial for the Modifieds. Minor Sports Team night on July 20 will feature the second King of the Crates race for the Sportsman sponsored by the Seaway Mall plus the third and final qualifier for the Tim Hortons Enduro. The month will end on July 27th as Ideal Supply and Schneider Electric presents the Action Sprint Tour plus the TMR Racing Triple Crown finale for the 4 Cylinders.

August comes in as Exclusive Imprint presents the show with the appearance by the Thunder on the Dirt Vintage Series on Saturday, August 3rd to kick-off Civic Holiday Weekend. Monday, August 5, Bobcat of Hamilton and Baron Roofing presents the Big Block Modified Super DIRTcar Series 100, the BEI Lightning Series for Sportsman $1,000 to win event and the $1,000 to win Insta Panels Duel on the Dirt combined race for the 4 Cylinders. Come early for the John Michaels Banquet Centre Chicken BBQ. Saturday, August 10, Niagara Employment Help Centre presents with Bill Willard Sr Sterling Silver Sportsman event plus Kids Box Car Races. The following week, Niagara Trailers presents the $1000 to win King of the Crates finale plus Autograph Night! Fastek Power Tools and Fasteners will present a full card on August 24. Semenuk’s Esso will present the 68th Season Championship for all classes, headlined by the 50-lap John Spencer Memorial for the Modifieds.

The month of September will see the Southern Ontario Sprints return for their Season Championship event, plus the annual visit by the Sportsman Super DIRTcar Series, Mod Lites, and $500 to win Hoosier Stock special on September 7. Sunday, September 8, Tim Hortons presents the $5,000 to win, 100-lap Enduro accelerated by JC Auto, Monster Trucks, the 3rd annual Charity School Bus Race, V6 race, an $1,000 to win Demolition Derby and more. Showtime will be at 1 pm.

Merrittville Speedway is continuing to upgrade the facility on both sides of the racetrack to ensure another successful 68 years of operation. From the introduction of RACE MED team, increased purses, pristine track conditions, new LED lighting, Merrittville is a crown jewel of racing in Southern Ontario.