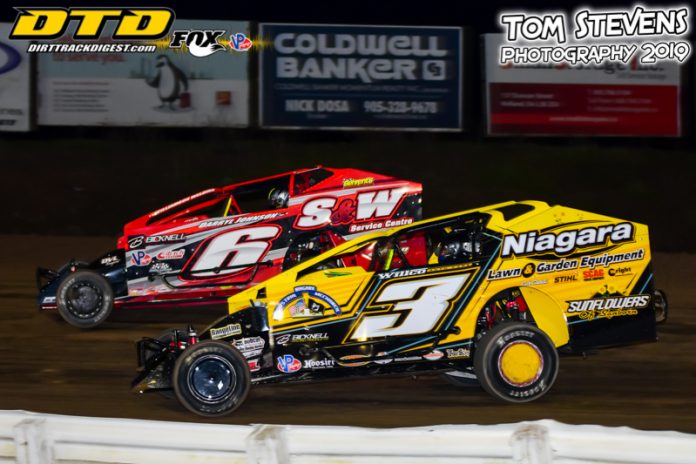 THOROLD, ONT – Defending S&W Service Centre 358 Modified Champion Mat Williamson from St. Catharines, Ontario won his second feature of the young season on Saturday night as the Pen Centre presented the racing program at Merrittville Speedway. Also collecting his second checkered flag of the season was Ridgeway’s Josh Sliter in the Doidge Building Centre’s Mod Lites. Winning their first features of the season were Justin Sharp from St. Catharines in the David Chevrolet DIRTcar Sportsman, Jason Fontaine from Port Colborne in the Hoosier Stocks, and Welland’s Tyler Lafantaisie in the Central Fabricating 4 Cylinders. Joe Bleich was victorious in the first Tim Hortons Enduro of the season accelerated by JC Auto.

Twenty-One small block DIRTcar 358 Modifieds took the green flag for the 35-lap feature for the S&W Service Centre Modifieds. Tim Jones took the lead away from Shayne Pierce early on and would appear to be on cruise control. Until reigning track champion, Mat Williamson worked his way around Ryan Susice to take over second. Williamson would look underneath Jones to take the lead and Williamson would go on to score his second win of the season. Jones would settle for second. “Mr. Small Block” Pete Bicknell, after going to the rear of the field on lap one, drove back through the field to finish third.

Justin Sharp won his first feature of the season in the David Chevrolet DIRTcar Sportsman. Sharp held off the challenges from Ryan Ferri, James Michael Friesen and Brad Rouse. Sharp took the lead for good exiting turn four to hold off Ferri to score the win.
The Hoosier Stocks feature started with a bang. Fontaine would take the lead from Murray as Murray slowed on top of the back straightaway. Fontaine would go on to score his first feature win of the season.

Austyn Werstroh, Jeremy Cooper, and Tyler Lafantaisie all had turns at the lead in the main event for the Central Fabricating 4 Cylinders. In the end, Lafantaisie used the bottom of the racetrack to pick up the win, his first of the season.

Past divisional champion Jeffery May had the lead in the main event for Doidge Building Centre’s Mod Lites when Josh Sliter went three-wide with Randy Giroux and Chris Watson to catch up to May. Sliter went to the outside of the track to take the lead away from May. Sliter would go on to take his second straight feature win.

NEWS AND NOTES: 71 bikes were given away to lucky young race fans in the bike giveaway. 92 cars signed in pitside to kick off Victoria Day holiday weekend.
Victoria Day Monday, the UMP Modifieds featuring Ken Schrader will be on hand sponsored by Zavitz Financial Strategies and ZFS Benefit Solutions. The Action Sprint Tour will make their first stop of the season plus Sportsman, Hoosier Stocks, V6’s and a School Bus Race. Pit gates will open at 4, with grandstands at 5:30 and race time is scheduled for 7 pm.
Saturday night racing returns on May 25 as CAA Niagara presents the first race of the King of the Crates for the Sportsman plus Modifieds, Mod Lites, 4 Cylinders, and V6’s.