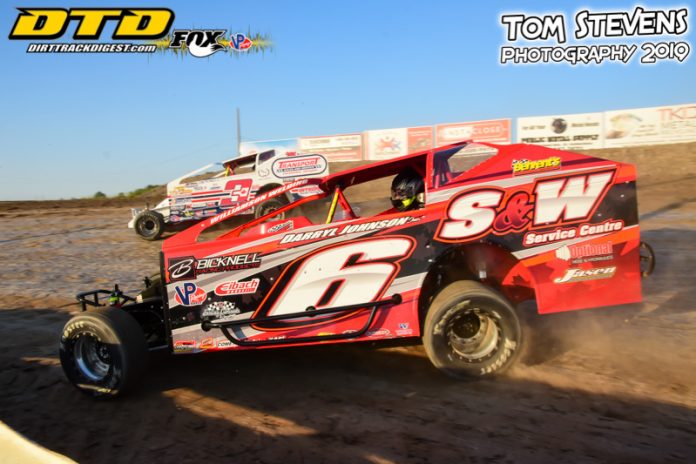 Rob Knapp and Dalton Slack brought the Modifieds to the green flag for their 35-lap feature with Knapp showing the way over Slack with Scott Wood, Mike Bowman, and Ryan Susice racing in the top five. Slack would take the lead away on lap six, just before the races first caution of the night. Off a lap seven restart, Knapp would regain the lead as Bowman, Mat Williamson, and Pete Bicknell raced in the top five. Williamson moved into third on lap ten. Williamson would battle with Knapp with Williamson taking the lead on lap 15. Rob Knapp spun in turn four to bring out the caution as Tim Jones and Shayne Pierce had nowhere to go on lap 28. Off the restart, Williamson and Lindberg battled for the lead with Lindberg taking the lead on the outside of turn four with five laps remaining. Off a late-race restart, Williamson would regain the lead and would go on to score the win, his fourth of the season.

Jake Brown and Steve Lyons brought the SOS to the green flag for their 25-lap A-Main with Jake Brown showing the way. Dylan Westbrook got around Cole McDonald to move into third on lap two and would go after Lyons. Westbrook would then use the slide-job to move into second place and then would take the lead away as the leaders hit lap traffic on lap seven. Westbrook would continue to stretch the lead over Jake Brown and Steve Lyons was being pressured by Mitch Brown for third place. Brown would move into third on lap 18 as Ryan Turner would move into fourth after passing Lyons on lap 19. Westbrook would go on to score the win with Ryan Turner and Mitch Brown completing the top three.

Zach Bleich and Bryce Richardson brought the Hoosier Stocks to the green flag for their 20-lap feature event with Richardson showing the way. Richardson would get loose exiting turn four, giving the lead to Rob Murray and Brad Sheehan.  Dave Bailey went up in smoke to bring out the caution on lap five. Murray would start to pull away from the field after the restart and Murray would go on to score the win, his third of the season.

Garnet Wilson and Dan McKay were on the front row for the Central Fabricating 4 Cylinders with Jay Moulton taking the lead away early on. Moulton would show the way with Tyler Lafantaisie giving chase. Off a mid-race restart, Austyn Werstroh worked his way through the field and would enter the top five, battling with Leroy Buscumb. Moulton would go on to score the win, holding off Rob Goulding by .14 thousandths of a second.

NEWS AND NOTES: $1 Hotdog night was once again a huge success. 99 cars signed in pitside for the racing program.

Next up on the schedule is the Canada Day Weekend doubleheader. Saturday, June 29, Submission Subs presents a full Bobcat of Hamilton Weekly Racing Series program. Pit gates will open at 5, with grandstands at 5:30 and race time is scheduled for 7 pm.

Canada Day July 1, Graybar Electrical and Schneider Electric presents Fireworks! Racing action will feature the Race of Champions Dirt 602 Sportsman Series, the Action Sprint Tour presented by Race Rivalz.com and the Northeast Late Model Alliance for RUSH Crate Late Models presented by Zanchin Truck and Trailer. The Hoosier Stocks will also have their Insta Panels Duel on the Dirt event. A school bus race will end the racing action before a gigantic Fireworks display lights up the sky. Showtime is at 7 pm.