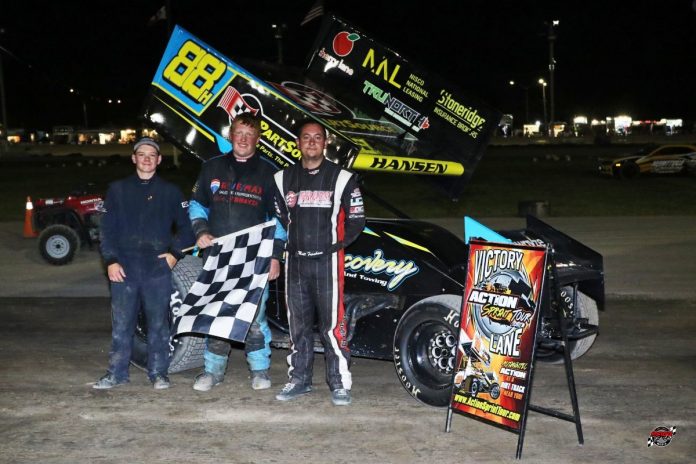 THOROLD, ONT – Josh Hansen wasted no time driving from his fourth starting spot to the lead on lap two and paced the final 19 laps to score his second Action Sprint Tour powered by RaceRivalz.com win of the season in the Canada Day showdown at Merrittville Speedway on July 1.

“The track was perfect tonight,” Hansen said in Victory Lane. “It was smooth on the top and smooth on the bottom. I really enjoyed it.”

Paul Klager had the pole for the 20-lap Feature with Tonawanda, NY native Matt Farnham starting outside the front row. Farnham quickly darted to the lead on the opening lap while fourth-starting Josh Hansen quickly raced to second on the opening lap while Klager slipped to third. On the second lap, Hansen continued his torrid pace and took the lead from Farnham with the high line off turn two before dropping to the bottom in turn three.

Hansen opened a lead of 1.5 seconds before working into lapped traffic on lap seven. That lead was quickly eroded as Hansen was held up by a handful of slower cars and resulted in a side-by-side battle for the lead with Farnham in turns three and four. Then, on lap nine Liam Martin came out of nowhere and drove past Farnham for second.

Just after the halfway point was clicked off on the scoreboard, Dave McKnight Jr. brought out the first yellow of the race when he spun in turn one. He re-fired his No.70MM and re-joined the field. On the ensuing single-file restart, Hansen maintained his lead, but wasn’t able to drive away from Martin and Farnham until he worked into lapped traffic again on lap 15.

The leaders ran those five laps in single-file formation with the top runners preferring the outside lane in turns one and two before dropping to the bottom in turns three and four. In the midst of the action, Klager was able to use the outside lane to move past Steven Beckett for fifth, a move not many were able to make.

Hansen went largely unchallenged through traffic as Martin and Farnham were locked into their battle for second. The battle was halted by the second and final caution on lap 17 when Noelle Teal looped her No.14 in turn four.

The second and final restart gave Hansen the clean air he needed to maintain his lead for the final three laps and to hold off a strong last-ditch effort from Martin. Farnham maintained the third spot to complete the podium while Port Colborne, Ont. native Jacob Dykstra and Klager rounded out the top-five. Farnham, Jerry Hill and Klager won their qualifying heats to start the night.