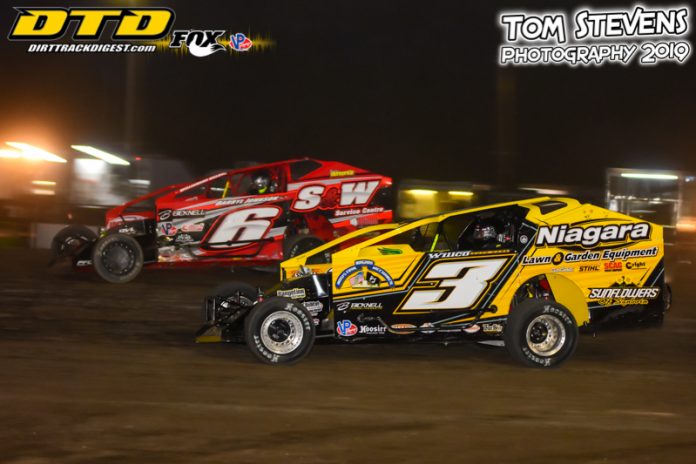 Mike Bowman and Gary Lindberg were on the front row for the Jerry Winger Memorial 50 for the S&W Service Centre Modifieds with Lindberg jumping into the lead. Lindberg and Bowman would take off from the field as Rob Knapp, Tyler Willard, and Todd Gordon raced in the top five as Ryan Susice ran sixth after starting 12th on the grid. Mat Williamson started his progress early as well as he ran eighth and challenged Scott Wood for seventh on lap eight. Susice would enter the top five after passing Tyler Willard and would challenge Knapp for third on lap 12, just as the leaders encountered lap traffic. Dalton Slack spun in turn three to bring out the races first caution on lap 17. On the restart, Lindberg and Bowman continued to battle for the lead as Ryan Susice took third away from Knapp as Williamson took over fifth from Willard. Lindberg would continue to lead at the halfway mark over Bowman, Susice, Williamson, and Knapp with Tim Jones running in sixth place. Williamson and Susice would battle for third place with Williamson moving into the third position on lap 29 and would start to go after Bowman and Lindberg up front. Freddie Carleton spun in turn four to set up a 7-lap shootout. Bowman would race hard with Lindberg to take the lead on lap 44, just before a Tom Neale spin would bunch the field back up. On the restart, Mat Williamson would take the lead and would pull away to score the feature win.

Ryan Ferri took the lead from his outside front row starting spot in the 25-lap feature for the David Chevrolet DIRTcar Sportsman. After a Robbie Johnston spin on lap six that brought out the caution, Ferri would once again jump into the lead over Dave DiPietro. Ferri would lead as Paul Gaboury would take second away following a lap 10 restart. Brad Rouse and Brent Begolo moved up through the field and both would enter the top five and would challenge the leaders. Gaboury and Rouse would battle with race leader Ryan Ferri with seven laps remaining. Rouse would use the inside lane to take the lead away from Ferri with four laps remaining and would pull away to score his third win of the season.

Anthony Kelly and Jeremy Cooper brought the Central Fabricating 4 Cylinders to the green flag for their 15-lap feature with Kelly showing the way. Fourth place starter Kyle Rothwell would take the lead away and would start to pull away from Kelly as Cooper was battling with Tyler Lafantaisie, Austyn Werstroh, Cole Hardy, Kyle Haynes, Tony Kelly, and Jay Moulton. Rothwell’s lead would come to an end on lap 12 with the right rear tire falling off the car. On the restart, Anthony Kelly would inherit the lead as Tyler Lafantaisie would pressure Kelly for the lead. Lafantaisie would take the lead on the final lap to score the win. Kyle Haynes, Tony Kelly, and Jay Moulton would complete the top five.

Kyle Irving and JJ MacDonald were on the front row for the Dave’s Auto and Speed Centre V6’s with Irving leading the opening lap. John Couture would take the lead away from Colton Lane on lap three and would pull away from the field. After a mid-race caution bunched the field back up, Kevin Conley started to apply the pressure to Couture, but it was Couture being able to pick up his third win of the season.

NEWS AND NOTES:  83 cars signed in pitside for the racing program. Over 200 alumni and guests were treated to the pre-race catered dinner before the Wall of Fame induction ceremony. Co-Announcer Jonathan Howe served as Master of Ceremonies. The class of 2019 include Late Model pilot Bob Webster, media member Bruce Bonham, long time racing supporters The Semenuk family and longtime scorer and current head scorer at New Humberstone Speedway Colleen Curvin.

Racing action continues Saturday, July 20 as the Seaway Mall presents race #2 of the David Chevrolet King of the Crates for DIRTcar Sportsman plus 358 Modifieds, Hoosier Stocks, Mod Lites, 4 Cylinders plus the Tim Hortons Enduro qualifier number 3 accelerated by JC Auto. It is also Minor Sports Team night with all minors in uniform admitted FREE! Pit gates will open at 5 pm and grandstands will open at 5:30 pm. Fans will have the opportunity to take Fan Tram Rides during intermission on the Bellinger Electric Inc. BEI Lightning Series Fan Tram.