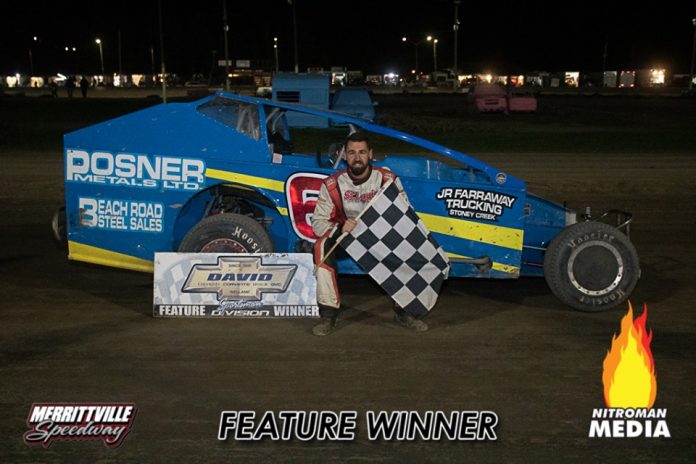 Dan Ferguson and Cody McPherson brought the David Chevrolet DIRTcar Sportsman to the green flag for race number two of the Western Region for the Sportsman Super DIRTcar Series with Ferguson showing the way over Cody McPherson with Justin Sharp, Chad Chevalier and Greg Panunte racing inside the top five. McPherson would take the lead on lap four with Sharp also moving up into the runner up spot. Ryan Ferri spun in turn two to bring out the races first caution on lap 10. On the restart, McPherson would continue to show the way with Sharp, Panunte, James Michael Friesen, and Chad Chevalier racing in the top five. Sharp would take the lead from McPherson on lap 17 with McPherson batting back for the top spot. McPherson would regain the lead midway through the event and would go on to score the victory. Brad Rouse would finish in second with James Michael Friesen rounding out the podium. Race number three of the “Honeymoon Tour” will take place on Sunday, September 8 at Humberstone Speedway.

Dave Bailey would take off from his pole position to take the lead early in the Hoosier Stocks feature. Jason Fontaine would run in second with Bailey well in command of the field. Matt Wilson spun, in turn, two on lap 14 to bring out the first caution. On the restart, Steve Shaw would take the lead away from Bailey as Rob Murray and Fontaine raced for third. Bailey would regain the lead from Shaw coming for two to go. Bailey would go on to score the win, his fourth of the season.

Jeffery May would take advantage of his front-row starting spot to take the lead at the drop of the green for the Doidge Building Centres Mod Lites. Dave Cornish spun in turn two to bring out the races first caution with five laps to go. On the restart, Josh Sliter would move into second and would go after race leader Jeffery May. May would hold off Sliter by .016 to score the feature win.

NEWS AND NOTES:   82 cars signed in pitside for the racing action. The speedway would like to welcome the groups associated with the Merrittville Speedway Gives Back Program.

Sunday, September 8, Tim Hortons presents the $5,000 to win, 100 lap Enduro accelerated by JC Auto plus Monster Trucks, V6 race, Side By Side, Figure 8, Backwards Race, a $1000 to win Demolition Derby and for the third season, a School Bus Race! Pit gates on Sunday will open at 9 am with front gates opening at 11:00 am and showtime is at 1 pm.