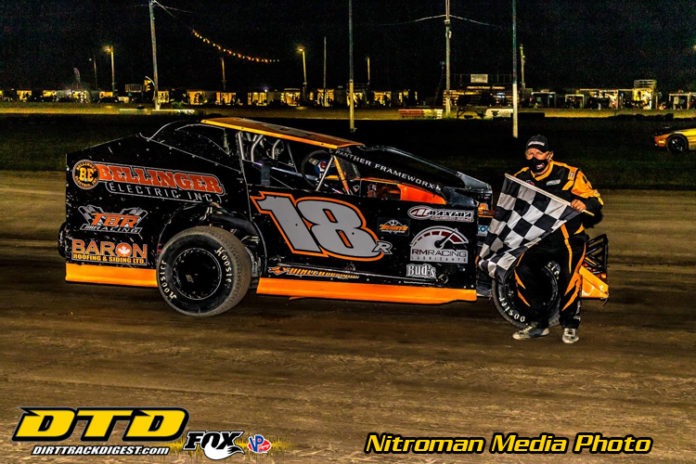 “The Mongrel” Jay Mallory and defending track champion Brad Rouse brought the RM Racing Lubricants/Rick’s Delivery DIRTcar Sportsman to the green flag with Rouse taking the lead as Greg Panunte battled with Chad Chevalier for third place. With Rouse and Mallory showing the way, the battle for third continued to heat up as Panunte led Chevalier, Brent Begolo, James Friesen and Cody McPherson Begolo would work his way around Chevalier to take over fourth place and would then challenge Panunte. Using lap traffic, Chevalier would reel back in Begolo as well as catching Panunte and Mallory, making it a four-car battle for second. Chevalier would take over second with less than five laps remaining. Rouse would score the win. Chevalier, Mallory, Begolo and Cody McPherson completed the top five. Competitors in the Sportsman division received DIRTcar Hoosier Racing Tire Weekly Points. The winner of the main event received a case of Maxima Full Synthetic 10w30 from RM Racing Lubricants, the Master Distributor for Maxima Racing Oil’s Performance Auto Division in Canada. “The good starting position helped us tonight that’s for sure”, commented race winner Brad Rouse. “It’s tough not being able to race in the states yet but we have some tough competition here and we’re having fun racing in Canada” Rouse added. Second place finisher Chad Chevalier commented “I’m pleased with second. We couldn’t run the bottom, so we had to run where everyone else wasn’t and we made some gains on the top.” “I’m happy with a third tonight with the new car,” said Jay Mallory. “Chad (Chevalier) got me in lap traffic but we did a good job on the first night”, Mallory continued.

Jake Dykstra and Darren Dryden were on the front row for the first Action Sprint Tour event of the 2020 season with Dykstra showing the way. After a couple of early cautions slowed the pace down, Dykstra, Dryden, and Mike Bowman started to pull away from the field. Ryan Hunsinger and Cody Smith brought out the caution to bunch the field back up again. Bowman would battle with Dryden for second place for several laps. Bowman would take over the second position with six laps remaining. Bowman would be on the tail tank of Dykstra on the lap 19 restart and would look to the inside of Dykstra with five laps remaining. Allan Downey would pass Dryden to take over third place with four laps remaining. Downey would continue his trek towards the front and would go to the outside to pass Bowman to take over second with two laps remaining. Jacob Dykstra would hold off Downey to bring home the win. Mike Bowman would finish in third to complete the podium. “I’ve felt like I’ve had millions of laps here at Merrittville and its always cool to win here” stated Dykstra in victory lane. “I’m speechless with a second-place finish and I’m pumped about my first top-five finish”, commented runner up finisher Allan Downey. Third place finisher Mike Bowman said “I had a lot of fun. Can’t thank Terry Baker and his crew enough for letting me have fun tonight.”

Jay Moulton and Dylan Llord brought the 28-car Central Fabricating/Glo & Go Tanning 4 Cylinder Mini Stocks to the green flag for their feature event with Moulton taking the lead. Leroy Buscumb battled with Dylan Llord for the runner up position with Wayde Thorne, Tyler Lafantaisie and Craig Vlasic racing in the top six. Lafantaisie would next challenge Llord for second place, with Lafantaisie taking over the position. Moulton would continue to show the way over Lafantaisie and Llord. Moulton would lead every lap to score the win over Lafantaisie and Llord. “It feels good to be back in victory lane after winning the last race in 2019 and now the first race in 2020”, stated race winner Jay Moulton.