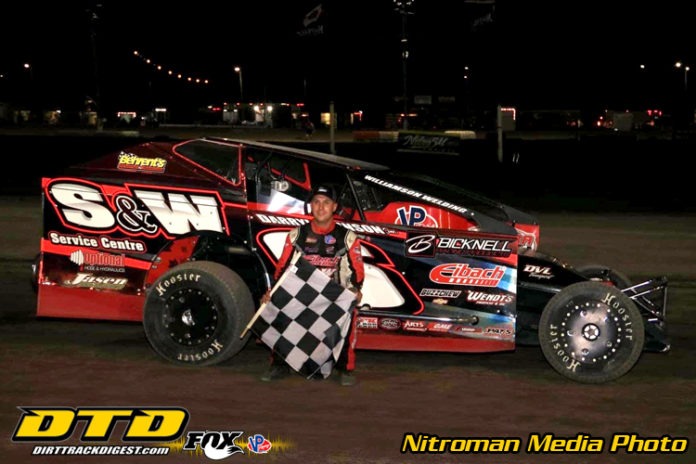 THOROLD, ON –  2018 divisional champion and reigning Big Block Modified Super DIRTcar Series champion Mat Williamson from St. Catharines, Ontario scored the win in the S&W Service Centre 358 Modifieds as part of Operation Green Flag at the Merrittville Speedway on Sunday night. Jordan Poirier from Saint-Mathieu-de-Beloeil, Quebec took home the checkered flag in the 360 Sprint Car feature. Defending Hoosier Stock champion Rob Murray from St. Catharines scored the win in the Hoosier Stock main event. The event was streamed LIVE on GForceTV.net and will be broadcasted nationally on REVTV Canada on a tape delay. Showings on REVTV will be announced on social media as soon as possible.

Dalton Slack and Rob Knapp brought the S&W Service Centre 358 Modifieds to the green flag for their 40-lap feature with Slack showing the way over Fred Carleton and Mat Williamson. Mike Bowman would take over fourth, just as Williamson moved into second and would challenge Slack for the lead. Williamson would pull the slider to take the lead away from Slack on lap nine and would quickly check out on the field. Bowman would close the gap on the battle for second between Slack and Carleton as Tim Jones raced in fifth place. The caution would come out at the races’ halfway mark as Corey Gruhl spun, in turn, two, erasing Williamson’s 6.8 second lead over the rest of the field. Fred Carleton would take second away from Slack off the restart, as Gary Lindberg entered the top five and would go after Bowman for fourth. Tim Jones came to a stop, in turn, two on lap 25 to bring out the yellow. Williamson would once again take command of the field as Carleton, Slack, Bowman, and Lindberg all battled for position. Bowman would pass Carleton for second on lap 31 and would start to go after Williamson. Just one lap later, Gary Lindberg would take over third place. Lindberg would bring out the caution with less than five laps remaining as he overdrove turns three and four. The late-race restart would see Bowman and Williamson share the front row with Bowman challenging Williamson for the lead. Steve Bernier would move into third. Williamson would score the win. Bowman, Steve Bernier, Mark D’llario and Tyler Willard would complete the top five.

Ryan Turner and Cory Turner led the field of 360 Sprint Cars to the green flag with Ryan Turner in the lead over his older brother Cory. The red flag came out for Mack DeMan and Shawn Sliter as they got collected into the turn one wall. Both drivers climbed out of their racecars under their own power. Jim Huppenen challenged Cory Turner for second as Jordan Poirier started to reel in the battle for the runner-up position. Huppenen would take second away on lap 12 while working lap traffic. Jordan Poirier would take over third and would quickly reel in the battle for the lead. Huppunen would take the lead away on lap 15, as Poirier would take over second from Ryan Turner. The caution would come out on lap 21 as Aaron Turkey came to a stop in turn three. On the restart, Huppenen would take off as Poirier would give chase. The duo would exchange slide jobs with Poirier taking the lead. Ryan Turner spun in turn four to bring out the caution on lap 22. Poirier would take off on the restart and would go on to score his first career win at Merrittville. Jim Huppenen, Cory Turner, Jake Brown and Jamie Turner would complete the top five.

Mike Thorne and Donny Lampman were on the front row for the Hoosier Stocks feature with fourth-place starter Rob Murray quickly taking over the lead with Chris Hale and Justin Ramsay giving chase. Andrew Hennessey worked his way into the top six racing with Ken Sargent and outside pole sitter Donny Lampman. The leaders would hit lap traffic at the midpoint of the event, just as Justin Ramsay would take over second from Chris Hale. Hale would be able to regain second and then take the lead away from Murray. The caution would fly for debris on the front straightaway with ten laps remaining. On the restart, Murray would look underneath Hale as Ramsay, Ken Sargent, and Steve Shaw racing in the top five. Murray would regain the lead on lap 21. Murray would go on to score the win.