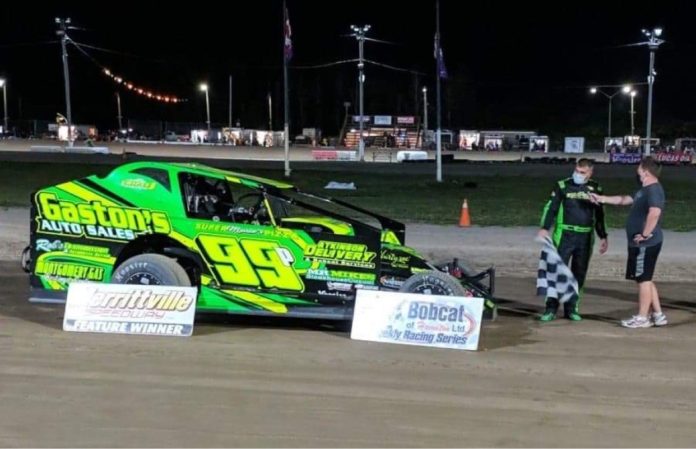 Taylor Vanderzanden and Jeff Panunte lead the field to green as the Rick’s Delivery Sportsman got underway in what was a wild feature, to say the least. Multiple yellow flags within the first 10 laps shuffled some of the normal front runners to the back, including defending track champion Brad Rouse. The largest melee took place off of turn four and saw as many as seven cars wadded up together. As the field settled in, a 5-car breakaway of race leader Greg Panunte, Chad Chevalier, Cody McPherson, James Friesen, and Brent Begolo was able to break away from the pack. Despite a close call on the final corner with a lap car, Greg Panunte was able to hold Chevalier to score the win.

Dave Bailey returned to action in the Hoosier Stock division after having to miss last Sunday’s event at Merrittville Speedway due to injury. Saturday night was a flawless performance for “Brewster Baker”. Starting from pole, Bailey was rarely challenged under green, eventually winning by a margin of 1.285 seconds over Steve Shaw Sr. Chris Hale was third followed by Donny Lampman and Tyler French.

The RONA Doidge Building Centre Modified Lites were back on track on Saturday in a feature that saw Josh Sliter pick up right where he left off last year, winning by over six-tenths of a second. Sliter was tasked with holding off a hard-charging Jeffery May on multiple restarts, however, May would have to settle for second. Qualifying heat race winner Brent Begolo would round out the podium.


In Central Fabricating/Glo and Go Tanning 4 Cylinder action, Fabio Olivieri and Austin Werstroh reversed fates from their qualifying heats to the main event. Earlier in the evening, it was Werstroh claiming the heat with Olivieri right in his tire tracks. By feature time, it was Olivieri making the most of pole position starting spot to win over Werstroh.
Jordan Fidler took the victory in the James Auto V6 class over John Couture. Fidler, the qualifying heat race winner took the lead early and never looked back to score the win.
Racing returns to Merrittville Speedway on Saturday, August 8 as the S&W Service Centre 358 Modifieds headline the show featuring the Hoosier Stocks, Central Fabricating/Glo & Go Tanning Mini Stocks, RONA Doidge Building Centre Mod Lites, and James’s Auto V6. Race time is at 7 pm.