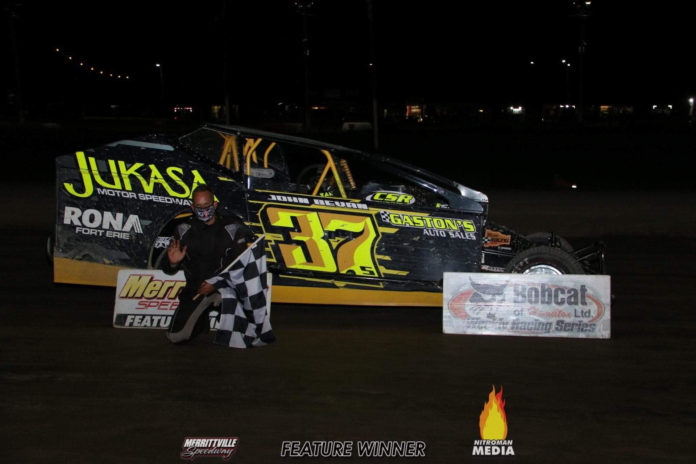 The S & W Service Centre 358 Modified feature saw Tyler Willard start on the pole with “Mr. Small Block” Pete Bicknell to his outside. Gary Lindberg made the most of his third-place starting spot to get the lead from Willard early. After multiple restarts with Willard to his outside, Lindberg lined up alongside Bicknell and was able to drive away, finding speed on the bottom line in 1 & 2, while running the top in 3 & 4. Willard would settle for second, while Mike Bowman drove from 13th starting position to finish third. Pete Bicknell and Fred Carleton rounded out the top Five.

Barry Beck and last week’s winner Dave Bailey lead the field to green in Hoosier Stock action. However, it was another defending track champion starting third on the grid in Rob Murray who would capture the victory. Bailey led early with Murray on his bumper for multiple laps. Eventually, Murray was able to slide by on the inside and take the win over Bailey, Donny Lampman, Ryan Beagle, and Steve Shaw Sr.

Defending track champions winning was a common theme as Josh Sliter won on Saturday night in the RONA/Doidge Building Centres Modified Lites. Sliter, who started from pole, was strong early but Jeffery May began to reel him in halfway through the race, gaining .2 seconds per lap on the leader before a caution. On the restart, Sliter was able to drive away from May and hold him off to win on back-to-back Saturdays at Merrittville Speedway.

In the Central Fabricating/Glo & Go Tanning 4 Cylinder event, Austin Werstroh controlled most of the race, leading Rob Goulding, Leroy Buscumb and Jay Moulton. However, several cautions never gave Werstroh the chance to get away from the pack. Goulding eventually got by Werstroh, whose front-end bodywork was damaged and may have affected his car. Goulding held off Buscumb to take the checkers driving for Jay Moulton.

Pontiac power propelled Josh Dmytrow to victory lane in the James Auto and Speed V6’s. Rick Beales started from the pole and was strong early, with Dmytrow starting to his outside. In the end, it would be Dmytrow who was able to take the lead and hold off a charging John Couture late to get the win.

Fans are encouraged to keep up to date with all the schedules and if any changes are needed by following Merrittville on social media including Facebook (facebook.com/MerrittvilleSpeedway), Twitter (@Merrittville), and now on Instagram (@merrittvillespeedway).

For results, point standings, and more, check out www.merrittvillespeedway.com